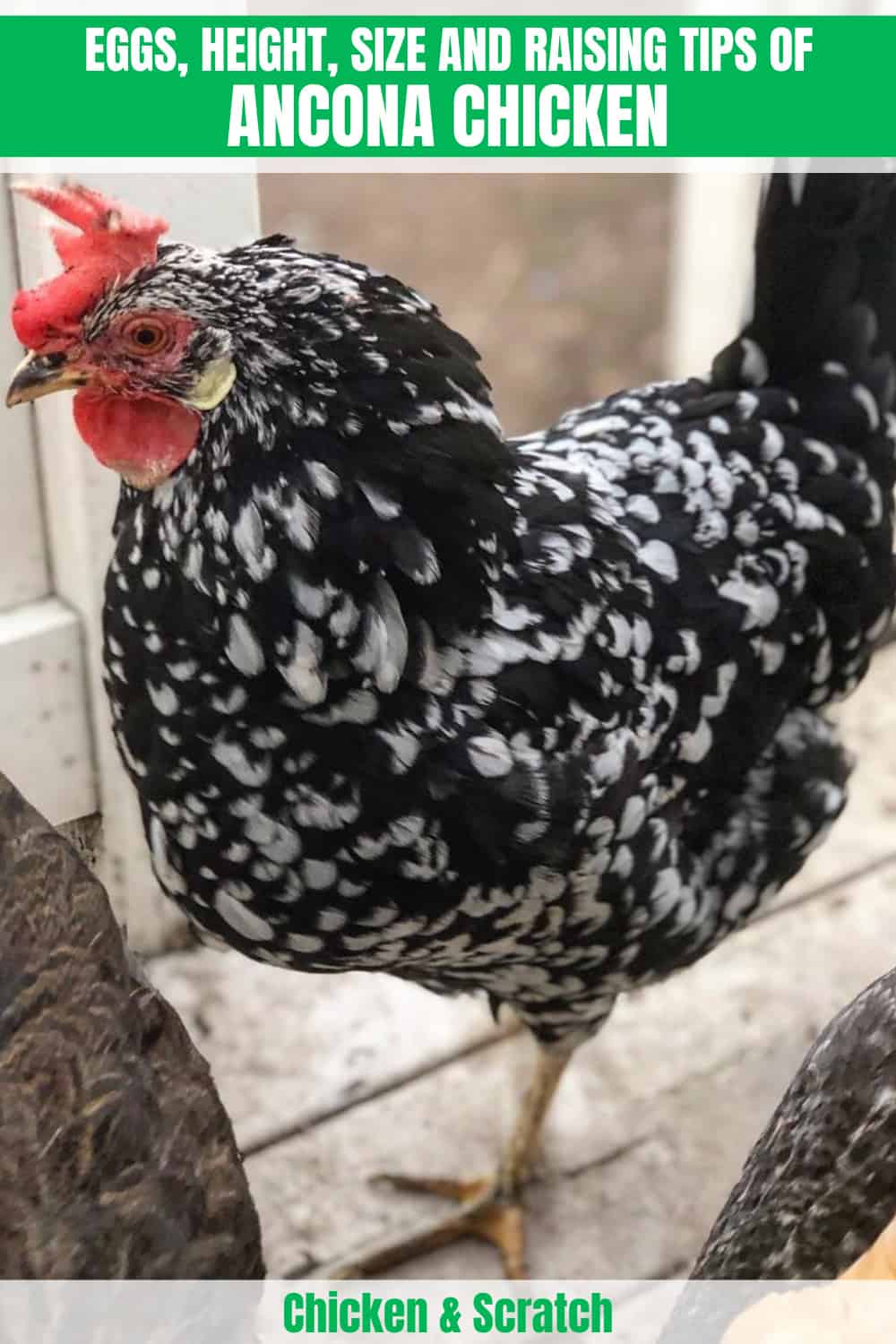 The Ancona Chicken, also sometimes called the Black Leghorn or Mottled Leghorn is a breed of chicken that first originated in Italy. While this breed was mainly developed to provide a hardy fowl that would produce a lot of eggs, but as far back as the 1800’s, it began being bred specifically for its showy appearance as well as for its usefulness.

Attractions Of The Ancona: 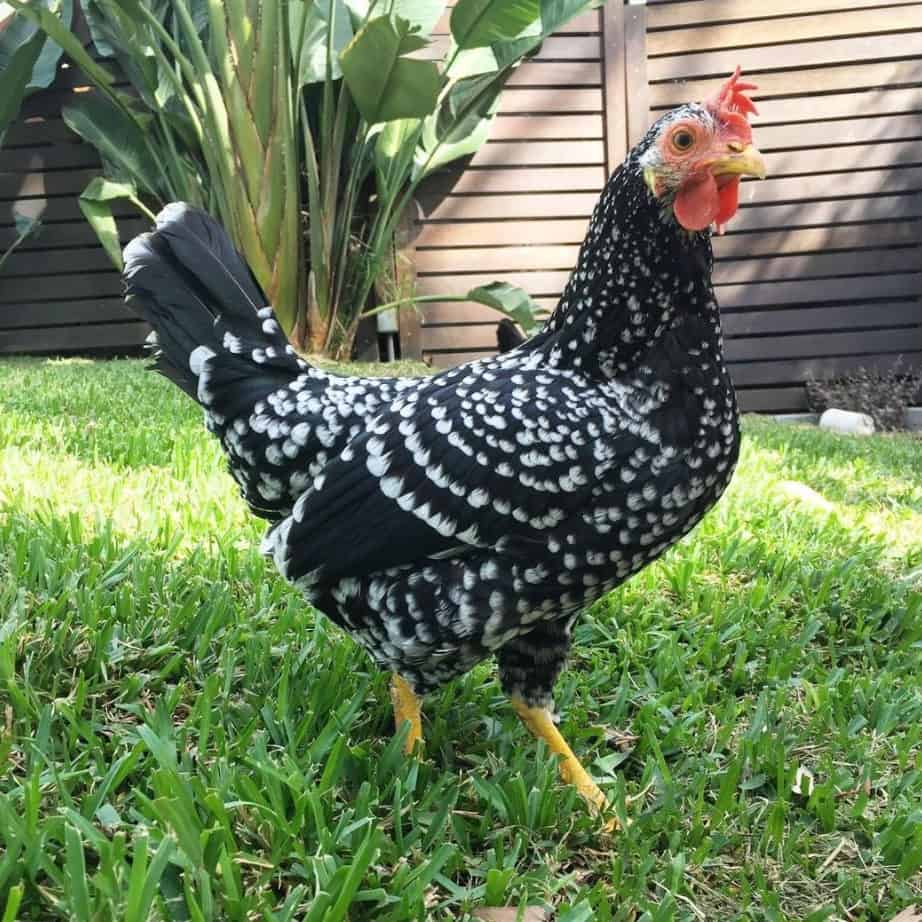 Background And History of Ancona Chicken

The name of the breed comes from the capital city of the same name in the Marche province of Italy. The Ancona was a staple farmyard hen for centuries in Italy before it was discovered by farmers and breeders of other countries.

In the mid 1800’s, Anconas began to appear in the United Kingdom, and a little while after this, the breed was also brought to the United States. Various breeds, including Leghorns, were used in the original breeding of the Ancona chicken. Because of their partial Leghorn ancestry, they are sometimes known as Black Leghorns.

There are two types of Ancona: the single-comb Ancona and the rose-comb Ancona. The American Poultry Association accepts both of these types as official breeds, however, in Italy, only the rose-comb is considered a valid breed.

The single-comb Ancona was recognized as a standard breed by the American Poultry Association in 1898. By 1914, the rose-comb was also recognized as official in the USA. 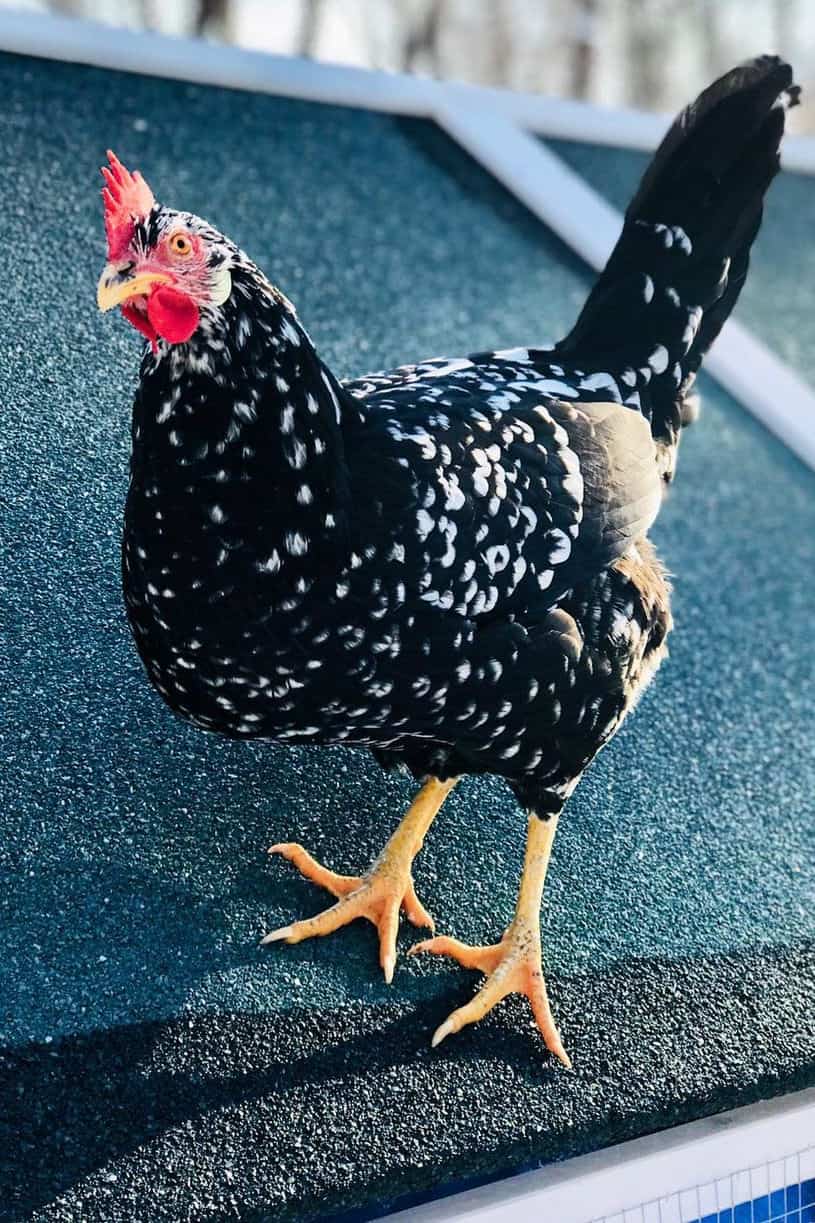 The Ancona is a wonderful show bird. These attractive chickens are considered one of the prettiest birds you will see at a poultry show. Even the chicks have a distinguished and lovely appearance.

Adult hens and roosters of the Ancona breed sport shiny black feathers that are mottled with white tips. The best examples of the breed will have white tips on every fifth feather.

However, it is fairly common in the breed to see the white tips as frequently as every third feather. The white tips will also become larger with every molting, and thus the spots on the feather tips can give some indication of the bird’s age.

Anconas have yellow legs and beaks. Sometimes the legs will show some black mottling. Their beaks have black stripes on the upper mandibles. They have white patches below their eyes on either side of the head. Females will reach around four and a half pounds at maturity and males six pounds or a little over. They are considered medium to large breeds.

Both male and female chicks hatch with mostly overall yellow down accented by black on the tops of their wings. Sexing Ancona chicks while they are very young may prove difficult since males and females are very similar in appearance.

The Ancona chicken breed has a very interesting personality. These birds are often described as social, active, intelligent and entertaining. They also have some wild tendencies, such as their distinguished skill at flight.

These chickens like to explore, which makes them great free-range chickens. Of course, you will have to keep an eye on these fliers if you intend to let them roam free. They have more stamina for flight than most other chicken breeds, and keeping a netting over the top of your coops and backyard is vital to ensure that you don’t permanently lose any birds. 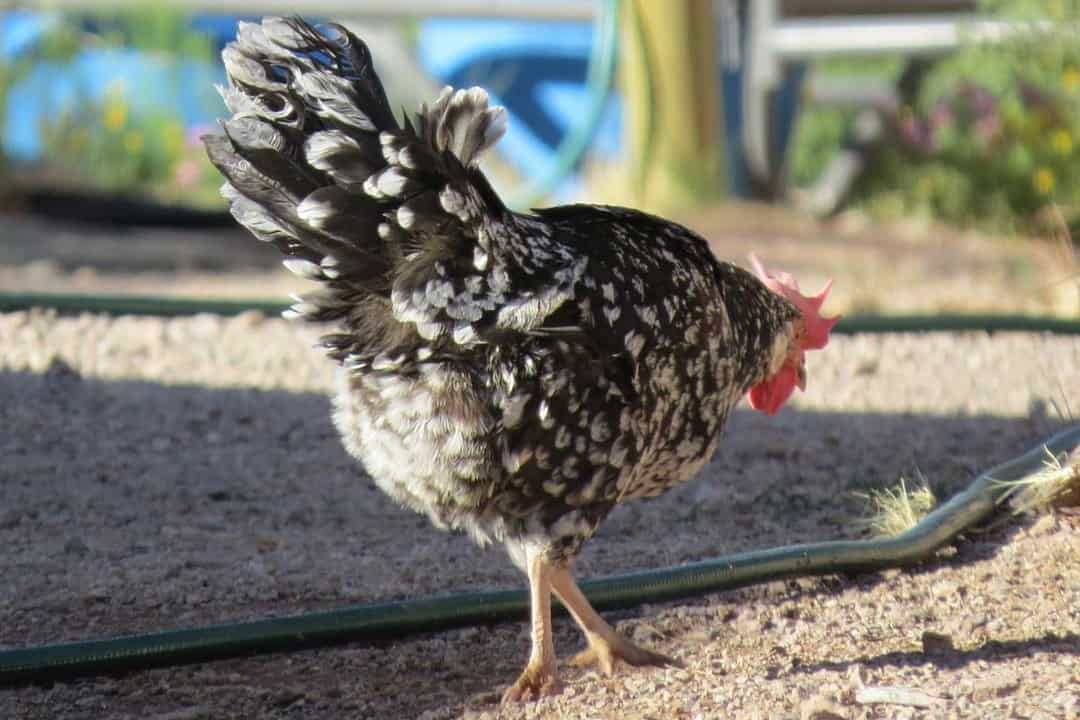 Also purported to be talkative and even affectionate, some say that the Ancona breed makes as good a pet as it does a livestock bird. Even the roosters of this breed have been known to be friendly towards children.

Not only will your Anconas want to socialize with you, but they are also highly interested in befriending all the other breeds in your flock. However, while Anconas are generally very friendly, you should still introduce them slowly to other chickens as some breeds may not be too enthusiastic about their vivacious personalities. 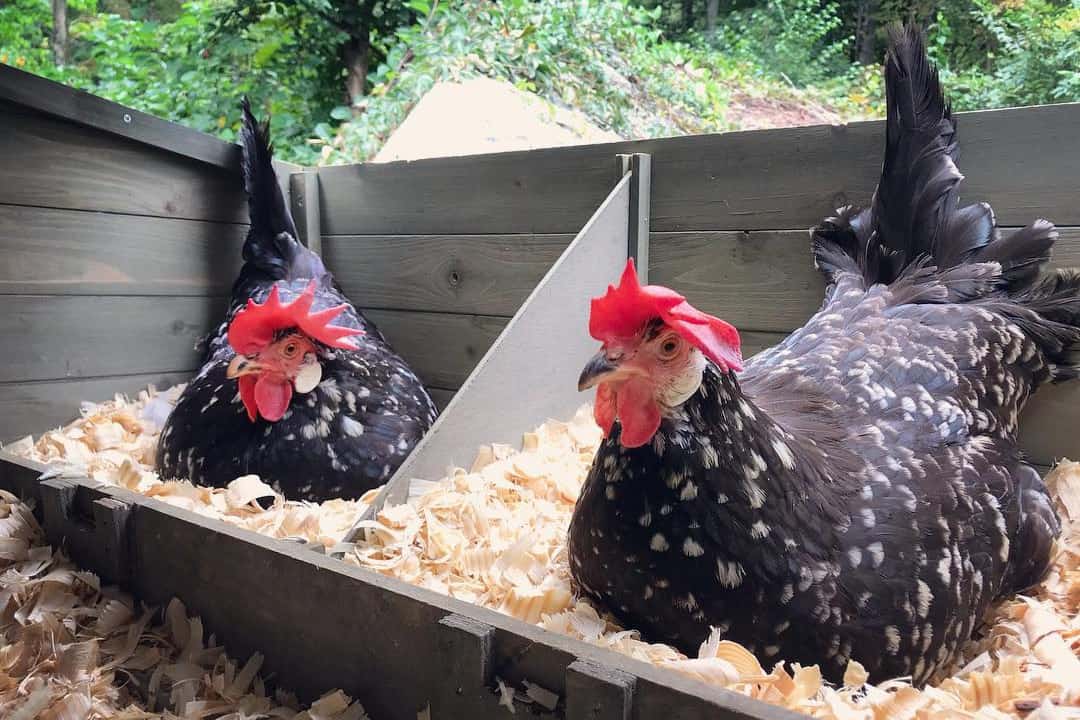 Sources differ on how many eggs you can expect from this breed. However, it seems that, on average, the Ancona hen will lay anywhere from 180 to 280 medium-sized to large eggs per year. She will generally start laying around twenty weeks of age and will lay year-round.

These chickens are so unperturbed by the cold weather that they will happily continue to lay at the same average during the winter as they do in the summer.

Clean and dry nesting areas are essential for the Ancona, even if she is free-range. If your chickens do not roam free, provide them with nesting boxes and regular fresh hay or straw. Free-range hens may enjoy creating nesting opportunities in the brush, forest undergrowth or dry leaves.

However, if you do not live in an area with many natural nesting materials, you should add some materials to the free-range habitat so that your hens can find adequate nesting opportunities.

Laying hens will need extra protein and calcium in their diets to encourage high egg production. You can supply this extra nutrition, in part, by allowing your Anconas to be free-range birds.

However, you should also offer supplemental meal or table scraps to your hens from time to time to ensure that they are getting an adequate supply of necessary dietary components. 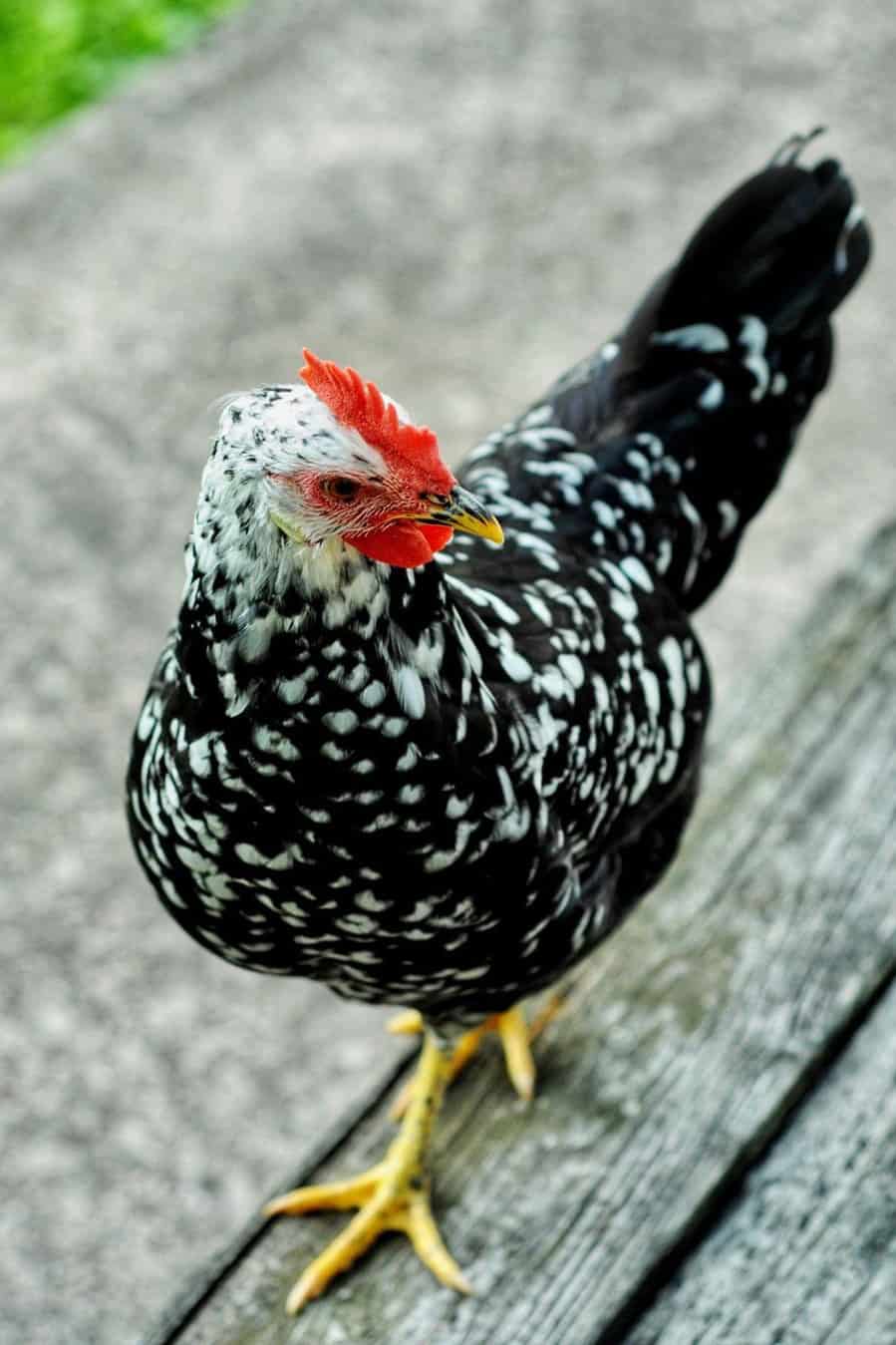 The Ancona is a fairly hardy breed that does not generally require much healthcare. Generally speaking, it is advisable with any breed to find out what vaccinations your birds have had, if any, prior to purchase. You can administer many vaccines yourself, if necessary, but it is widely encouraged that all chickens receive the Marek’s Disease vaccine.

While the birds have showy feathers, they do a fine job of preening themselves, so you shouldn’t need to do much if any grooming. However, you should still regularly check your birds for parasites like mites, lice and ticks. This site also recommends a regular deworming of your chickens, both for their health and for the health of any children you may have the birds around. 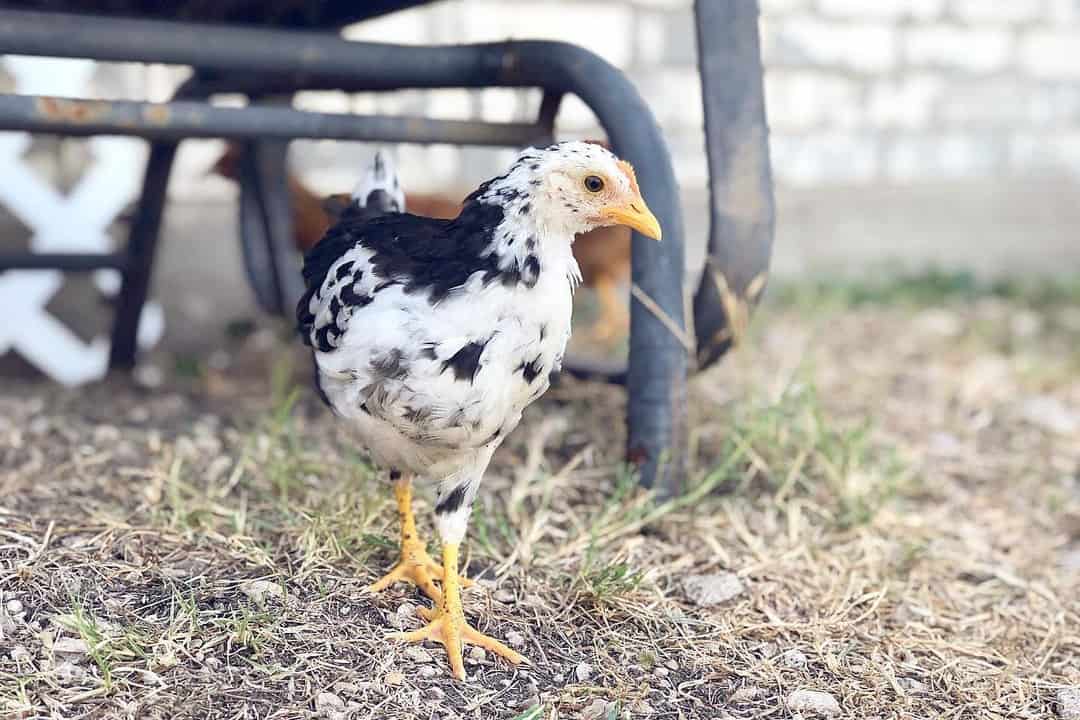 These chickens are also very active, and they love to forage, so you shouldn’t need to clip their toenails. You may choose to clip their wings to prevent them from flying away.

Because they are social birds, you should start with a flock of no fewer than three Anconas. They need other chickens to interact with to prevent boredom and aggressiveness.

You’ll also want to visit your flock regularly, not merely for feeding and other care. Both the roosters and hens love interacting with humans, and they have been known to follow their caregivers or even run up to meet them. 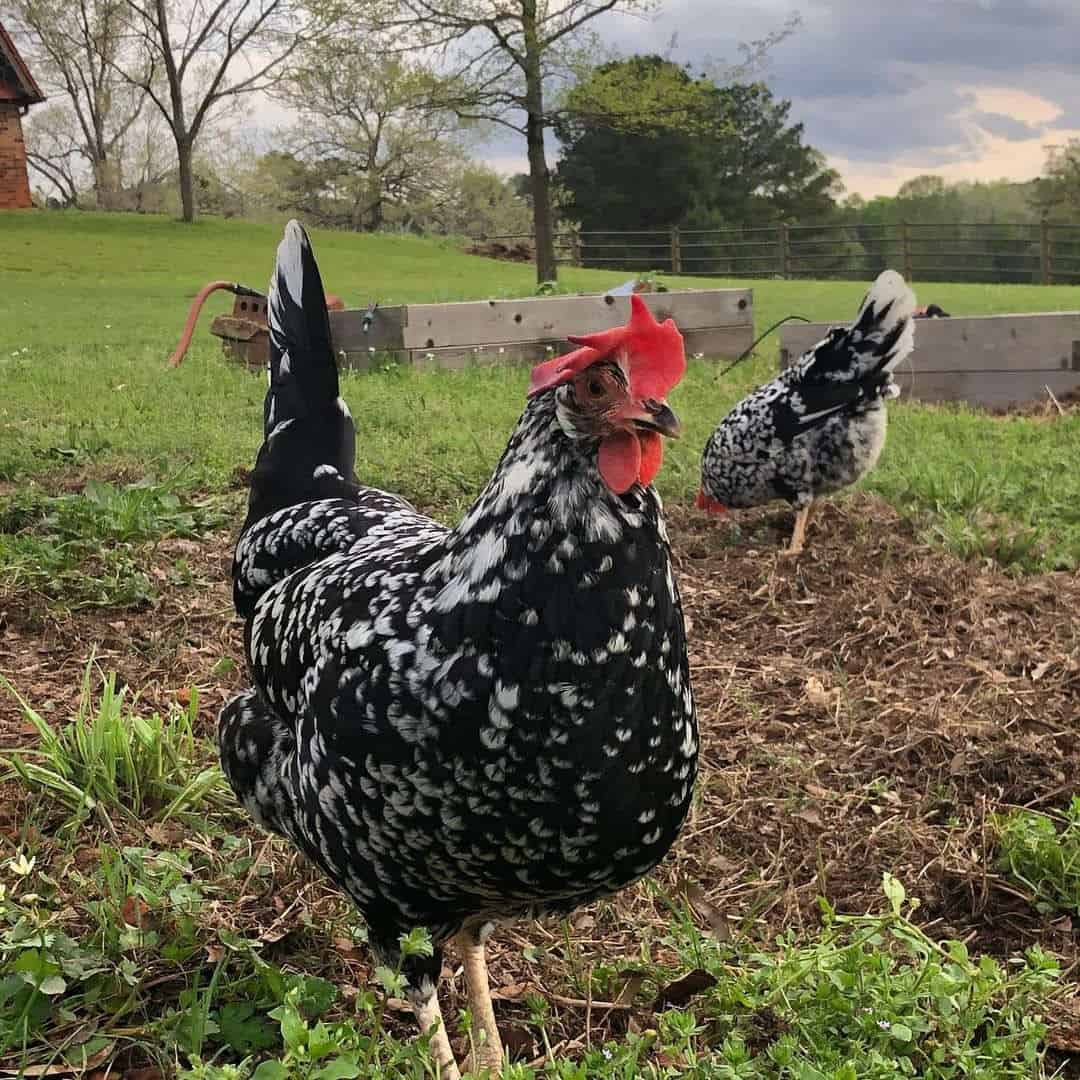 Since the Ancona breed is set to a “watch” conservation status, check with local authorities and conservation centers before purchasing any birds. Some areas may have special regulations are required for keeping the breed.

One of the reasons this breed can be inexpensive to raise is that they will happily forage and also eat table scraps. Root vegetables and greens, such as turnips, kale, cabbage, lettuce and swiss chard, make for some of the best “practically free chicken feed” you can get your hands on.

Since these veggies are easy and inexpensive to grow, you can readily supply your Anconas with a smorgasbord of fresh organic produce. You can also feed your Anconas any of the following: oats, rice, corn, peas, cabbage, broccoli, cherries and apples. 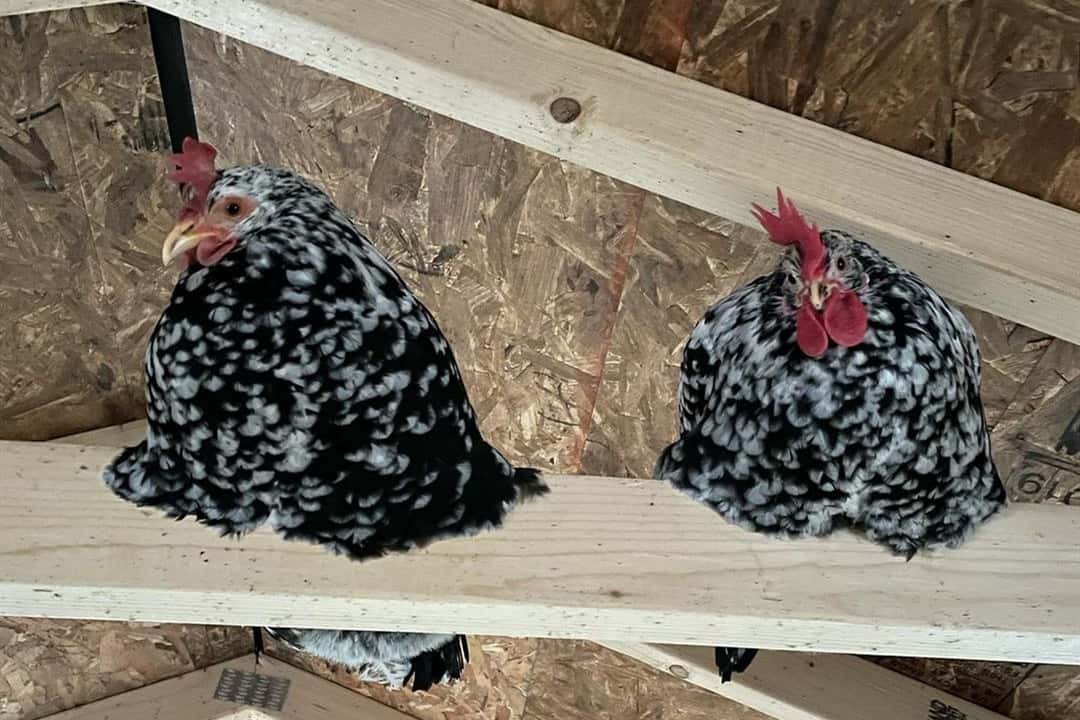 These chickens do love space, so try to supply them with both a large chicken coop and an open yard area. A coop run is really necessary for any chicken breed that flies as it will allow them the space to exercise and play without the possibility of escape.

Nesting boxes and roosting rails are also a good idea to ensure that hens have a warm, dry place to lay their eggs, and all the birds have comfortable, above-ground resting places.

To sum up, the Ancona is a beautiful and entertaining bird that is fairly easy to raise and that provides a high egg production. There are really far more reasons to raise this breed than to not, so why not add a few of these showy birds to your flock? With their social temperament and humorous antics, you’ll likely find as much joy in raising Anconas as you do practicality. 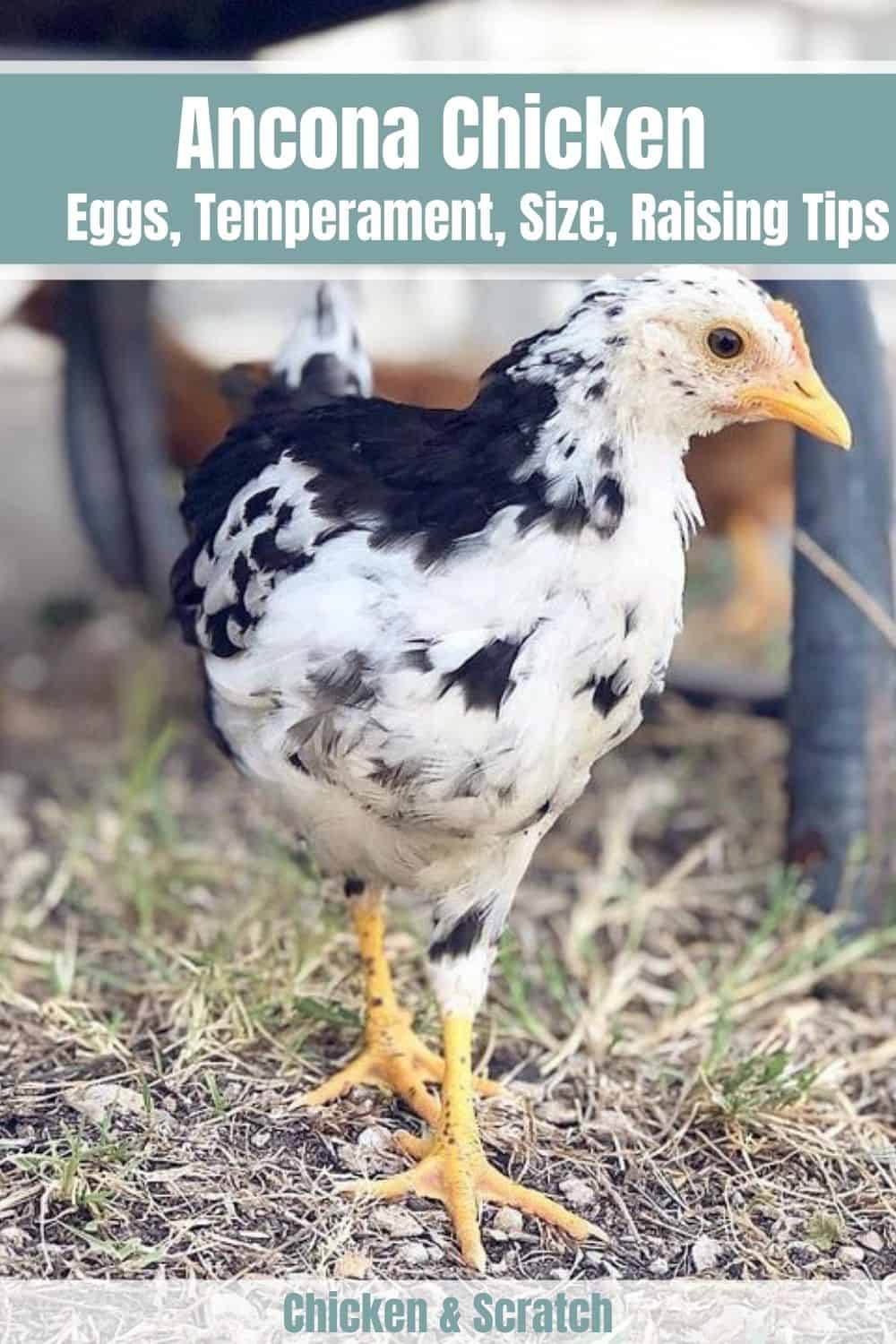