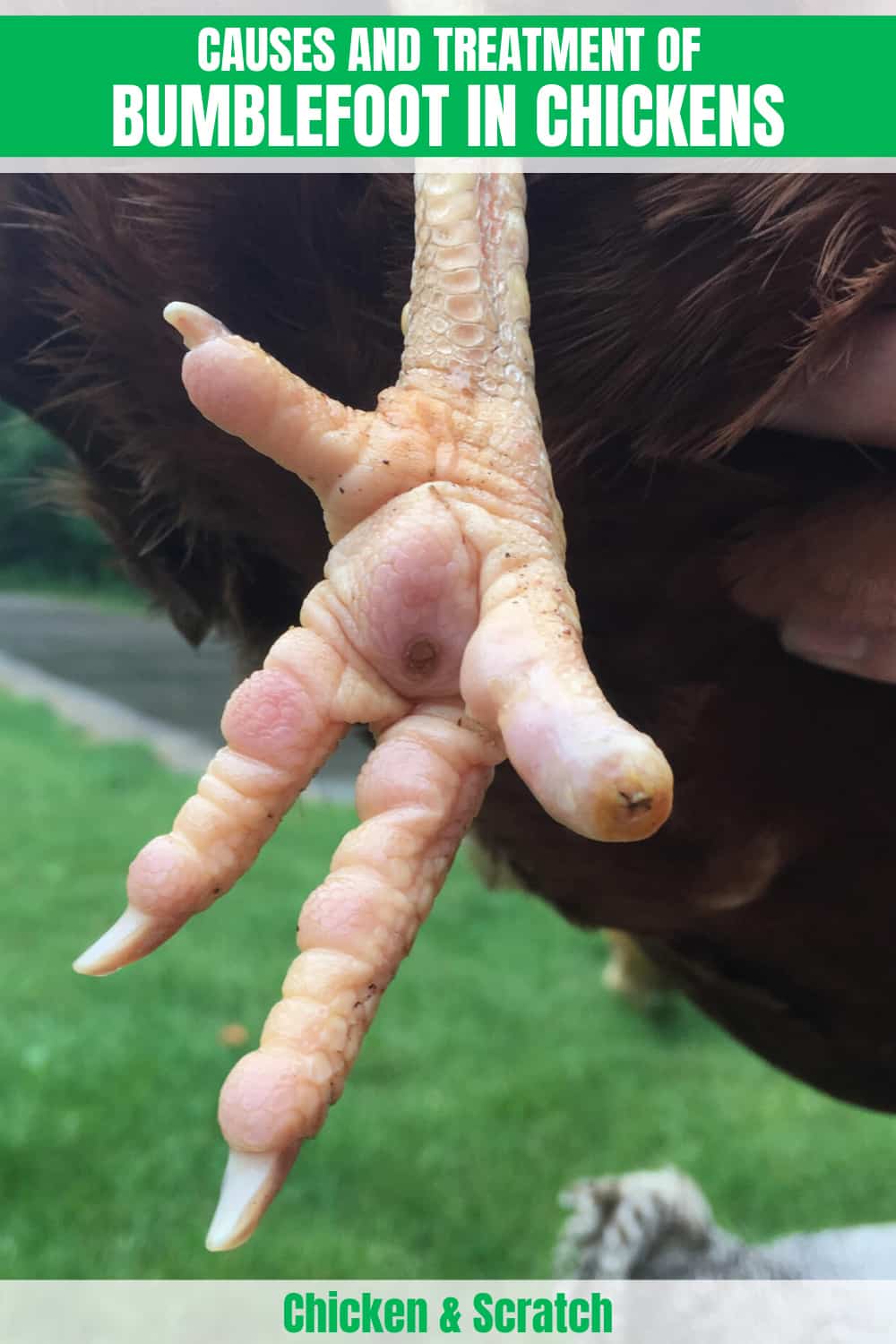 Bumblefoot also referred to as foot bubble or ulcerative pododermatitis (the scientific name) is a very serious condition for chickens. It’s a dangerous bacterial infection that becomes inflamed and noticeable when hard round lumps form on one or both of a chicken’s feet.

Bumblefoot has the ability to move beyond the surface of the feet into deeper structures of the chicken, such as tendons and joints. When left untreated, it can spread into the chicken’s bloodstream. 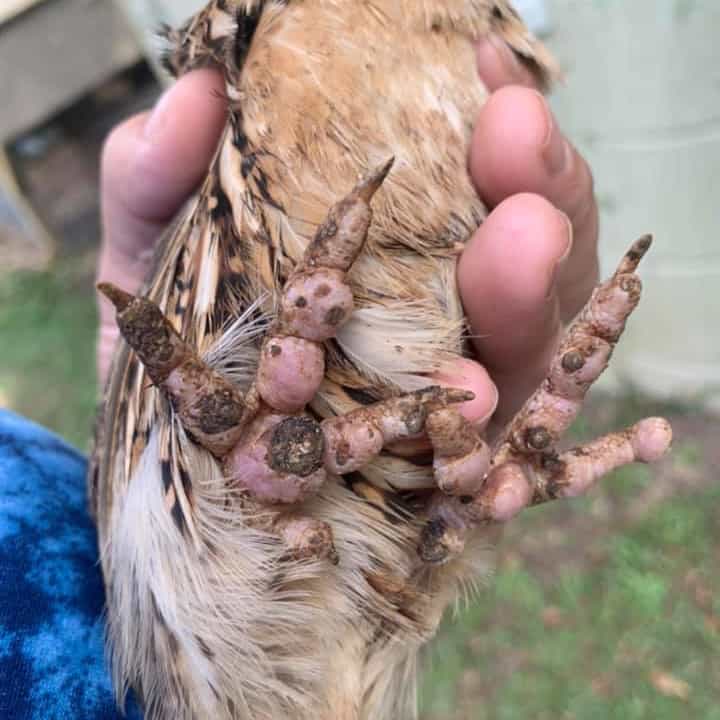 The infection is normally a direct result of certain bacterias, such as Escherichia coli (E. coli), Pseudomonas or Staphylococcus that form cysts in the tissues of the foot. Once established, the infection progresses quite rapidly forming an abscess or chronic outward wound.

Harmful bacteria gain entry into the foot of a chicken through an open wound. This could be in any part of the chicken’s foot. The condition is most common in backyard flocks and typically indicates bad coop hygiene or poor husbandry.

A common question about bumblefoot is if it’s caused by walking on wet ground. While wet ground doesn’t cause bumblefoot on its own, it can make it more likely that a chicken will contract it. However, the true cause of bumblefoot is most often square or sharp edges on perches or rough edges on the chicken’s nesting boxes.

It’s important to note that metal nesting boxes that are pre-built are especially bad because a lot of them have ultra-fine edges that easily slice through the foot of a chicken.

Chickens in the wild are known to nest in places like tree limbs that have round perches. The perches you provide in the coop should be the same or similar.

Some of the major bumblefoot risk factors are: 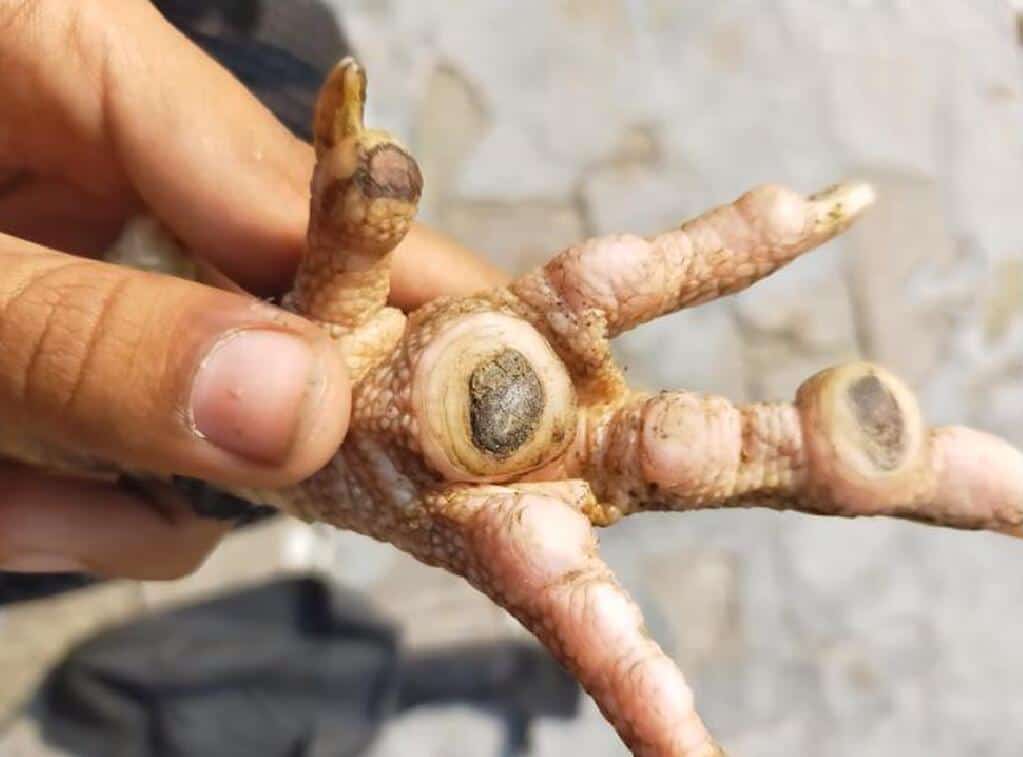 Visible signs of bumblefoot include discolorations or abrasions and noticeable wounds on the bottom of the feet. As the infection progresses, you’ll notice more severe symptoms such as hobbling or overall lameness.

The chicken’s feet might be hot to your touch, which is not normal for healthy chickens. During later stages of bumblefoot, their feet might smell.

Bumblefoot is diagnosed by behavioral and physical examinations. Look at, and feel, their feet and keep a close eye on how they move. Bumblefoot that has progressed to later stages could require an x-ray to see if it has spread to any bones or joints.

The infection is graded on a 1 – 5 scale, with 1 being a mile form of bumblefoot and 5 being a severe case.

Stage 1. This is the very beginning of the infection. It’s characterized by a shiny patch that’s slightly raised on the bottom of the foot.

Stage 2. In this stage, there’s the beginning of a sore on the chicken’s sole. The infection has started but hasn’t begun to swell yet.

Stage 3. Abscesses start to form and swelling becomes visible, although you may not be able to notice the chicken limping. Dead or necrotic tissue forms and has a cheese or butter-like appearance. The feet can start to smell as well.

Stage 4. In this advanced stage, swelling and infection have spread beyond the tissues and into bones, joints and tendons. The wound has become chronic and will not self-heal.

Stage 5. The foot becomes permanently infected and crippled. The infection becomes so bad that it begins to spread throughout the foot and is visible on the top of the foot as well.

Untreated bumblefoot can begin to develop into a sore that consumes the entire foot of the chicken, causing lameness.

The infection doesn’t often heal without treatment because of a chicken’s slightly odd foot and leg structure. If you leave it untreated, you’ll end up with a bird that’s 100% lame and in a lot of pain. 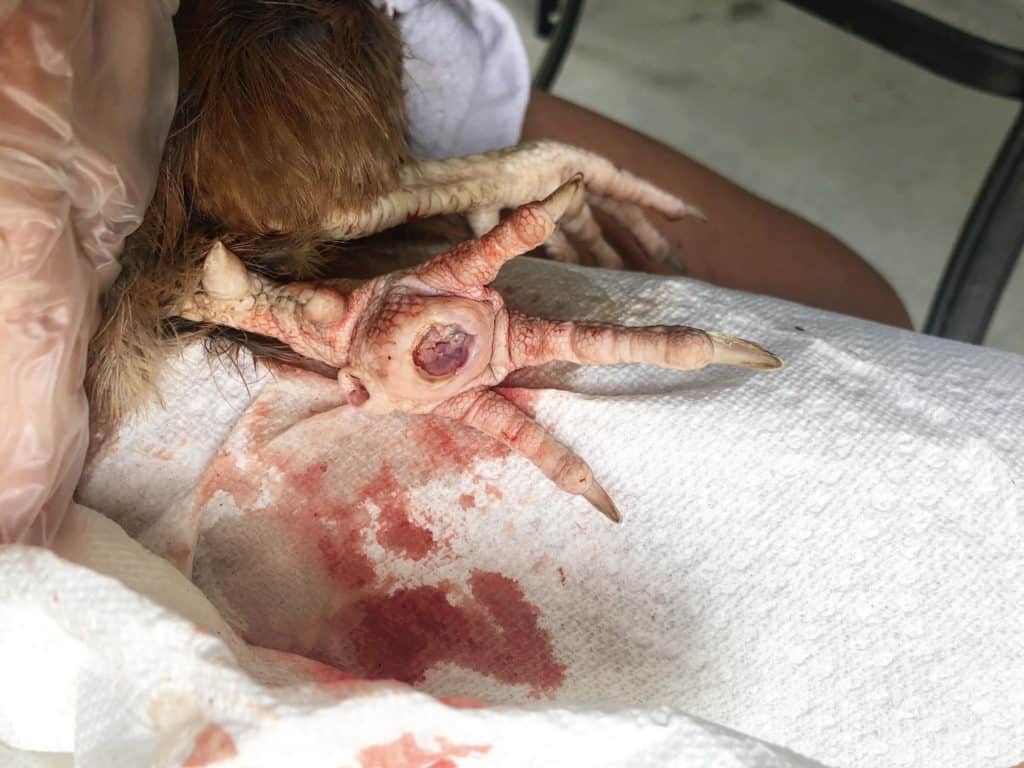 The process of treatment begins with wrapping your chicken up in a towel. This will keep it in the dark and stop all the flapping. The treatment performed to rid your chicken of early-stage bumblefoot involves emptying out the foot’s cavity, then cleaning out the wound. After you’re done, you want to cover the wound with a sterile dressing.

In more advanced stages, the infection will need to be removed by a trained veterinarian.

It’s important to quarantine chickens that suffer with bumblefoot. Also, don’t allow them to perch for a minimum of two weeks until the foot has fully healed.

Under most circumstances, veterinarians won’t prescribe antibiotics for bumblefoot, unless the infection has spread to joints or bones. 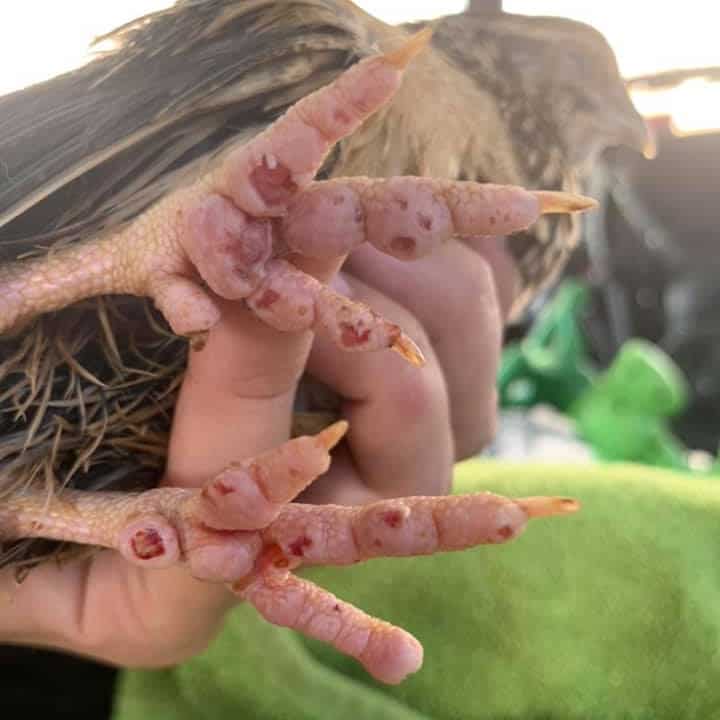 Natural treatments are the best option for birds suffering from bumblefoot that haven’t yet had the infection enter the foot.

For natural treatments, first, you want to separate the infected bird from the rest of the flock, then:

Of course, infections that have progressed beyond stage three should be treated by a professional. But you should still use natural treatment methods to support a faster healing process.

Can Bumblefoot Be Lethal?

This condition is very rarely fatal. However, untreated cases that are extreme can kill chickens. When their feet are extremely sore, they start to lose interest in perching, dust bathing and eating.

The condition can be lethal to a chicking if:

Chickens have been known to die from complications of untreated bumblefoot. But if the condition is treated properly, death is not likely.

Can I Eat Eggs From a Hen Suffering From Bumblefoot? 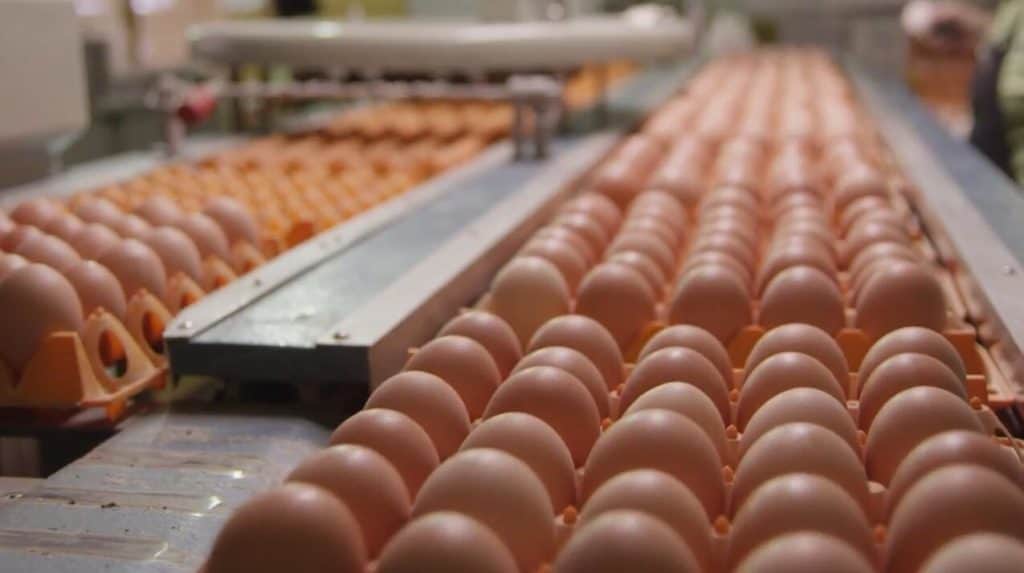 Unless the chicken is undergoing antibiotic treatment, it’s perfectly safe to eat eggs from a hen that has bumblefoot.

If your hen is undergoing antibiotic treatment, it’s best to not eat the eggs for at least seven days after the treatment is completed.

Can Other Chickens Catch Bumblefoot?

Bumblefoot is not contagious. Chickens can’t catch it from each other. But if one chicken has bumblefoot, there’s a high likelihood that other chickens will get it as well.

Bacteria that cause bumblefoot are literally everywhere. If one chicken is suffering from bumblefoot, that means that the conditions are present in your pasture, coop or run for other chickens to contract it as well.

But they don’t “catch” it from one another.

Are Certain Breeds at More Risk Than Others? 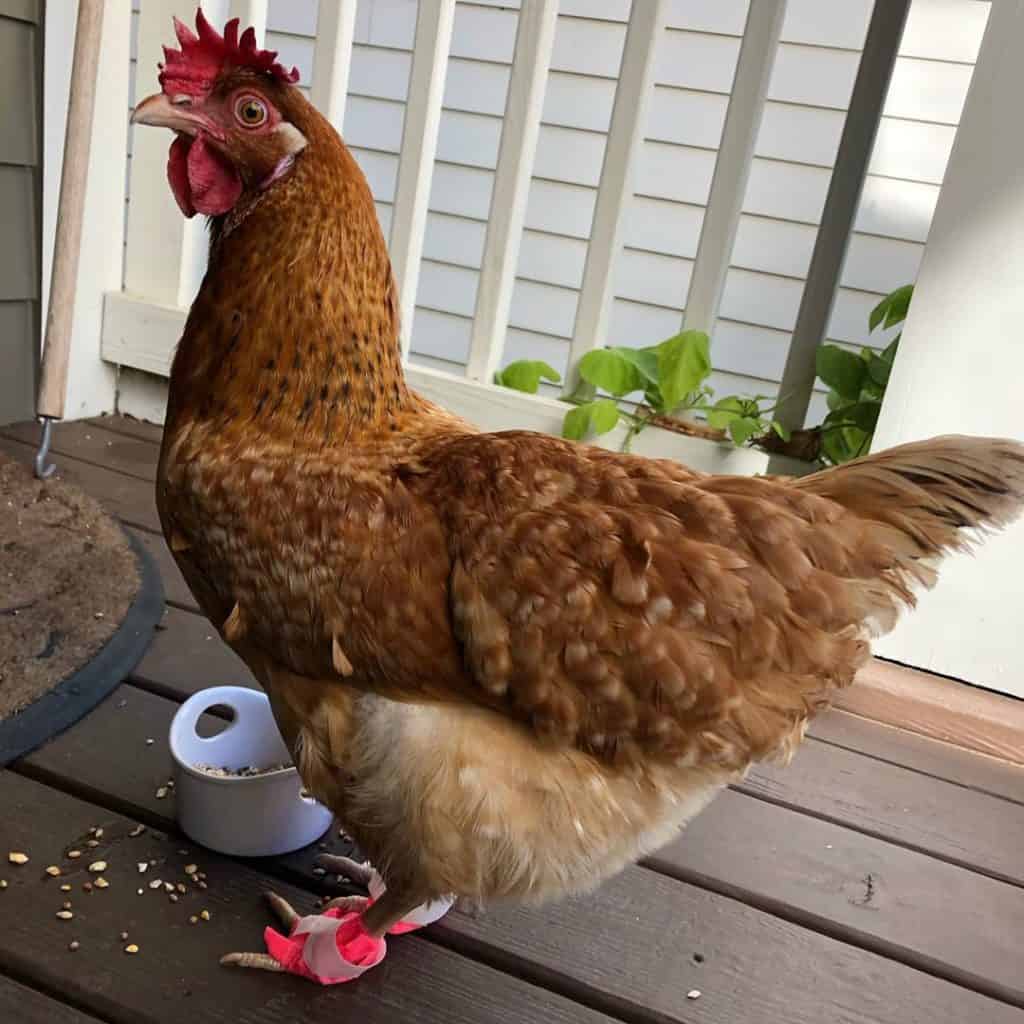 The answer to this seems to be yes. Breeds with feathered feet or extra toes tend to be more likely to contract the condition.

However, the conditions in which chickens are kept is a far greater concern than their breed.

Do People Ever Get Bumblefoot?

It’s possible for a person to get infected with bumblefoot, but it’s impossible to “catch” from a chicken.

The abscess in the foot of an infected chicken is full of harmful bacteria. Take a lot of care when you treat and handle the birds.

What About Ducks and Other Forms of Poultry?

Bumblefoot is common in all domesticated waterfowl and poultry, like ducks, quail, guinea fowl and chickens. Any consistent walking on sharp, rough or hard surfaces can cause tiny wounds on the bottom of any poultry’s feet.

If you keep ducks on hard ground out of the water, they’re much more likely to contract bumblefoot.

If it’s treated quickly, the prognosis of bumblefoot is very good. If the condition is allowed to progress and fester, the overall prognosis tends to get worse.

Avoid allowing the infection to spread into a chicken’s bones, and you’ll be able to keep them safe from further harm and working toward recovery.