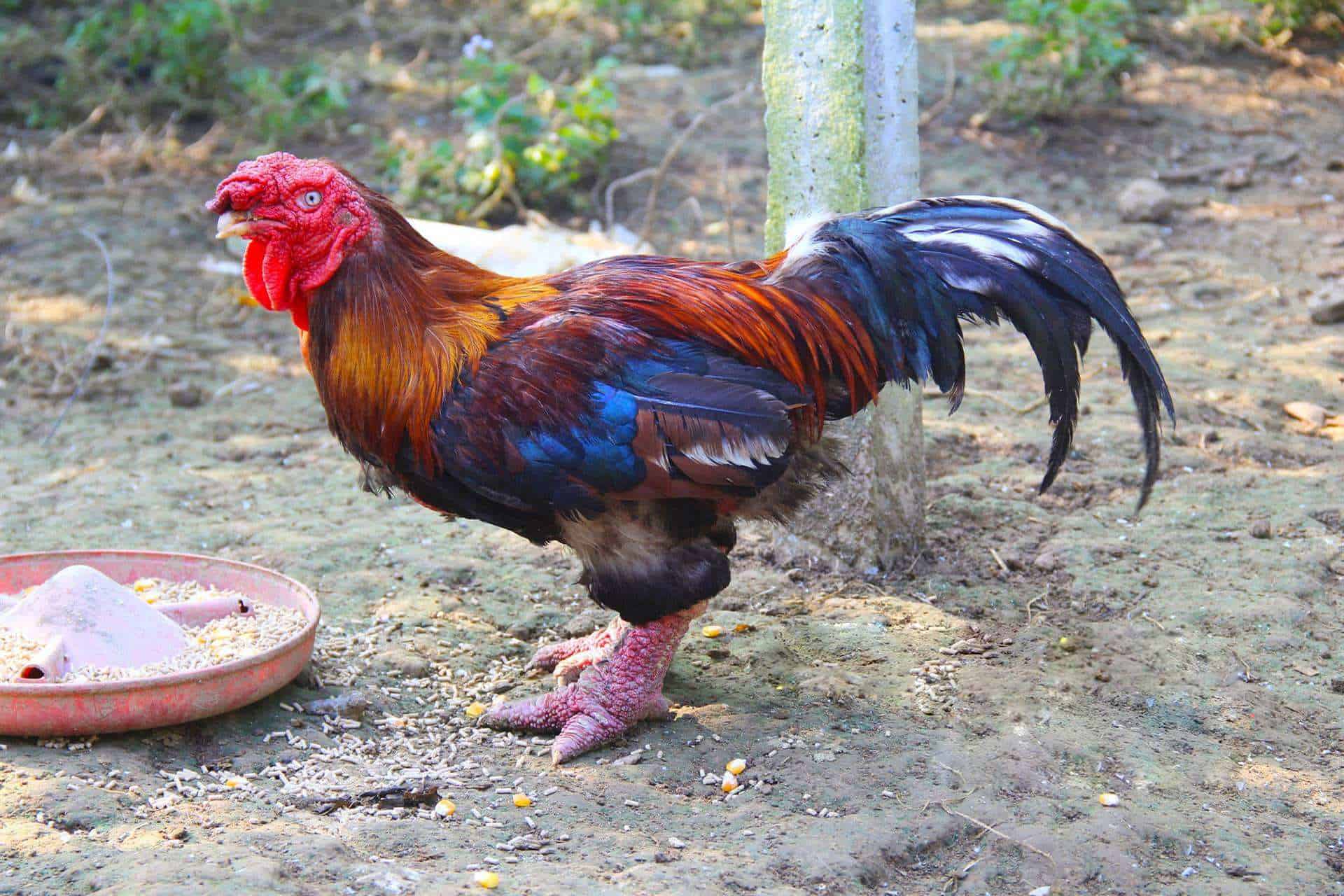 What rare breed of chicken, raised near Hanoi, lives on crickets, has enormous feet, sells for $2,000 each for meat, weighs 6 to 16 pounds, and takes 8 months to 1 year to be ready for market? The Dong Tao “Dragon” Chicken, once bred in Viet Nam only for royalty.

Dong Tao Chicken is served in luxury restaurants. It is prized for its delicate and delicious meat. Dong Tao Chickens (ga Dong Tao in Vietnamese) are raised for meat, for eggs, and also as pets. They are very popular in Vietnam.

But Dong Tao Chickens were once bred only for royalty and their mandarins (bureaucrats), or for ritual offerings, starting in Đông Tảo, in the Khoái Châu district, about 18 miles from Hanoi, not far from Hoa Lu, the ancient royal capital of Vietnam.

Because these very large chickens with thick, scaly, dragon-like legs and feet are very rare, and because they take 8 months or more to reach maturity—chickens more typically mature in 16 to 24 weeks, a female-male pair of Dong Tao Chickens can sell for as much as $2,500.

DomesticAnimals.com ranks Dong Tao Chickens as the rarest in a top 7 list of rare chicken breeds, not just in Vietnam, but in the world, including countries such as Poland, Germany, Japan and the US. 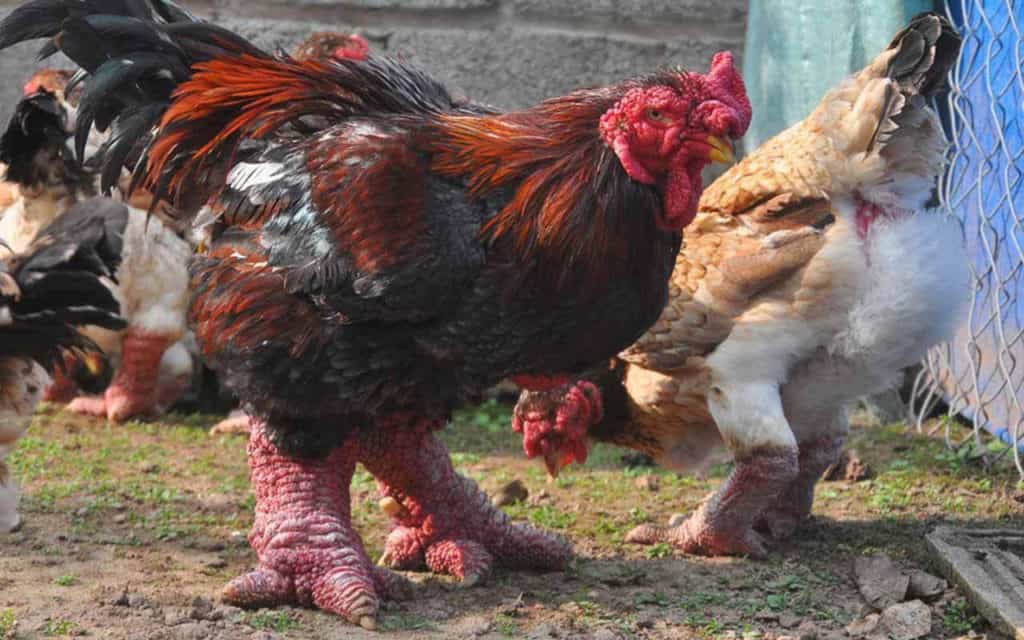 Vietnam festivals required many compulsory rituals. The Dong Tao Royal Chickens would have been one of the many integral parts of these rituals, especially during Tet Lunar New Year’s family reunions.

Traditions and festivals included thousands of people, many gods and offerings to gods, and drums, gongs and firecrackers.

Dong Tao Chickens would have cut a dashing figure and would have held great significance and honor, in royal ceremonies, or as food fit for an emperor and his royal family.

Dong Tao Chicken is considered unique among dozens of chicken breeds in Vietnam.

The legs of Dong Tao Chickens grow as thick as a human’s wrist. The size of their legs is not just unusual for chickens; it is rare for any kind of bird their size

The biggest pair of Dong Tao Chicken legs possibly on record, are soaked and preserved in alcohol. Each leg weighs 1 kg (2.2 pounds).

Part of the reason for the high price per chicken is that it can take 8 months to 1 year for a Dong Tao chick to mature. Typically chickens reach sexual maturity and begin laying eggs at 16 to 24 weeks.

Dong Tao Chickens look like they could tear you apart, but fortunately, as one breeder in Germany puts it, Dong Tao Chickens are good-natured with a calm temperament, and they develop trust with humans quickly and easily.

They can be cold-sensitive because it takes time for their full plumage to grow out, but once they have all of their feathers, they can manage fine walking around in the snow. They are sensitive when the weather changes.

Their knees are bent inward, which can seem awkward, but this seems to work to their advantage in balancing between their very large legs and very large feet.

In general, it’s not unusual for chickens to occasionally fly over fences, as high as 4 to 6 feet and sometimes even more. Normally this is in search of food, and they return to their coops after that. In spite of their tremendous bulk and size, Dong Tao Chickens can fly too, but not higher than 3-1/4 feet (1 meter). 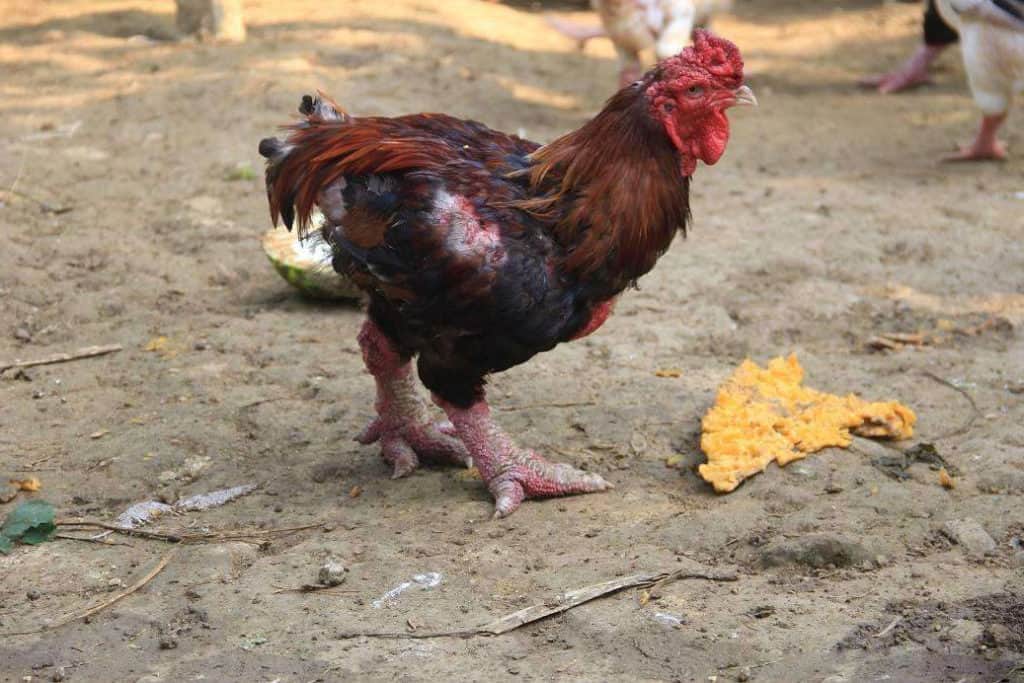 Dong Tao Chickens can be bred specifically for meat or for their eggs.

Because of difficulties raising Dong Tao broody hens for their eggs, raising Dong Tao Chickens for meat is more common. However, Dong Tao chicken hatching eggs can be purchased in the United States for $51-$55 per half dozen. 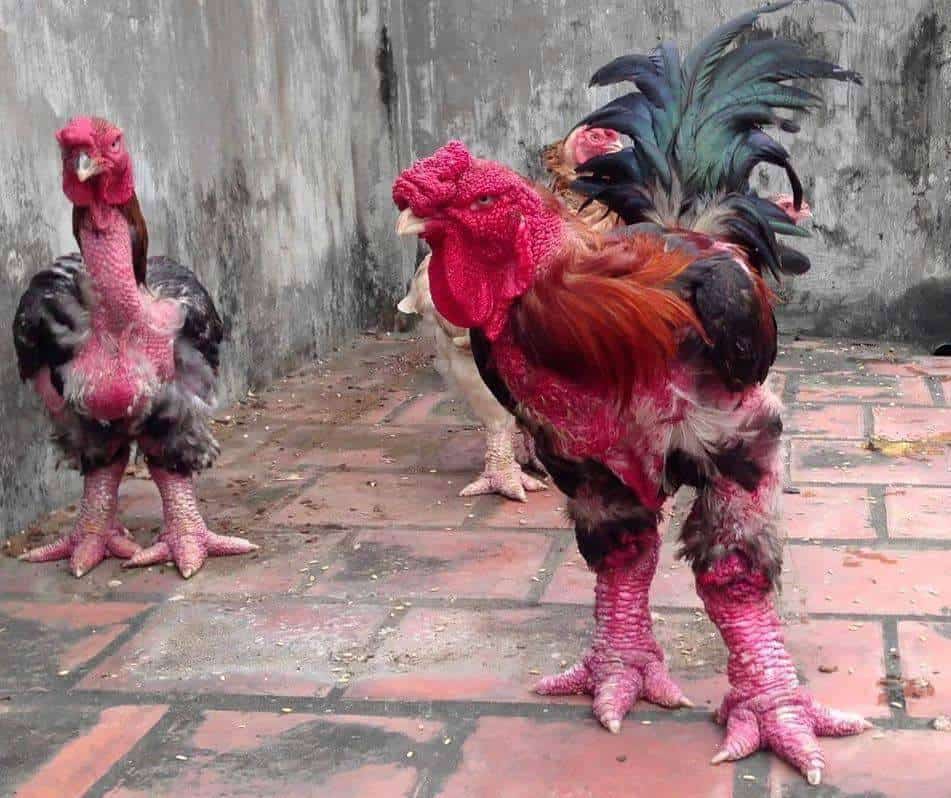 Dong Tao Chickens are usually considered healthy in spite of their unusual bulk but are known to be very sensitive to weather changes. Nevertheless, once a particular weather pattern settles in, such as cold weather or snow, they adjust very well.

Legs are stout but fragile. 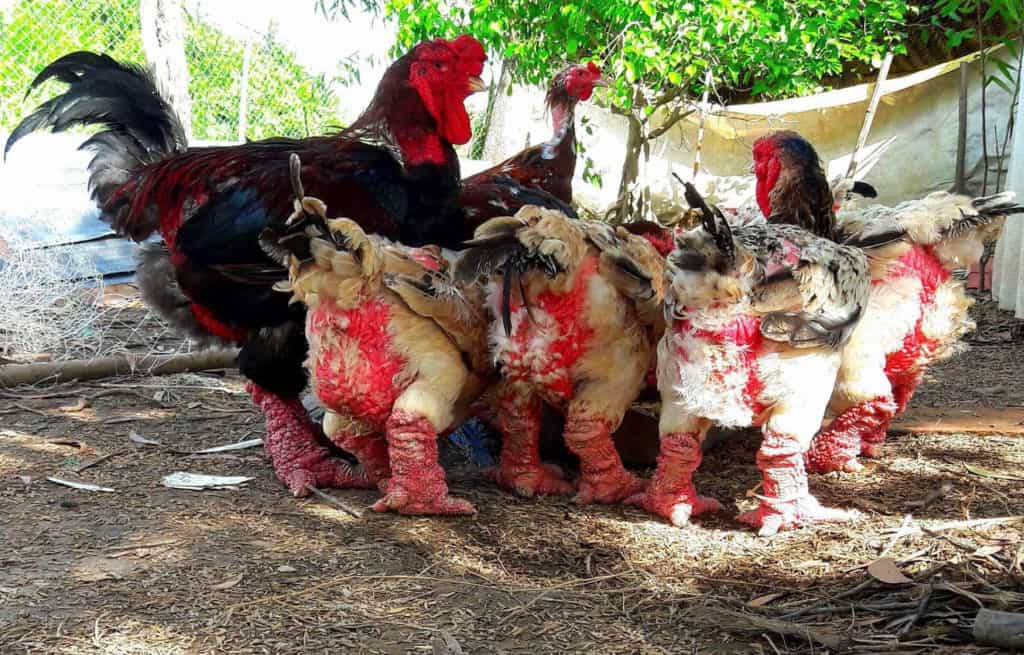 A farmer in Vietnam 200 hens and 50 roosters named Do Quoch Vuong, interviewed in 2017 after raising Dong Tao Chickens for 10 years, said that a lot of his chickens became ill when he first started, but that he learned along the way to cure them of diseases and treat them well.

He stated that because he now knows how to predict and ensure their health going forward, he is able to sell some of the chickens just after they are born. Do Quoch Vuong described the raising process as quite complicated, including knowing when to give vaccinations to newly hatched Dong Tao Chickens.

He said he releases them into the garden with other chickens when they are just over 2 pounds in weight, and at that point feeds them like regular chickens, and said he gives them a mixture of foods starting from when they are very small.

A farmer named Le Quang Thang, known as a Dong Tao Chicken billionaire has been developing a closed supply chain, production and distribution process to ensure sanitation and quality.

He supplies up to 2 tons of Dong Tao Chickens annually. He sends standing orders to restaurants in Hung Yen, including Van Hanh Restaurant, which has become known for its Dong Tao Chicken dishes.

Many visitors are said to arrive from England, Continental Europe, Japan and the US, to import Dong Tao Chickens for research or breeding and marketing.

The cost of breeding stock can average $4-5 per chicken. A couple of pounds of Dong Tao Chicken meat can fetch $17-19.

Dong Tao Chickens have enormous heads, legs, and feet, and are very colorful. Once bred for royalty, they are now in popular demand but short supply, and require much longer to raise than other chickens, and produce fewer eggs. But the meat is considered one of the tastiest in the world, and the demand is becoming international.