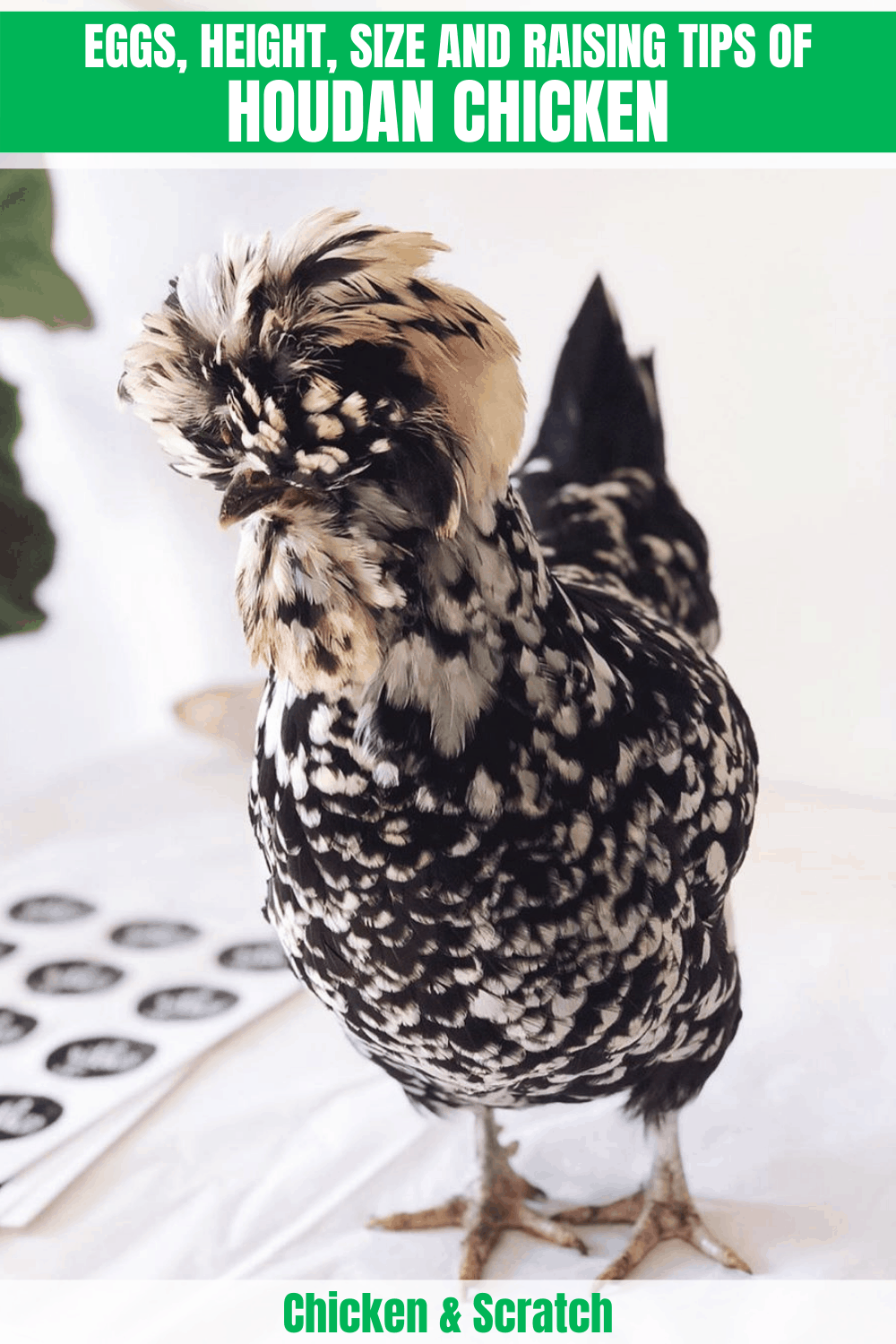 For chicken enthusiasts who are searching for a truly unique bird, the Houdan is an obvious choice. This French chicken has a distinctive appearance and is often used as a show bird. However, the Houdan is also a good egg layer, making it the perfect option for an addition to many different flocks.

Background and History of Houdan Chickens

At the time, there were many five-toed chickens, and it is thought that the breed may have its roots here, as the Houdan also has five toes, unlike most chicken breeds which have four toes.

It is thought that these five-toed chickens were eventually bred to other chickens, possibly including the Polish chicken, which has a crest quite similar to that of the Houdan, the Crevecoeur, and the Dorking. The Houdan received its name from a town just west of Paris. 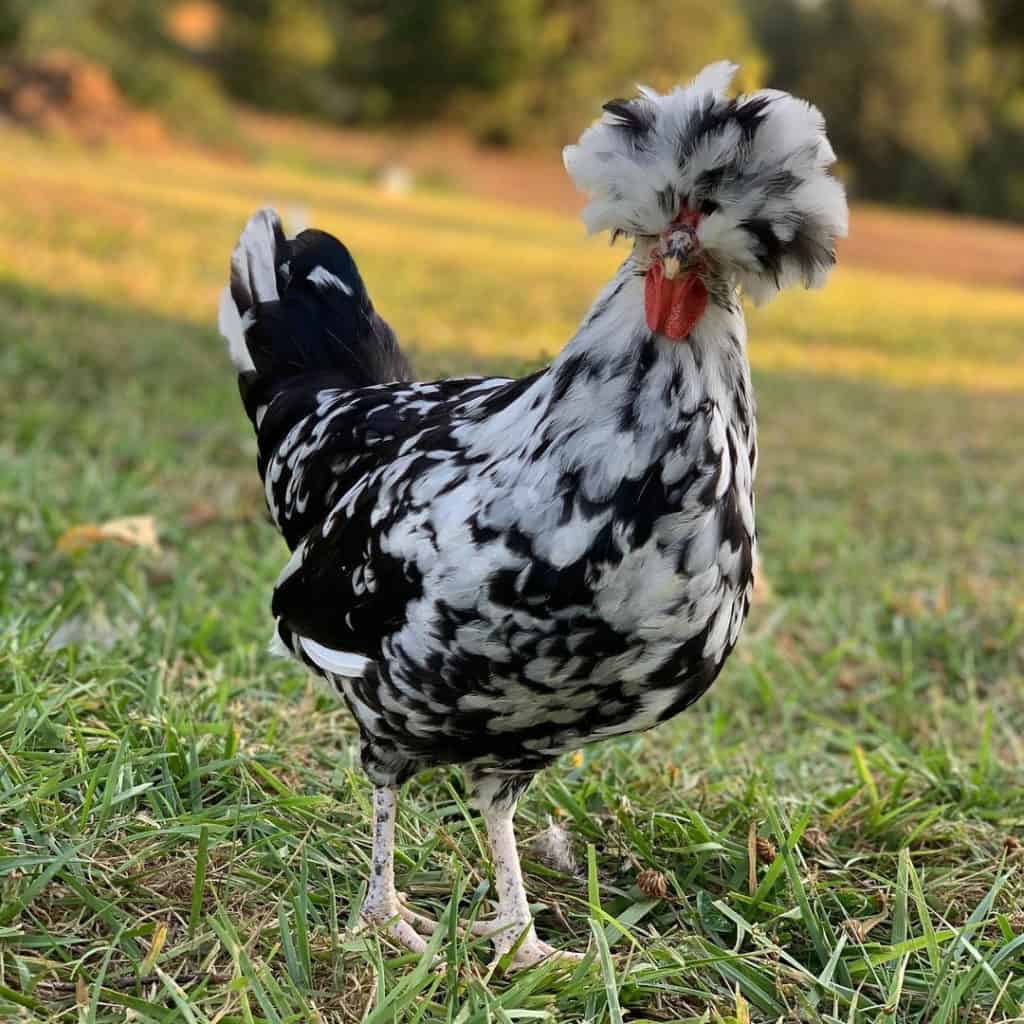 The Houdan gained more notoriety around 1850 when it was first imported to England. Fifteen years later, it was brought to North America. Mottled Houdans was first recognized by the American Poultry Association some years later, in 1874.

By then, they had been exhibited in the United States and breeders were working to create a white variety. The white Houdan was accepted into the American Poultry Association in 1914.

In the past, Houdan chickens were used as a profitable multi-purpose bird. Today, although they work well as both a meat and egg laying chicken, this chicken breed is largely used for showing. Many chicken enthusiasts keep them as ornamental birds or pets, but they are sometimes kept in barnyard or backyard flocks. 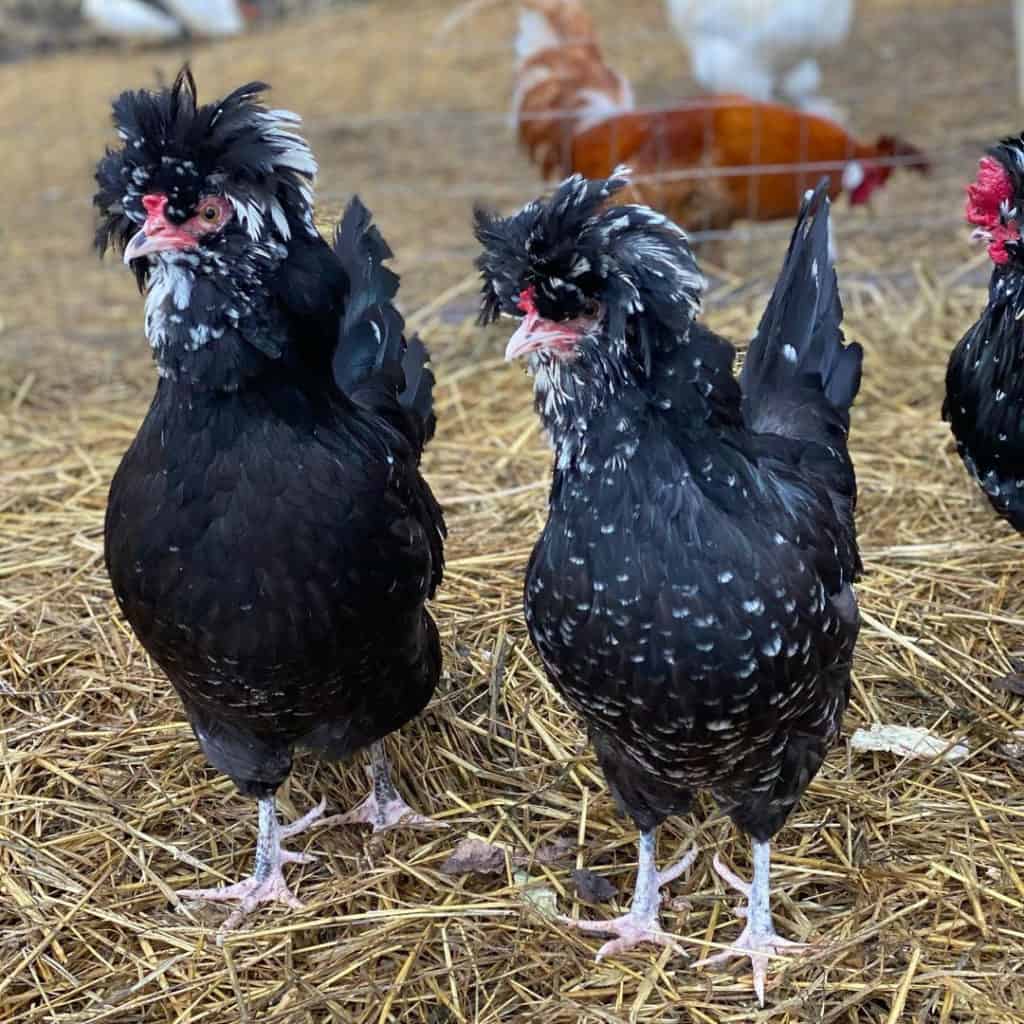 The Houdan chicken has one of the most beautiful and striking appearances of any chicken. Most commonly, the birds come in a mottled pattern, with both black and white feathers. A white variety is also recognized, and a black variety is available. In Europe, a cuckoo and pearled gray variety are also accepted.

The feathers lie flat and close to the body of the chicken, except at the head, where the bird displays a beard and crest. The birds also have tufts near the ears. The tails of the birds are relatively long and are held erect.

In the United States, only red combs that have a V-shape are considered acceptable. However, in most other countries, including their native France, the combs of the birds have a distinctive oak leaf or butterfly shape.

The legs of the birds are pale in color and are not feathered. Houdans of any color should always display the five toes that the breed is known for.

Despite their exotic look, the Houdan chicken is actually known as a very sweet and pleasant bird. They are considered to be easy to handle, which makes them a good option for beginner keepers or people with children or other backyard or barnyard animals.

The gentle, calm temperament of the Houdan chicken also makes them a good option for showing, and most keepers of the Houdan do just that. These birds are not easily flustered, which is a good trait for a noisy, disruptive show environment. They will also tolerate confinement, so they do not generally mind being confined to a cage during showtime.

Many chicken enthusiasts also consider the Houdan to be easy to care for. This is another reason why the Houdan chicken makes an excellent choice for chicken keepers who are not overly experienced. 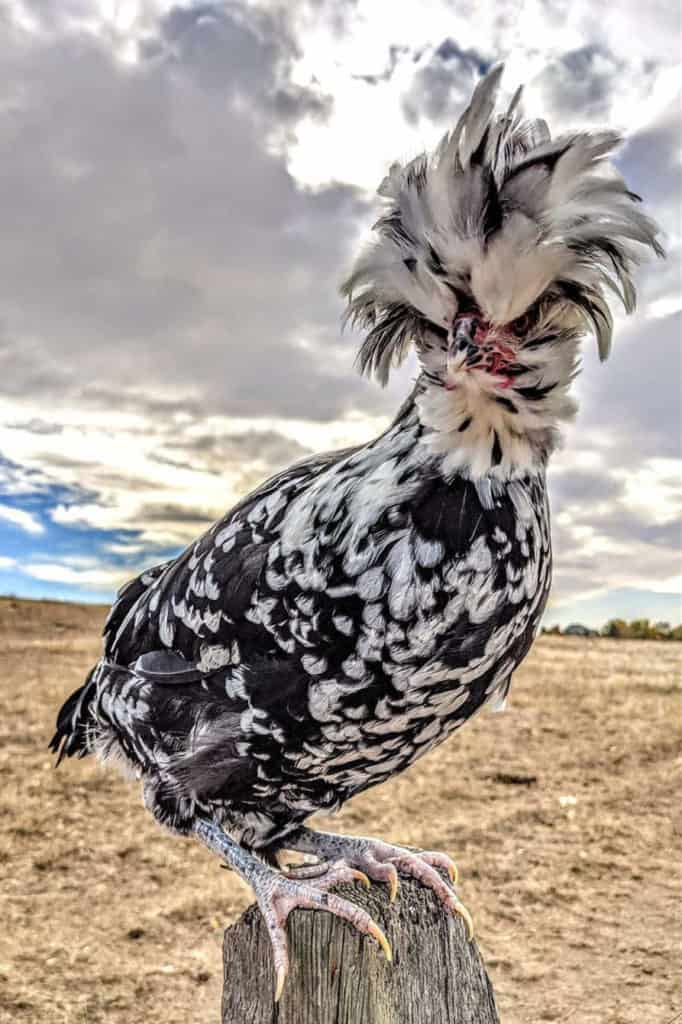 The Houdan chicken was most likely originally used as a dual purpose chicken. In fact, in France, it has received a certification for excellent taste in meat. However, these birds are also decent as egg layers. They lay about two eggs each week, although this can sometimes increase. Keepers of Houdans can expect to receive about 150 to 180 eggs each year. 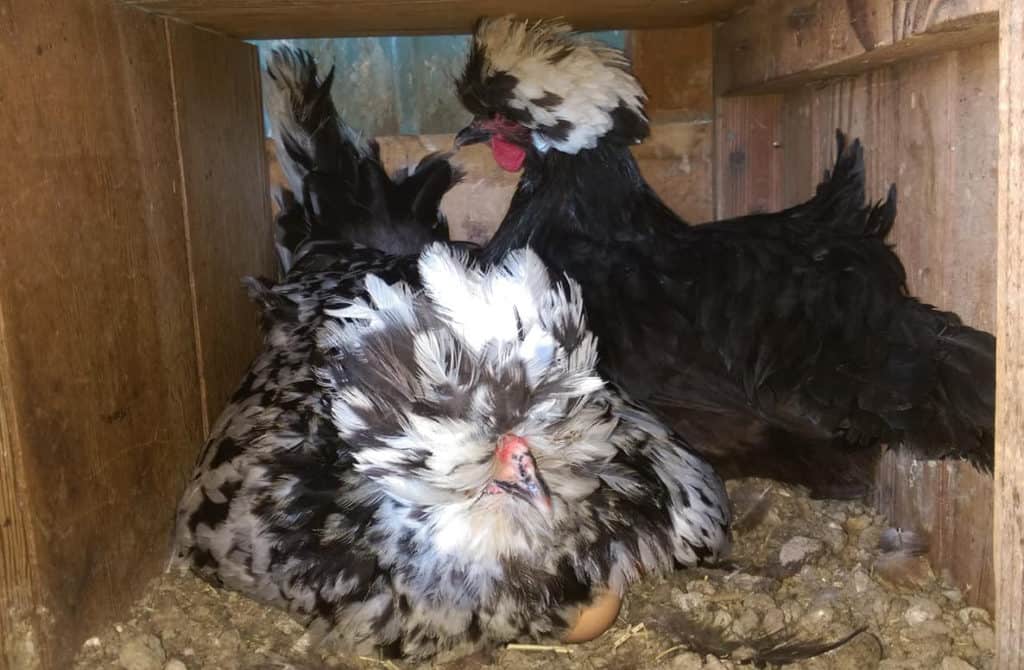 The eggs of the Houdan chicken are white or cream colored. They range from small to large in size, and this size may depend on a number of factors, including the size of the hen.

Houdan hens are considered to have strong brooding tendencies. They are very intent on incubating their eggs and enjoy sitting on the nest. This means that, if they wish, Houdan keepers can have a large number of Houdan chicks.

However, it is important to note that Houdan hens sometimes attempt to incubate a large group of eggs at a time, which can cause the eggs to crack. If chicks are desired, Houdan owners should ensure that the hen only sits on a small number of eggs. 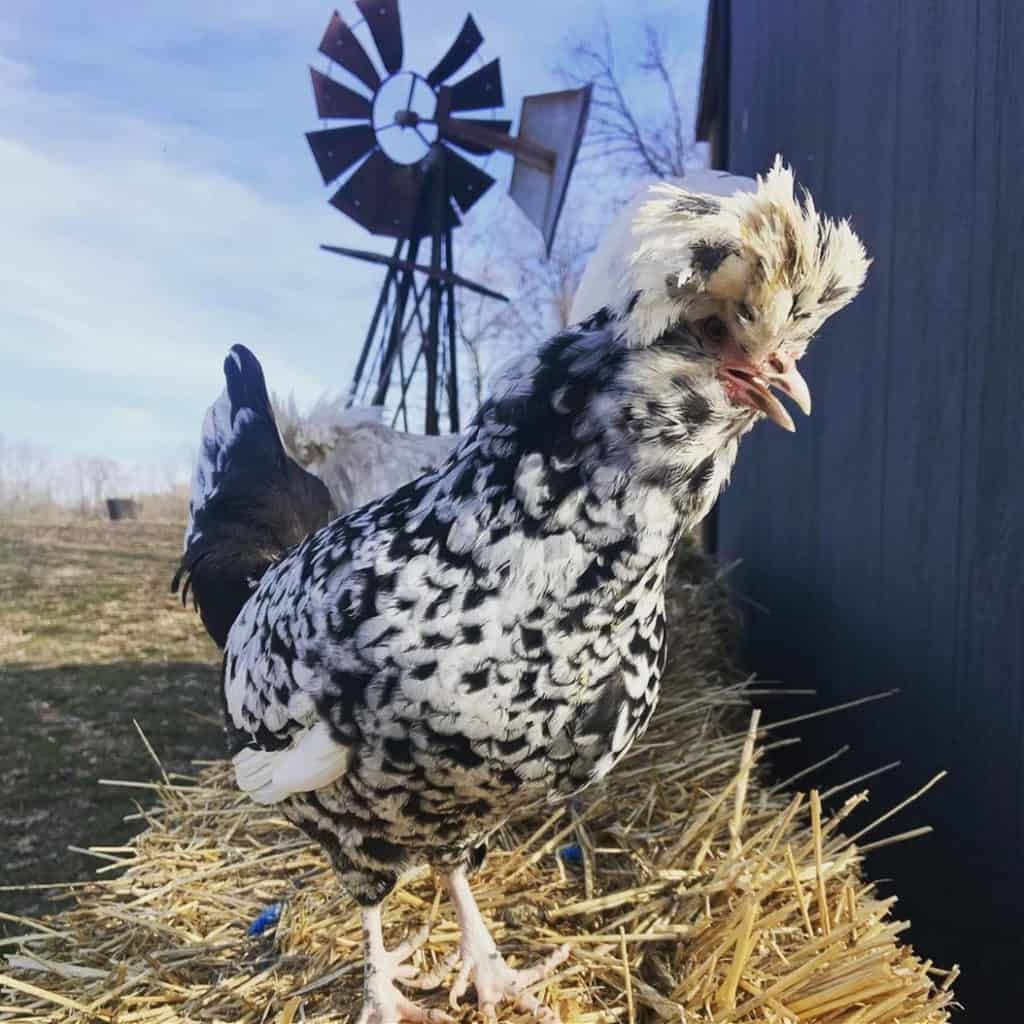 Houdan chickens are easy to raise. They do not require any specialized care and should instead largely be treated as keepers would treat any other chicken. In addition, these chickens do not encounter illnesses or diseases more than any other chicken types.

Chickens with crests, tufts, or beards may experience more of a mite problem than birds without these features, due to the fluffy nature of the feathers. In order to deter a mite problem in Houdans, chicken keepers can keep the coop or barnyard clean.

They can also change out hay, straw, or other bedding more frequently in order to keep down parasite problems. A repellent can also be sprayed on the birds, as long as it is natural and safe for the birds’ health.

Houdan chickens tolerate heat well and can be kept even in the warmest climates. Keepers simply need to ensure that the chickens have access to a plentiful water source and a good amount of shade for when they do become too warm.

Conversely, these chickens do not do well in colder weather, and should generally not be kept in areas that have harsh winters with freezing temperatures. 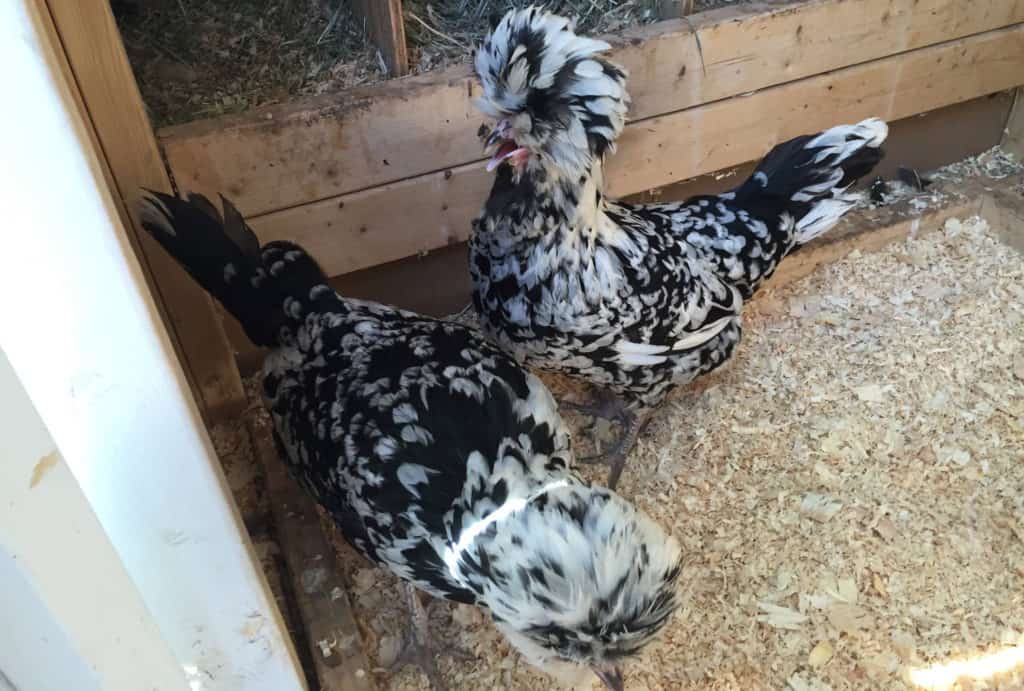 Raising Houdan chickens is relatively simple. They can be offered free range opportunities, which will allow them to forage and can help to introduce more vitamins and minerals into the chickens’ diets. However, these chickens also tolerate confinement well. They can be kept in a coop, as long as they are given an adequate amount of space.

Usually, chickens should be given at least two square feet of space each, but doubling this can make the chickens much more comfortable. Houdans can also be kept on a variety of surfaces including soil or grass.

Houdans are generally very agreeable birds. The roosters are also quite social, and because of this, they prefer to have a large flock of hens. 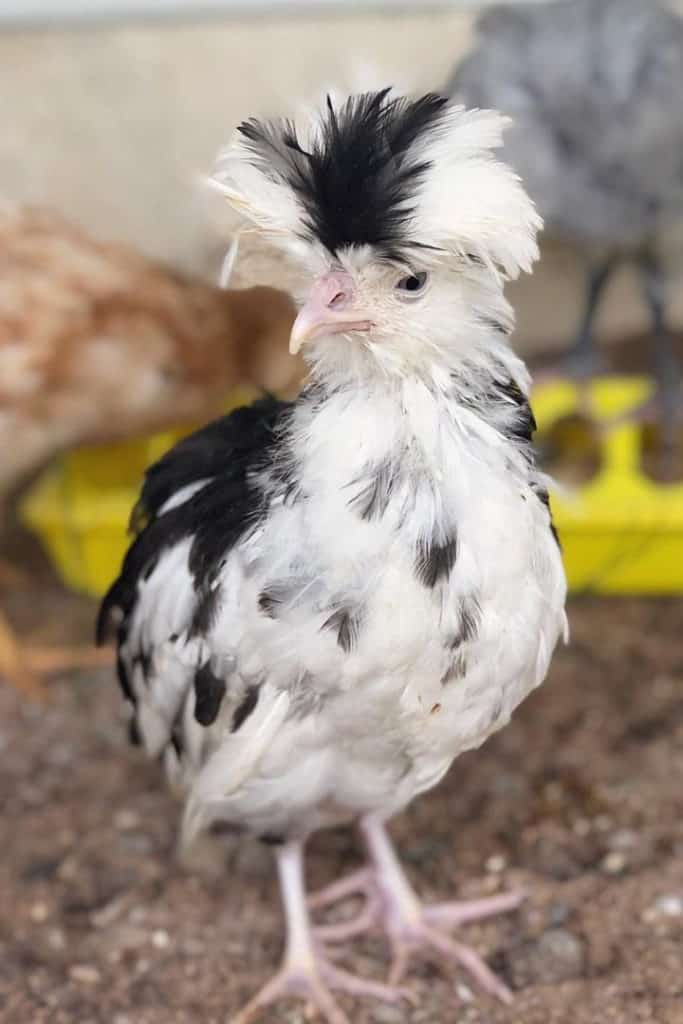 If a rooster is included in the flock, keepers should ensure that there is a decent number of hens for the roosters to socialize with so no hens are overly pestered. This can also help to ensure that keepers can expect a good number of chicks.

Houdan chickens are considered to be decent egg layers, but some keepers have reported that they are actually excellent egg layers. This may mark a difference in how keepers care for their hens. Hens that receive higher quality food, including vegetables that are rich in vitamins, usually produce more eggs.

The chickens’ diet should also include a good amount of protein. Offering a calcium supplement such as oyster shells can also help hens produce larger, more abundant eggs. In addition, water should always be available. Chickens drink water constantly, and even a short time without water can cause them to stop laying eggs for an extended period.

Houdans are an old breed that, for some time, has been considered more of an ornamental bird than anything else. However, these gentle, friendly, attractive chickens are also good at laying eggs. In addition, they are easy to care for. These attributes make the Houdan an excellent option for a variety of keepers and a great addition to many flocks. 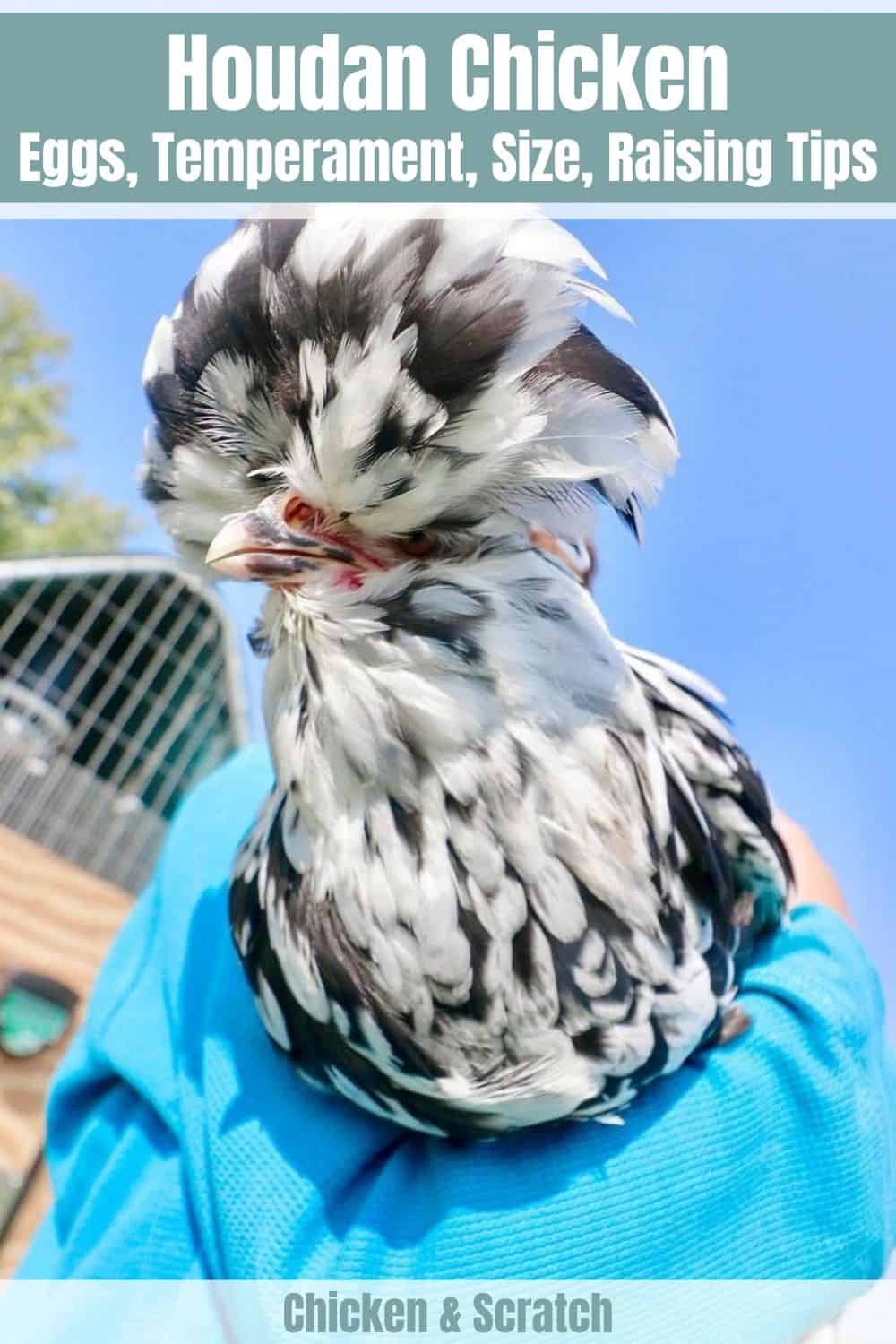