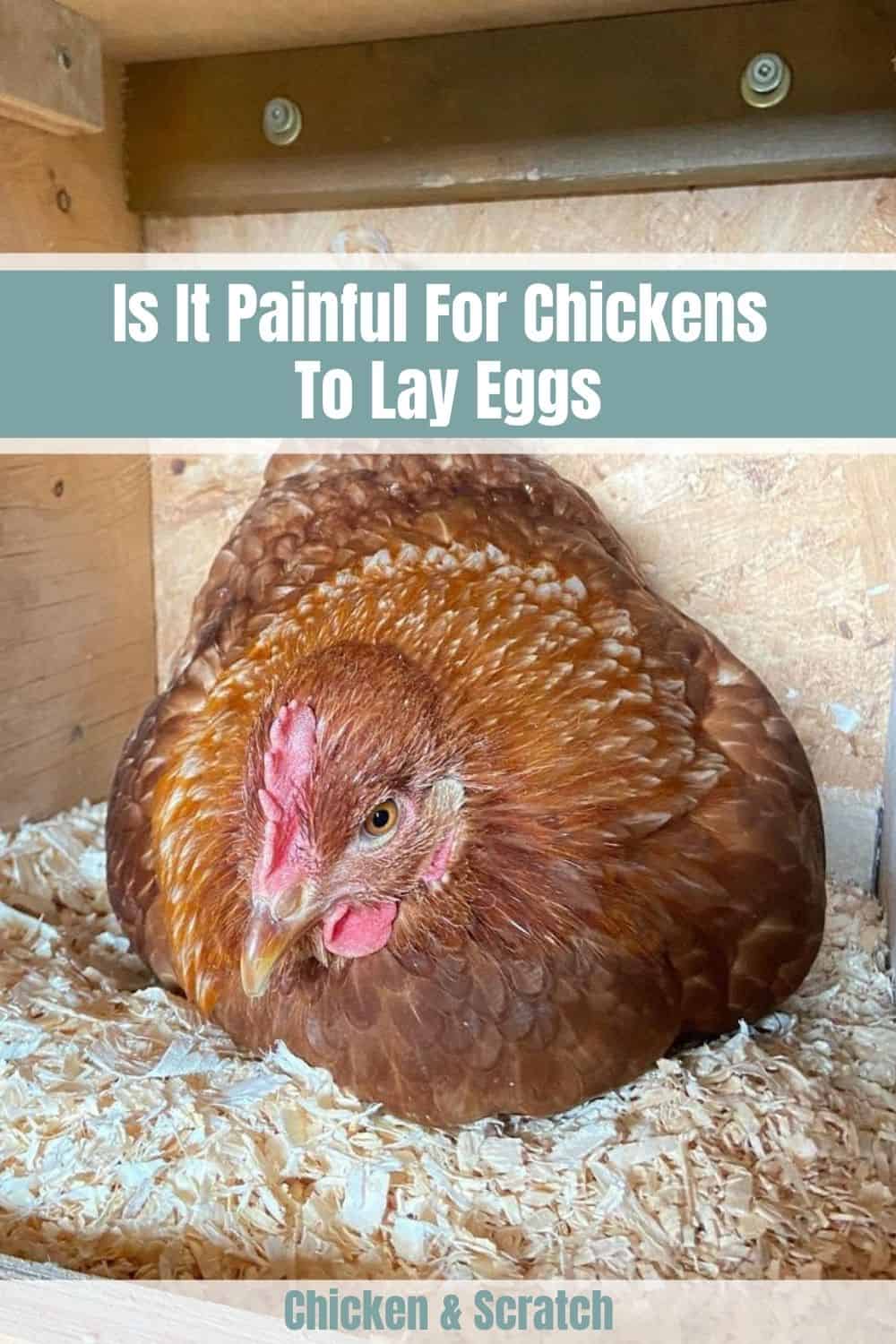 An average hen lays about 296 eggs in a year. As such, having a couple of hens can promise considerable profit. But as a responsible farmer, you also want to ensure that production does not lead to discomfort for your hens. So is it painful for chickens to lay eggs?

How a Chicken Forms and Lays Eggs

First, let’s talk about the process by which hens form and lay eggs. When a female chick is born, it carries thousands of chicken ova or immature yolks inside its ovary. Once it reaches 16 to 18 weeks, the egg formation and laying process will be triggered when light enters the hen’s eye. Whether it’s natural or artificial, the light will activate the hen’s pineal gland and cause it to release an egg from its ovary.

This egg, which is now a yolk, travels from the ovary to the infundibulum, which is the part where the hen’s oviduct begins. A hen typically takes half an hour to complete this process. From there, the yolk will go through various parts of the hen’s reproductive tract to facilitate egg formation.

Once the yolk reaches the oviduct, it will begin forming its egg white, starting with the vitelline membrane, which is a clear casing that protects the yolk. When it reaches the hen’s magnum, additional proteins called the albumen will be added to the egg white. The developing egg will then continue to travel down the oviduct, spinning until it forms the chalazae or the stringy parts of the egg. 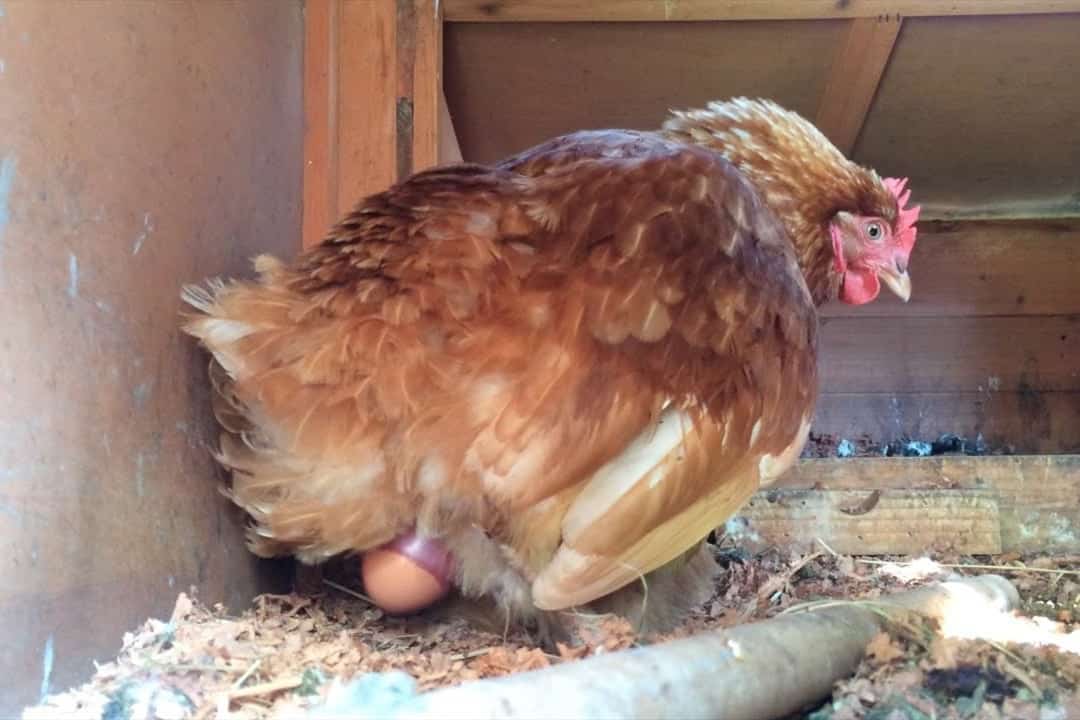 Next comes egg shape formation. This part happens in the isthmus, where more membranes are added to the albumen until it forms an oval. It usually takes an hour for this phase to be completed, after which the developing egg will travel down to the hen’s shell gland.

As its name denotes, the shell gland is where the hen creates the eggshell. The shell protects the yolk from harmful bacteria, which is why it’s the part that takes the longest to complete. Generally, it takes about 20 hours to form the shell and add eggshell color for the developing egg.

Once the egg is ready, the hen will push the egg from its shell gland into the cloaca. The cloaca is the space inside the vent, which is the posterior opening where hens defecate and lay eggs. A hen can lay only one egg per day.

To better visualize this whole process, watch this video:

Central to the process of hens laying eggs is the song that they sing when they do. While it can be argued whether it qualifies as a “song”, hens do make a very loud screeching noise as they lay eggs. This is called the “Egg Song”.

There are many possible explanations for why hens cackle when they are laying eggs, and these include:

In the wild, hens may wander off to lay eggs and cackling loudly is a good way of calling out to other chickens. Additionally, it can send a signal to other hens about where the nest is, as hens tend to build communal nests.

They’re trying to distract predators. Another potential explanation is that the Egg Song acts as a distraction from potential predators. While it is loud, the sound can fool other animals and even humans as to the exact location where it’s coming from.

This is important as hens can be vulnerable to predator attacks when laying eggs. According to a study that explored this specific topic across 11 organic or free-range farms, about 4% of hens in these farms died from being attacked by a predator.

They feel proud that they’re laying eggs. Additionally, hens may cackle to communicate their pride at having been able to lay eggs. While it is normal behavior for these animals, it is also a source of distinction that may accord a higher position in the pecking order for hens.

Lastly, hens may also sing the Egg Song to encourage roosters to mate with them. In many cases, a hen that has just laid an egg will mate with a rooster.

Because of the volume and intensity of the Egg Song, other people think that it’s a call for help. Is the song a way for hens to voice out their pain and discomfort while laying an egg? 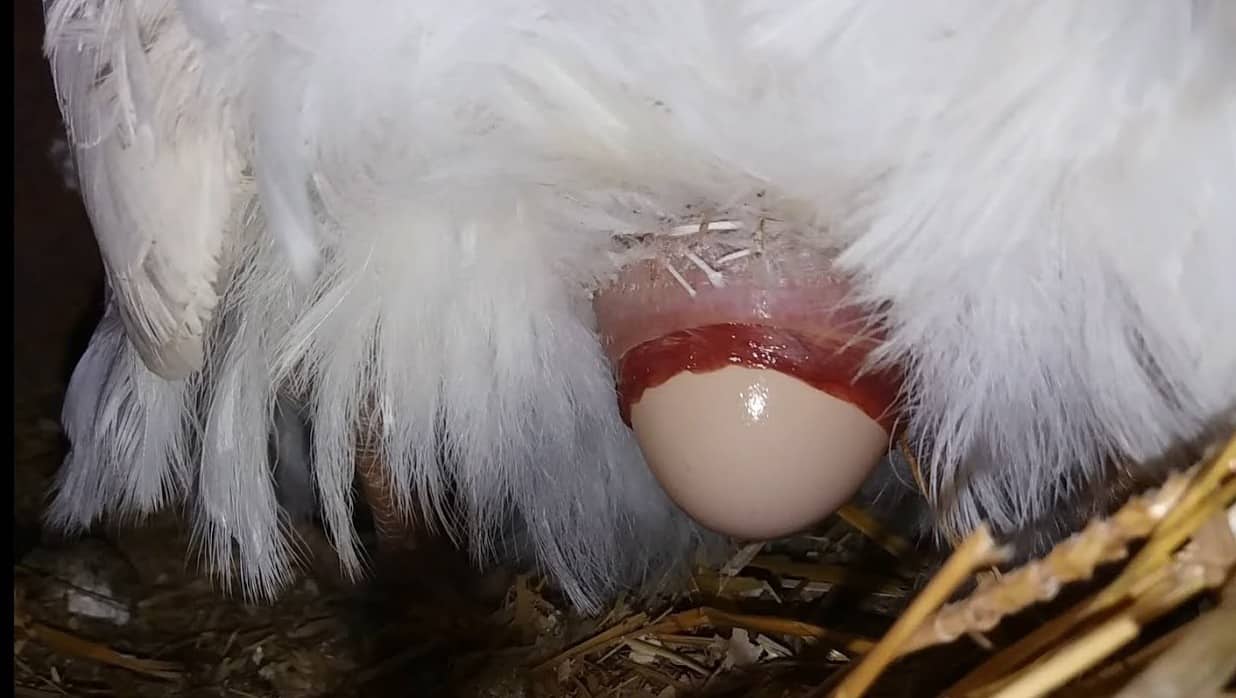 To answer this question, it is first necessary to establish whether chickens feel pain.

Like most living organisms, chickens have skin receptors that respond to various sensations – including pain. Across many studies, researchers have found that chickens display signs when they are in pain.

In one such study, for instance, it was found that chickens who have suffered damage to their beaks, a highly-sensitive organ that contains many nerve endings, tend to cover the end of their beaks under their wing or stop pecking and preening.

Additionally, another study found that hens, in particular, feel empathy. Signs that they are in distress include alertness, increased heart rates, and decreased eye temperatures.

When it comes to egg laying, the specific part that is involved is called the cloaca. This also has nerve endings, which can suggest that it will trigger sensations when it is used, like when a hen lays eggs.

As such, it is believed that egg laying can be painful to some chickens. In fact, there are two specific factors that can make the process distressful for certain hens. 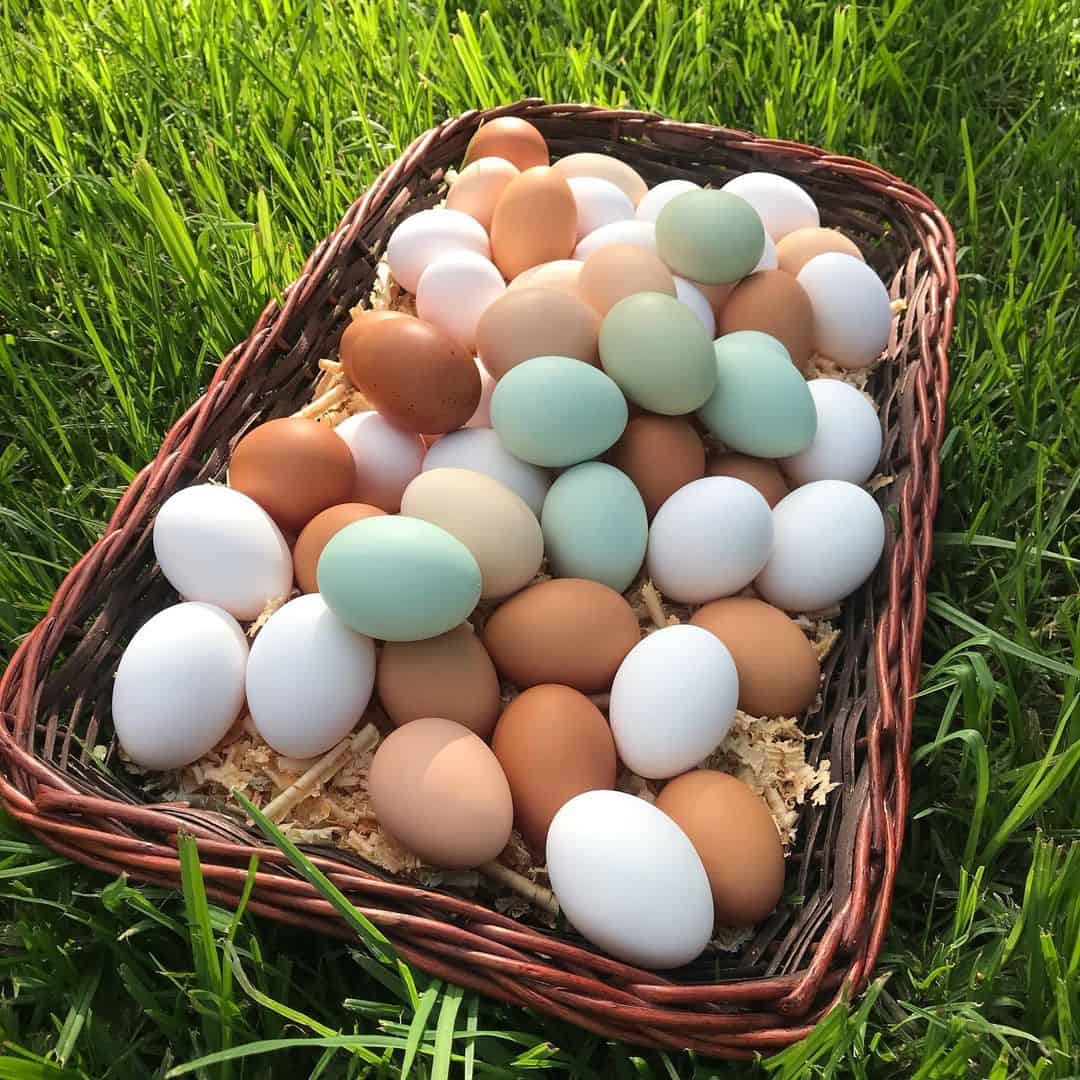 Eggs that are bigger than normal may cause pain to hens. In some cases, this happens when a hen lays an egg that has two yolks. With more than one yolk to develop, the normal egg formation process might also require more albumen or a bigger shell.

Younger hens are also thought to feel more pain when laying eggs, compared to older hens. They wheeze, gasp, and bleed. Fortunately, the process is believed to get better for these younger hens after the first time.

How to Care for Hens That Are Laying Eggs 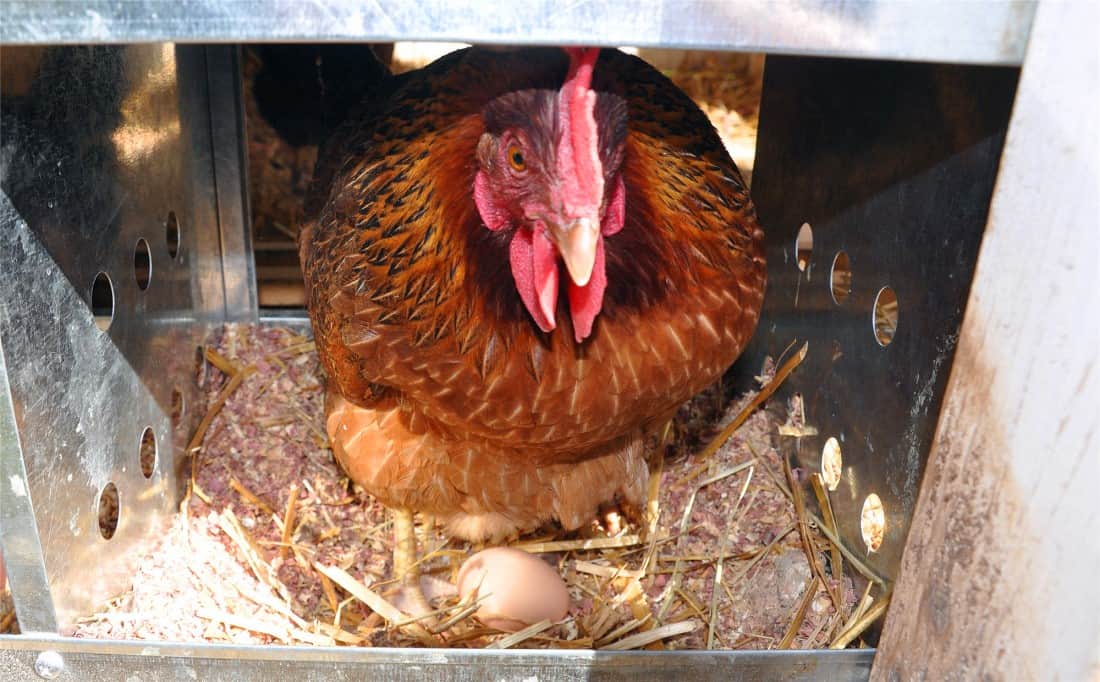 While chickens generally do not feel pain when laying eggs, it still pays to make sure that they are taken care of throughout their egg-laying life. Peak production time for a hen is within the first two years, and it can continue to lay eggs for as long as 10 years.

In this section, we outline some guidelines for properly caring for hens that are laying eggs.

Hens must have water and food every day. The eggs should be picked up at least twice a day. Additionally, they should be let out of their coop every morning and returned at dusk. Finally, their housing or pen must be kept clean and follow a weekly sanitation plan.

For optimal health, chickens need a balanced feed that contains minerals, protein, and vitamins. Laying hens, in particular, should also have crushed oyster shells and grit, especially when they are ready for laying.

In terms of the amount, it depends on the hen but typically, a hen that weighs about 6 pounds can consume about 3 pounds of feed every week. This may slowly decrease in the summer and increase during winter. 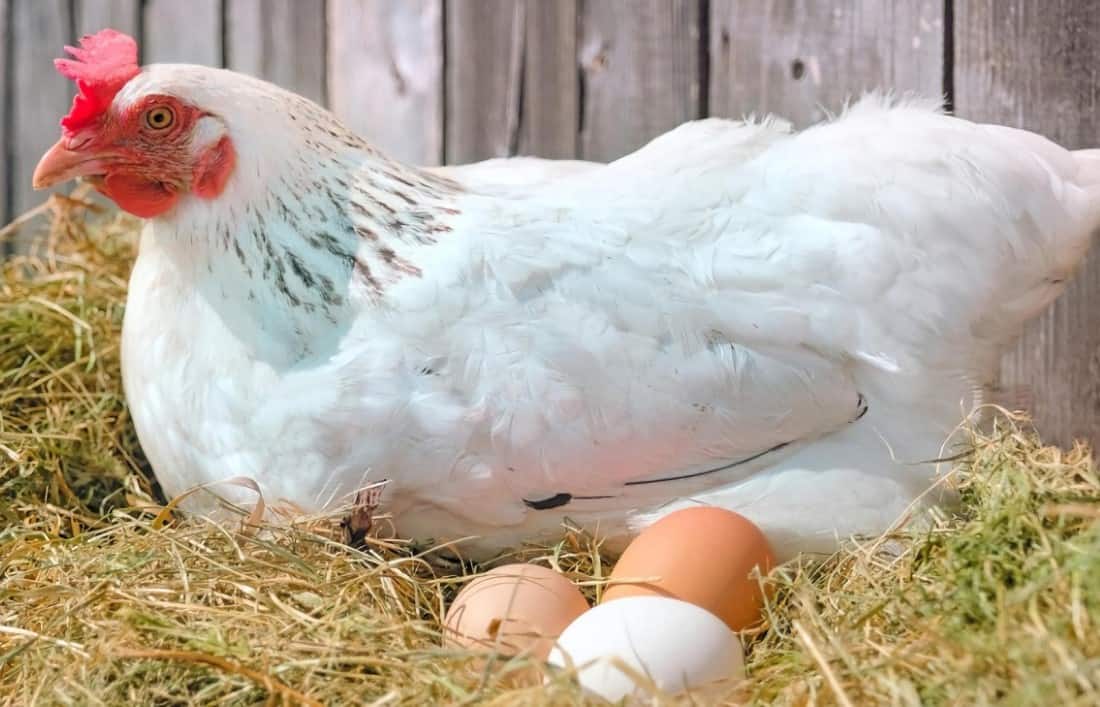 As they have jungle birds for ancestors, chickens need a place to roost in their coop. As such, their housing should have elevated areas where they can perch.

The coop should also have ventilation, heating, and insulation. Finally, it should be well-lit. Laying hens, in particular, needs to have access to light – whether natural or artificial – for at least 17 hours every day.

Cleaning out the coop should be done at least once a week. Pay particular attention to specific components such as feeders and waterers, as these can trap dirt and debris and potentially cause sickness to your hens.

Additionally, schedule an annual thorough sanitation procedure. Replace broken parts of the coop, and monitor your hens for optimal health.

What to Do If Your Hens Have Stopped Laying Eggs

There are many possible reasons why hens may stop laying eggs. The first is inadequate light. If the hen can’t have access to light for at least 17 hours, the process that controls egg formation will be negatively affected.

Also check if the coop conditions are causing stress to your hens. Common reasons for stress include overcrowding, noise, insufficient warmth or ventilation, and sickness.

Speaking of sickness, monitor your hens’ diet. They should be fed a steady stream of complete feeds to ensure they are in peak egg laying form.

In conclusion, if you’ve been wondering, “is it painful for chickens to lay eggs”, the short answer is no. This is generally true unless they are very young or they’re laying exceptionally large eggs. However, you can still make the process comfortable by making sure that they receive proper care.

1 thought on “Is It Painful For Chickens To Lay Eggs?”