Whether you are a beginner or a professional in chicken farming, you will probably find Old English Game an interesting breed. These independent, unique chickens can make great pets if treated properly.

They are one of the oldest chicken breeds that still exist, and their purpose has changed throughout history – while they were raised for fighting in the beginning, they are now mostly used for bird shows, and sometimes for eggs and meat.

Let’s learn more about their history, how to recognize them, how to take proper care of them, and how to make the Old English Game flock happy and healthy. 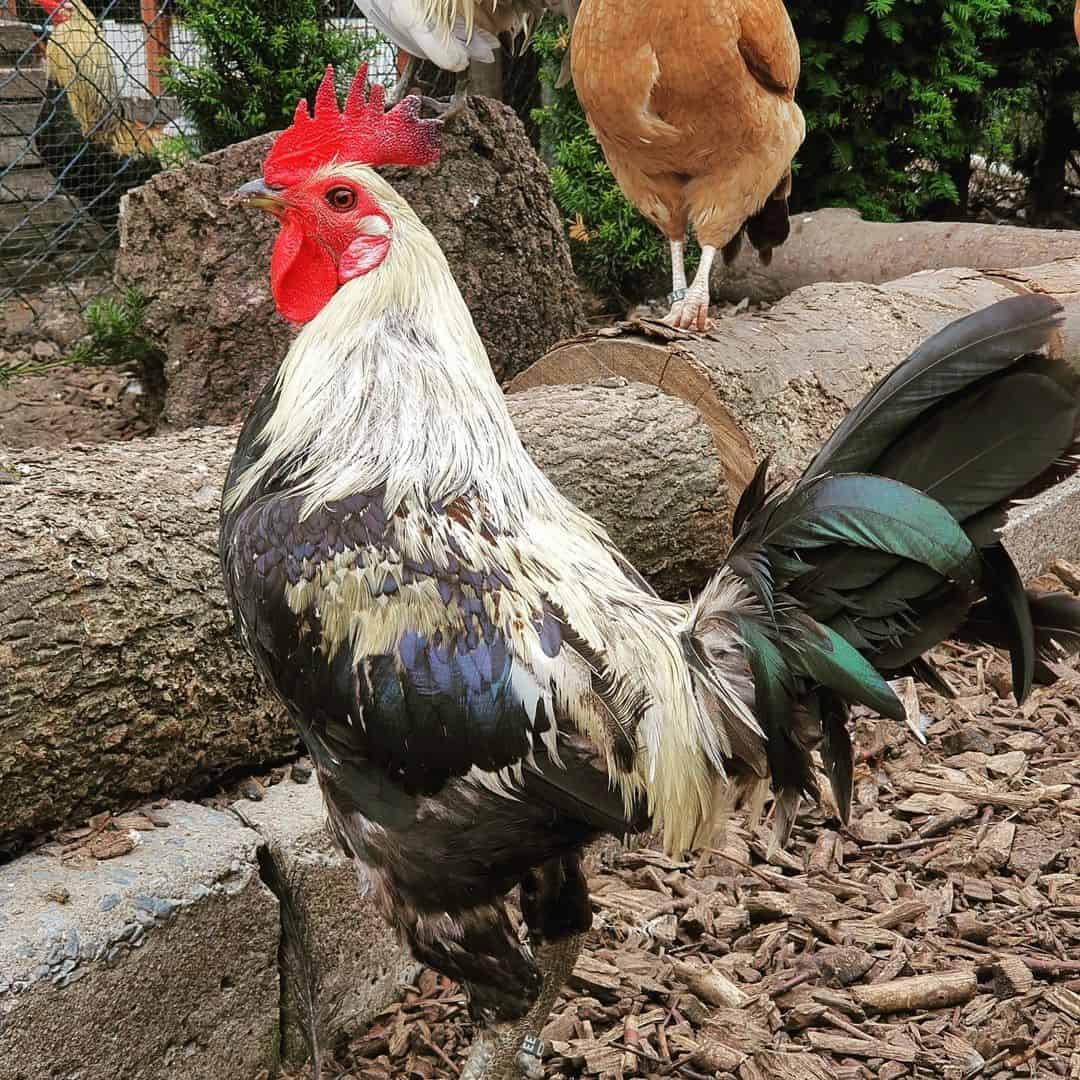 Old English Game is one of the oldest chicken strains. As the name says, it originated in Britain. It was brought there by Romans during the first century. Old English Game was primarily raised for cockfighting until that sport was banned during the 19th century.

Since then, it has been mostly used as a decorative bird. Since the beginning of the 20th century, there are two Old English Game chicken types – Carlisle and Oxford. The distinction happened because cockfighting was banned in England, and these birds were used for bird shows and exhibitions.

This ornamental bird is still used for shows, but it is slowly becoming endangered. However, it is still impressive that it continued to exist for more than two thousand years despite losing its primary purpose. Nowadays, it’s considered exotic because of its beautiful appearance, and many poultry-lovers enjoy having them in their backyards. 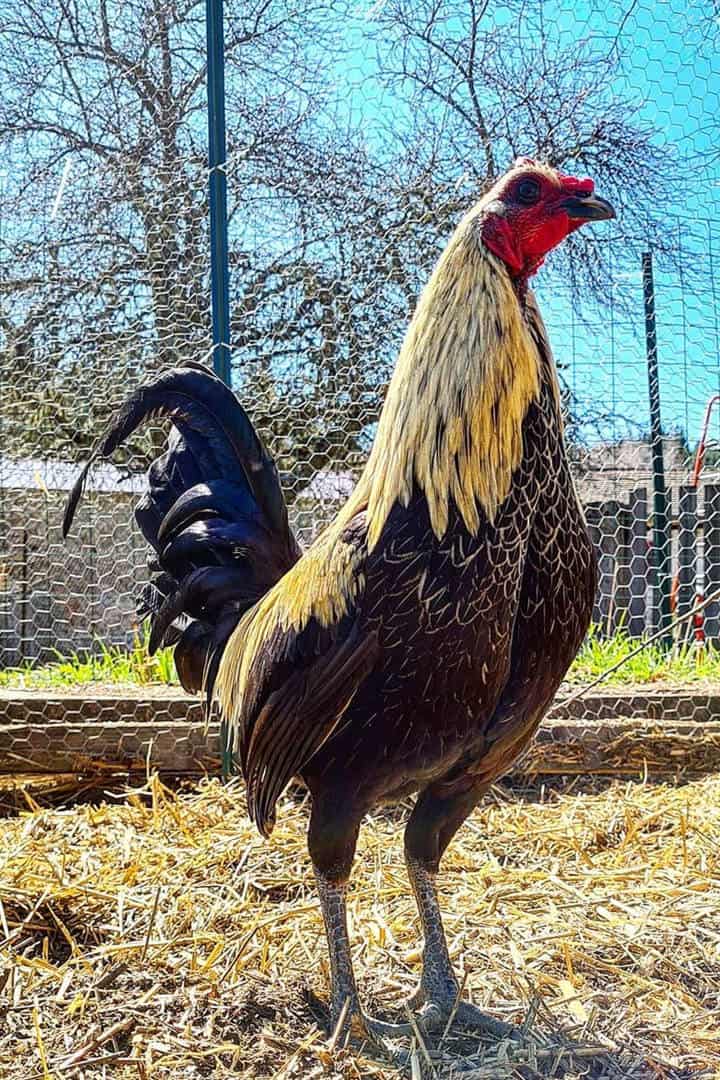 Old English Game chicken has a fairly distinctive appearance. As mentioned, they were bred for fighting, and the features that made them good fighters back then are still present. They are usually very colorful. Males can weigh as much as 3 kgs, while females can weigh up to around 2 kgs.

Carlisle chicken has a broad chest, while Oxford one is more slender. What’s common to both of these breeds is their very strong legs. They are muscular and their skin color is white. What is especially distinctive is their feathers – they are tough and glossy.

These birds can fly for a longer time than common chickens, so it’s a good idea to make a higher fence when you want to take care of them. Their wattles and comb are red and small, which is a leftover characteristic from their fighting times – they are more difficult to target.

They have long, curved, tough nails. Their beaks are also very strong and curved. They usually have their chest puffed, so they look stronger and more powerful. As mentioned, they come in various color combinations, the most common ones being black with red, blue, or grey, and brown with red or black.

Even though cockfighting has not been practiced for decades, the Old English Game has the personality and temperament bred for fighting. First of all, they are very loud, so if you have neighbors that live close, avoid having these chickens if you can.

Next, they are still aggressive – roosters cannot be kept together as they will become territorial and fight one another, more often than not to death. Hens are very protective mothers and they will sometimes groom chickens that are not their own.

Old English Game does not like to be confided – make sure they have enough space in the coop and that you are letting them roam around every day. Because of this characteristic, they make a great free-range chicken.

They are confident and kind of arrogant. You should not expect this bird to be close to a human being or different breeds of chicken. If you want to have them along with some other breed, make sure that you introduce the other breed while the chickens are still babies.

If you are a newbie to chicken farming, this bird is probably not for you. Due to their aggressive temperament, they are not exactly easy to maintain. As mentioned, you should be careful of their surroundings – their personality and the ability to fly well can help them escape rather easily. 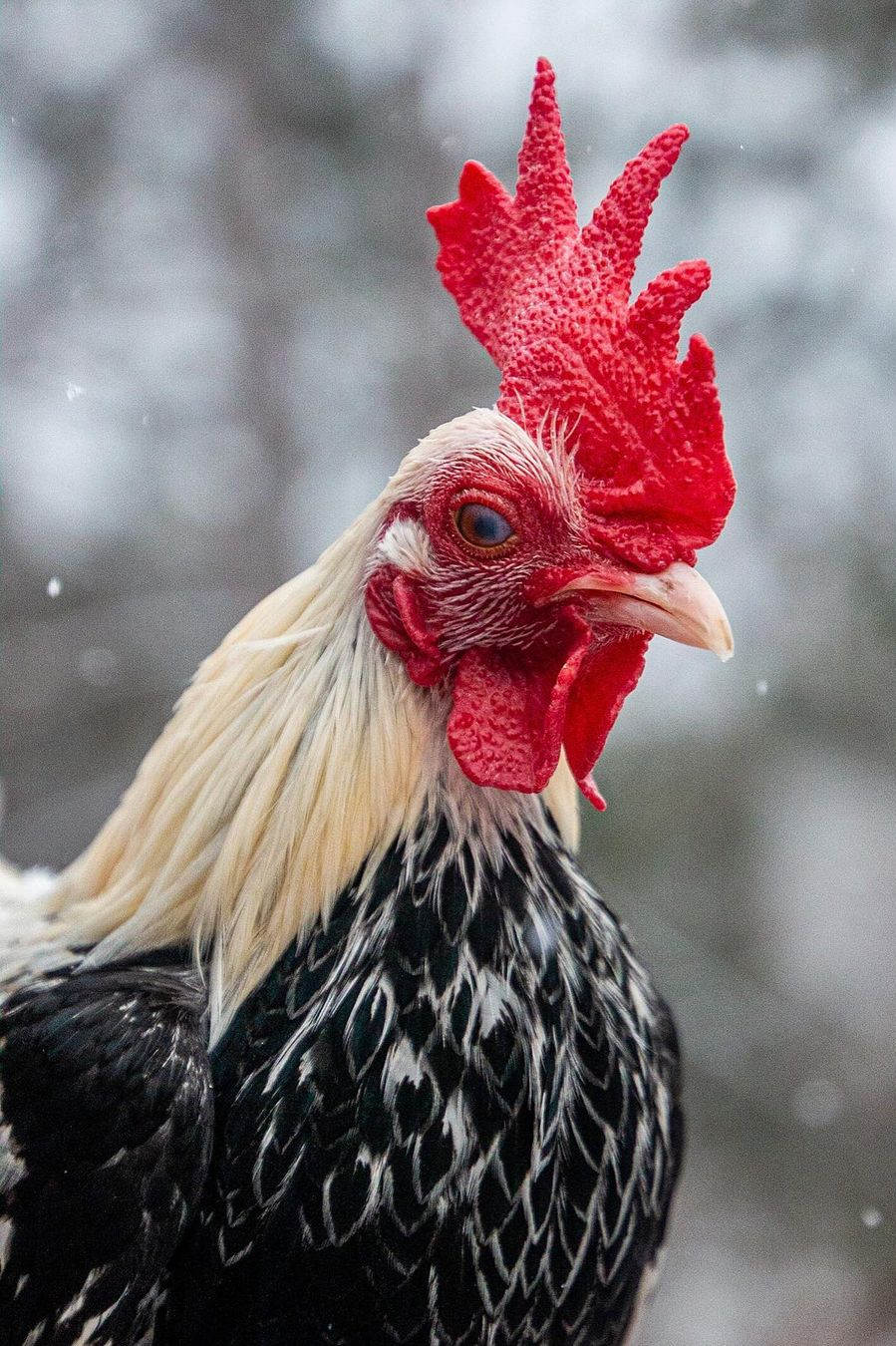 Old English Game hens are usually not kept solely for their egg production as it is not on the high end. They usually produce 100 to 150 eggs per year, which comes to up to three eggs per week in their most productive days, which is not a lot.

Their eggs are white and medium-sized. When it comes to meat, it doesn’t taste much different from regular chickens’ meat. They are muscly so they are good for meat production. However, as they are expensive and difficult to maintain, you probably don’t want to keep them only for meat either. 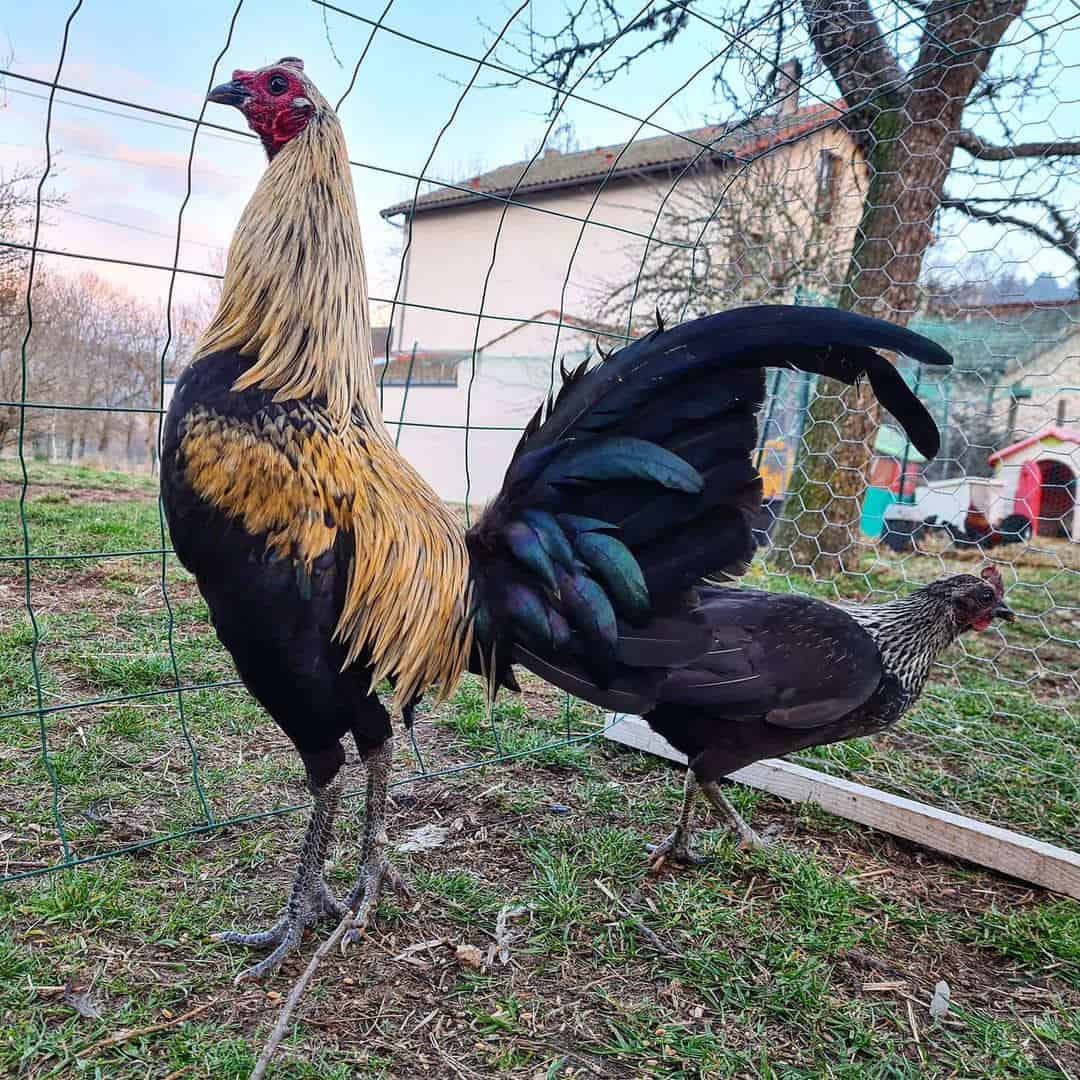 There are no specific health problems occurring in this breed. They actually have one of the largest life expectancies among chickens – they can live up to 15 years! That being said, they still need proper care and maintenance, just like any other breed.

First and foremost, you should make sure that they have enough space. They are territorial, so leaving them with enough space is required so they don’t start fighting. Next, never put more than one rooster in a flock. One rooster will take care of around ten hens, but they would not get along with other male chickens.

You should feed them properly. You can either give them commercial food or make the food yourself – either way. Their diet should be healthy and nutritious. They should also have fresh water available at all times.

Finally, regularly check your birds for any signs or symptoms of a disease. They are quite active so noticing changes in temperament shouldn’t be a problem. If you see that your Old English Game chickens are getting tired or quieter, you should have a vet examine them right away to make sure that they are healthy. 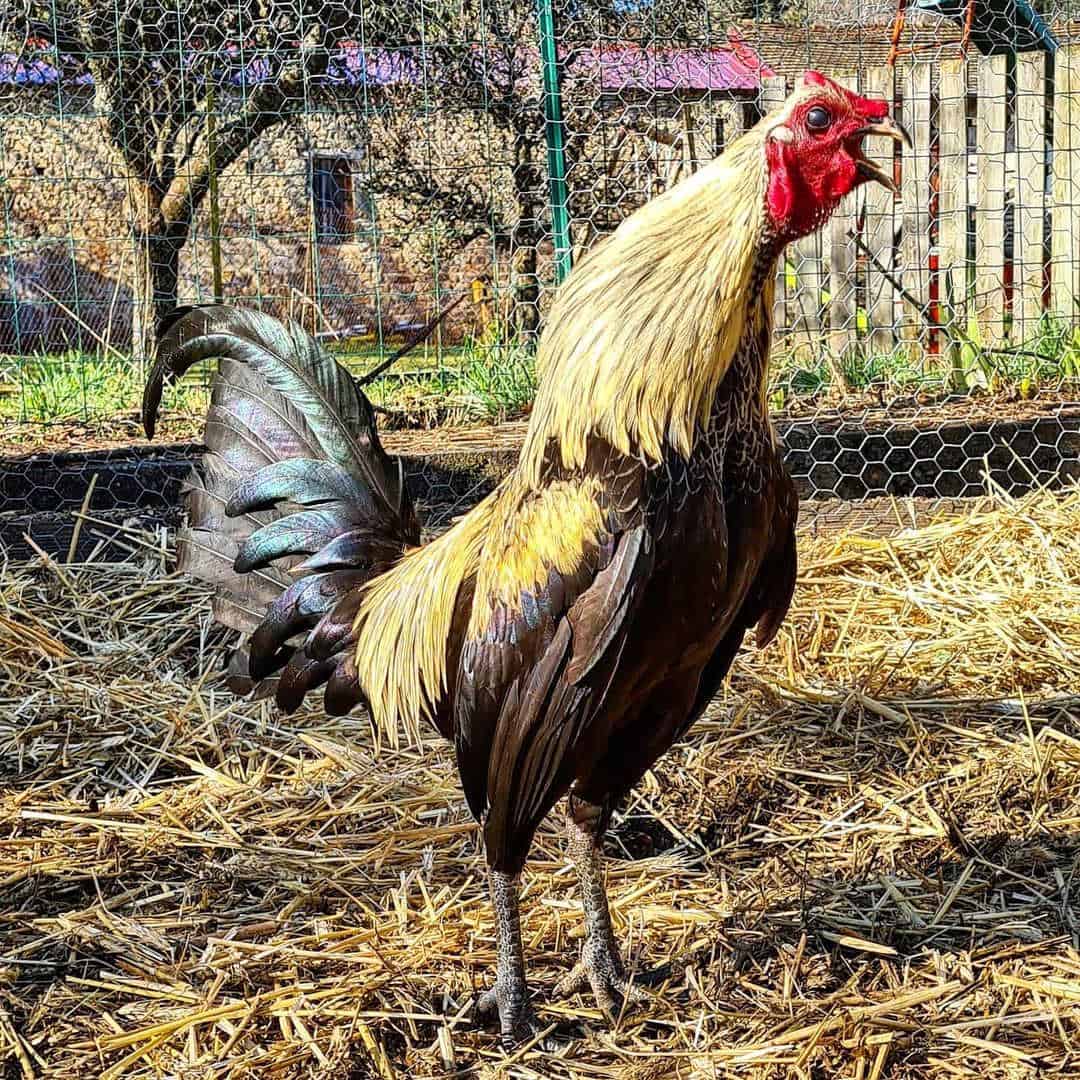 Apart from the obvious – feeding them, having good ventilation and hygiene in a coop, and providing them with regular vet check-ups, try to implement the following tips for the best care of this beautiful breed.

1. Provide Them With Enough Space

Make sure that each of your Old English chickens has at least 6 – 7 ft of space in their coop. Having enough space will prevent them from becoming aggressive towards one another and you will therefore ensure a happy flock.

2. Don’t Put More Than One Rooster In A Flock

Old English Games do not like to be in one place for a long time. If you do not have a backyard, it’s probably best not to raise these chickens. If you do, you should let them move around freely every day. They are adaptable to different weather but try not to let them out in extreme weather conditions.

Old English Game chickens are a great choice for experienced, passionate bird farmers. They are beautiful and come in many different colors. They are usually not a good option if you want to raise them only for eggs or meat – they do not produce many eggs and their meat is not special in taste.

They are a good choice for bird shows and exhibitions. Old English Game is an active chicken breed – they are noisy and quite temperamental. Although this breed of chickens is not raised for fighting anymore, their physical and temperamental characteristics have not changed much.

Depending on where you live, it may be difficult to find them for sale, and when you do, they can get expensive. In terms of proper care, you should do the same as any other chicken breed – feed them high-quality food, provide fresh water regularly, ventilate the coop properly, and follow their behavior for any signs of disease.

Apart from that, they need more space than common chickens, and they are good foragers, so you should let them out as much as possible. All in all, this is a special bird that would make your farm more lively and fun.