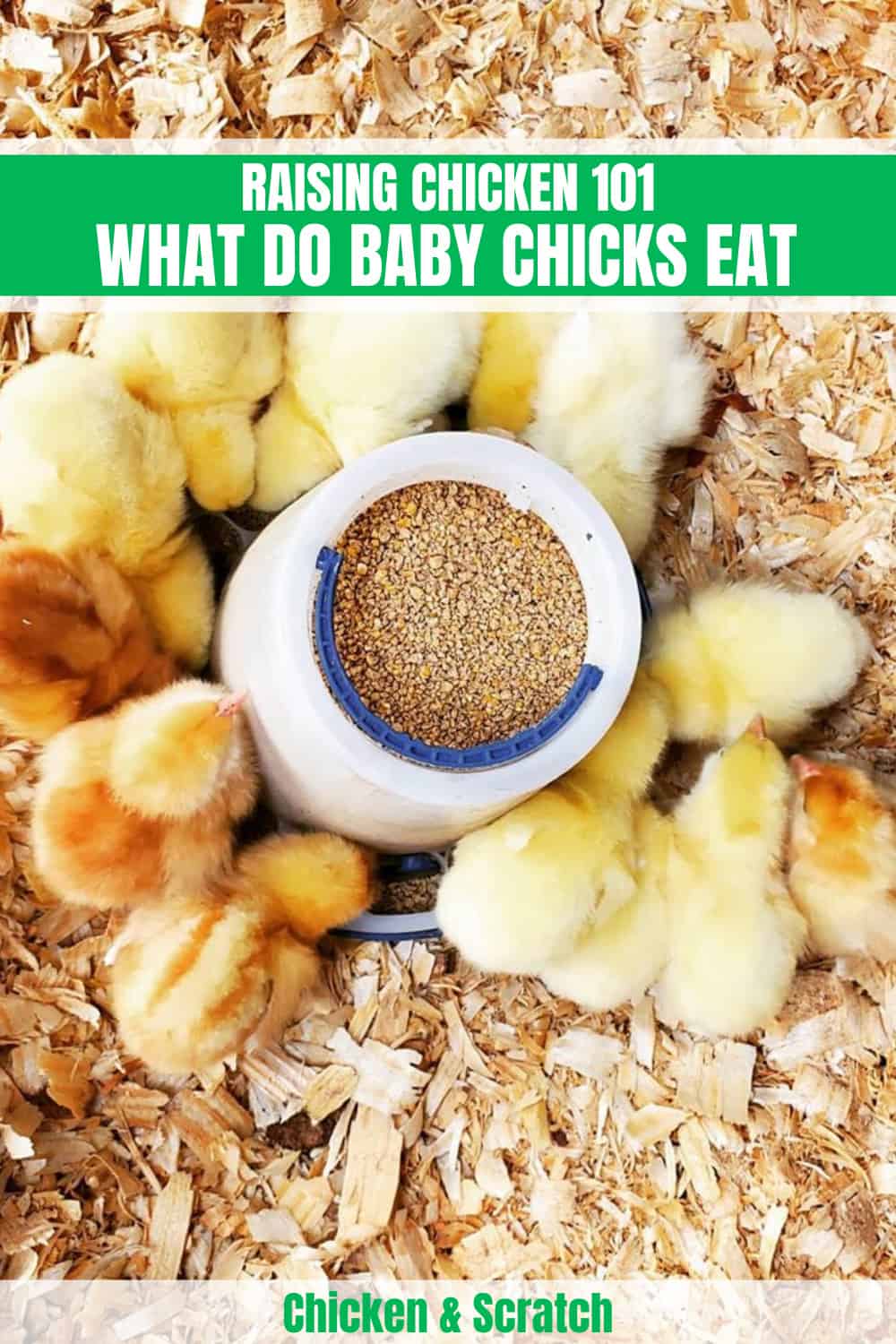 Raising chickens from hatchlings to adult hens provides numerous benefits; chickens provide pest-control and weed-control, offer a means for easily disposing of kitchen scraps, produce natural fertilizer that is great for gardens and flowerbeds, and, of course, can offer a ready supply of fresh, tasty eggs and nutritious, all-natural meat.

But to get those benefits, you need to start them off the right way with the proper diet that they need as chicks.

Chicks grow rapidly in their first few weeks and so require correctly formulated food to ensure healthy development. So what do baby chicks eat? And why is the right diet important for them? These guidelines can help make sure that you are feeding them what they need when they need it.

What do chicks eat when they first come out of their shells? The answer might surprise you: nothing. For the first 48 hours after they hatch, baby chickens require no food or water. They are still being sustained by the nutrients from the egg yolk, which their body has absorbed and is still processing up until they break out of the shell.

After the chick has hatched, it should be allowed to rest and dry out in the incubator for six to 12 hours before being moved into the brooder, where food and drink are first introduced. 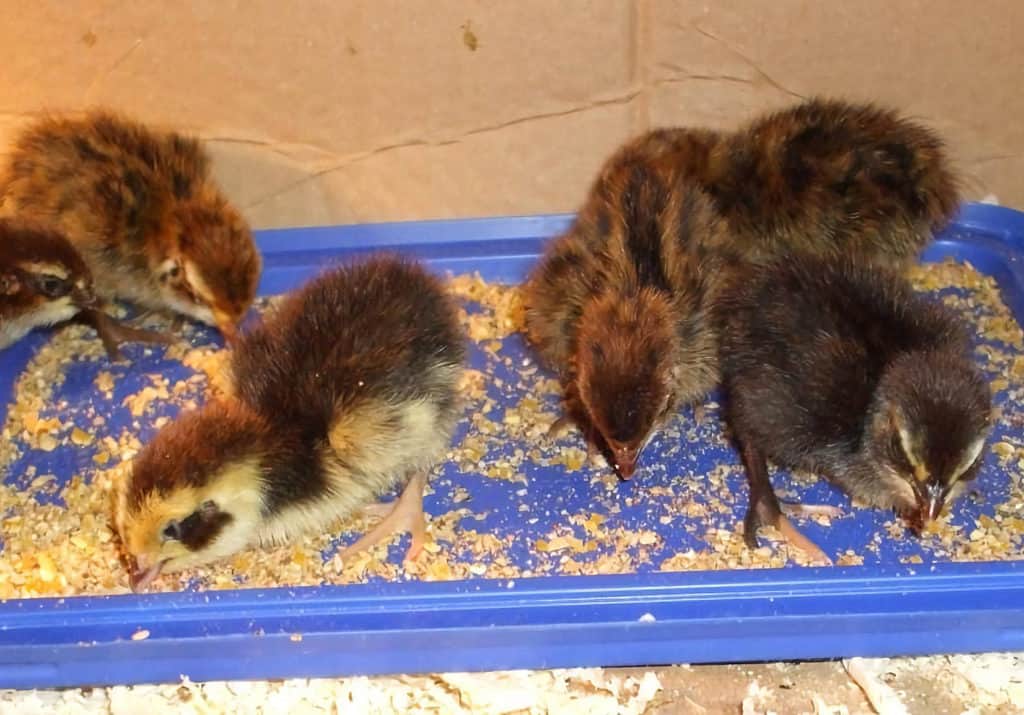 Baby chicks should not be fed adult chicken food: adult food lacks sufficient protein to help the chicks grow and remain healthy in their critical, vulnerable early weeks. Adult food is also too high in calcium for baby chicks; consuming too much calcium can lead to serious medical complications in young chickens, including an untreatable and potentially fatal form of kidney damage.

Baby chicks should be started on what is known as “starter feed” or, sometimes, “chick crumb”.

This commercially available chicken feed is designed to balance precisely the nutrients that baby chicks require, including an optimal range of between 15% and 20% protein, as well as amino acids for development, prebiotics and probiotics for immune health, and vitamins and minerals for bone health.

The best brands of starter feed are organic and non-GMO, containing only natural ingredients and no artificial fillers, preservatives, or chemicals. Most are available from a local feed or farm store, or they can be ordered online from specialty retailers.

Ideally, the starter feed that you use for your baby chicks should contain only unprocessed whole grains. Avoid the products that are filled out with soy and corn, which can provide a great deal of starch but very little nutritional benefit to your chicks.

You might be tempted to try making your own starter feed at home, but the risks of doing this are high. Baby chicks require a very precisely balanced diet to ensure their proper development, and their young digestive systems are not tolerant of many deviations from that diet.

If you mix the feed incorrectly, you could seriously harm your chick or cause long-term developmental damage. Malnourished baby chicks seldom grow into productive egg-layers or bulk up enough to be suitable as meat sources.

First Days in the Brooder 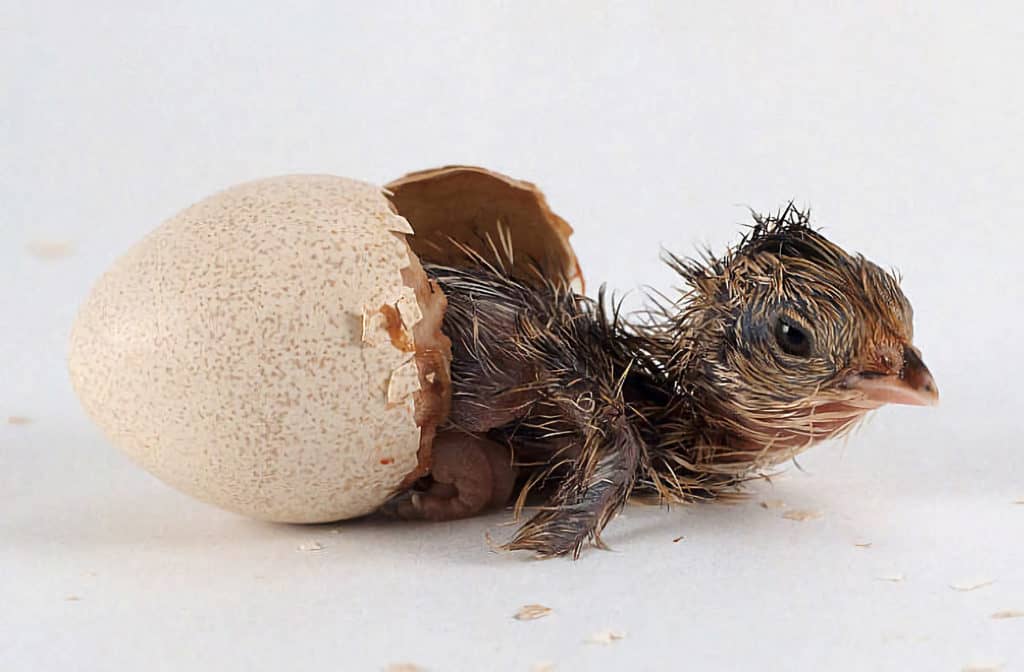 When you move the baby chicks into the brooder, you should already have a container with fresh, clean water for them. In some cases, sugar, vitamins, or mineral supplements might be added to the chick’s water for the first day or two.

Use a container that cannot be knocked over and has an opening designed to prevent waste from getting in and contaminating the water supply, and that will keep chicks from falling in and drowning. Make sure that it stays filled at all times and that the water remains clean.

Both chicks and adult chickens will drink twice as much water as the amount of food that they eat, so having a ready water source is essential.

Water should be at room temperature (so do not place it under heat lamps in the brooder) and should be supplied at a rate of two quarts per every 10 chicks, separated into containers no larger than one quart each. On a daily basis, empty, wash, and refill the water containers.

Towards the end of their first day in the brooder, or early on the second day, sprinkle some grains of feed into the brooder. Some chicks may not show interest at first—baby chicks spend most of their first few days sleeping and building up energy after the exhausting process of breaking out of their shells.

Eventually, however, they will become curious about the sound of the feed being dropped in and will investigate it.

Once they have taken to the feed—usually by their third day in the brooder—set out low-lying or trough feeders for easy access (clean egg cartons, cut in two, work well), providing four linear inches of space in the chicken feeder per baby chick.

Do not place them under the heat lamps in the brooder. Empty, clean, and refill the feeder daily, and keep a close eye on it to make sure that it stays supplied and does not become contaminated by waste or water. As the chicks grow, raise the level of the feeders so they are even with the bird’s backs. 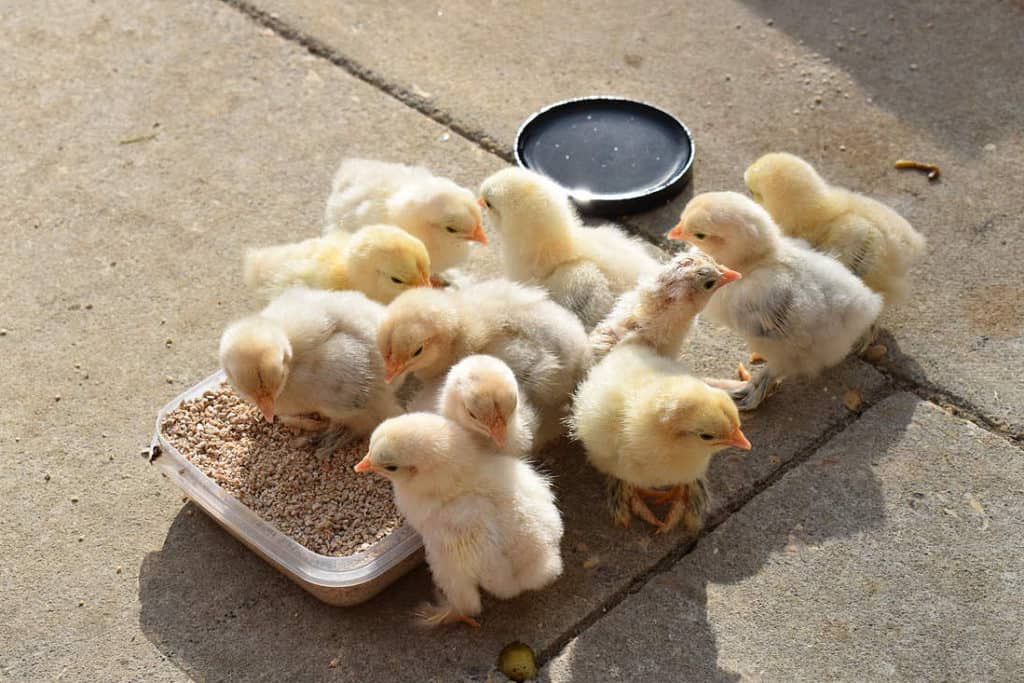 Avoid giving baby chicks any special treats in their first two weeks in the brooder. It is essential during this period that they mainly eat the nutritionally balanced starter feed. Introducing treats too early will make them less likely to desire the starter feed and may even confuse them about what the taste and smell of food should be.

If you do introduce treats, remember that the baby chick’s digestive system is still very delicate and prone to disruption. Start with mild and healthy snacks, like a lettuce leaf hung up in the brooder, some oatmeal scattered in the brooder, or some corn kernels chopped up very small.

When you do introduce snacks, it is also essential that you provide the baby chicks with a ready supply of grit in a separate container inside the brooder. This fine granular substance is swallowed into the chicken’s gizzard, where it works with the power of the organ’s muscle contractions to mash up food into a digestible slurry.

Commercially produced grit made of sand, granite, or parakeet can be obtained and is specially formulated in size and composition for baby chicks. Do not give grit formulated for adult birds to baby chicks. Never feed ground up oyster shells to baby chicks; the high levels of calcium in the shells will result in potentially deadly damage to the bird’s kidneys.

At eight weeks of age, baby chicks should be shifted off the starter feed and in its place, they should be given “grower feed” (at this age, they can also explore more complex snacks, like worms, bugs and chicken scratch).

To help chicks make this transition, mix starter feed and grower feed together, gradually shifting the proportion of the combination towards more and more grower feed over a couple of weeks.

Grower feed provides less protein than starter feed (typically about 16%). Chickens should continue on the grower feed until they reach the start of their laying age, which is usually around 18 to 21 weeks of age, depending on the breed.

Whether or Not to Use Medicated Food 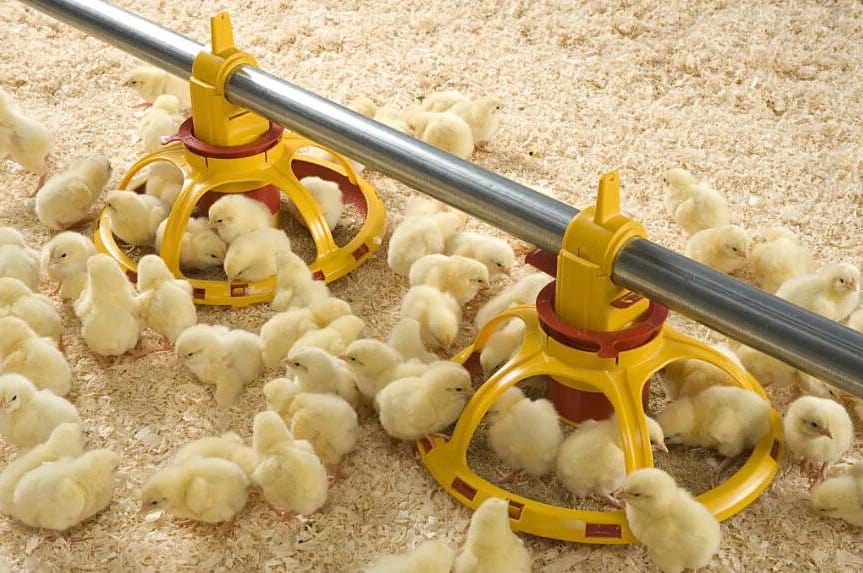 Baby chicks that have been vaccinated against coccidiosis already, either by a veterinarian or by a commercial hatchery, must not be fed medicated feed as it will kill off the coccidiosis strain in the vaccine and render the bird susceptible to the disease.

Baby chicks who are kept in a clean brooder that is regularly emptied of waste and provides plenty of space are less likely to contract coccidiosis and so generally do not require medicated feed.

Chicks who are raised in cramped conditions, such as factory farms or in household settings that involve more than 50 chicks in one space, are likely to contract the disease and thus should be given medicated feed. Some medicated feeds contain antibiotics, but these should only be used under instructions from a livestock veterinarian.

Ensuring that sick, malnourished, or underdeveloped baby chicks are properly hydrated is the first priority. Use a dropper or a spoon and, if necessary, water fortified with electrolytes.

The finely chopped-up hard-boiled egg can provide sick baby chicks with a boost of protein and many of the nutrients that their body needed to absorb when it was inside the egg. These can help it start to recover its stamina and eventually shift to starter feed.