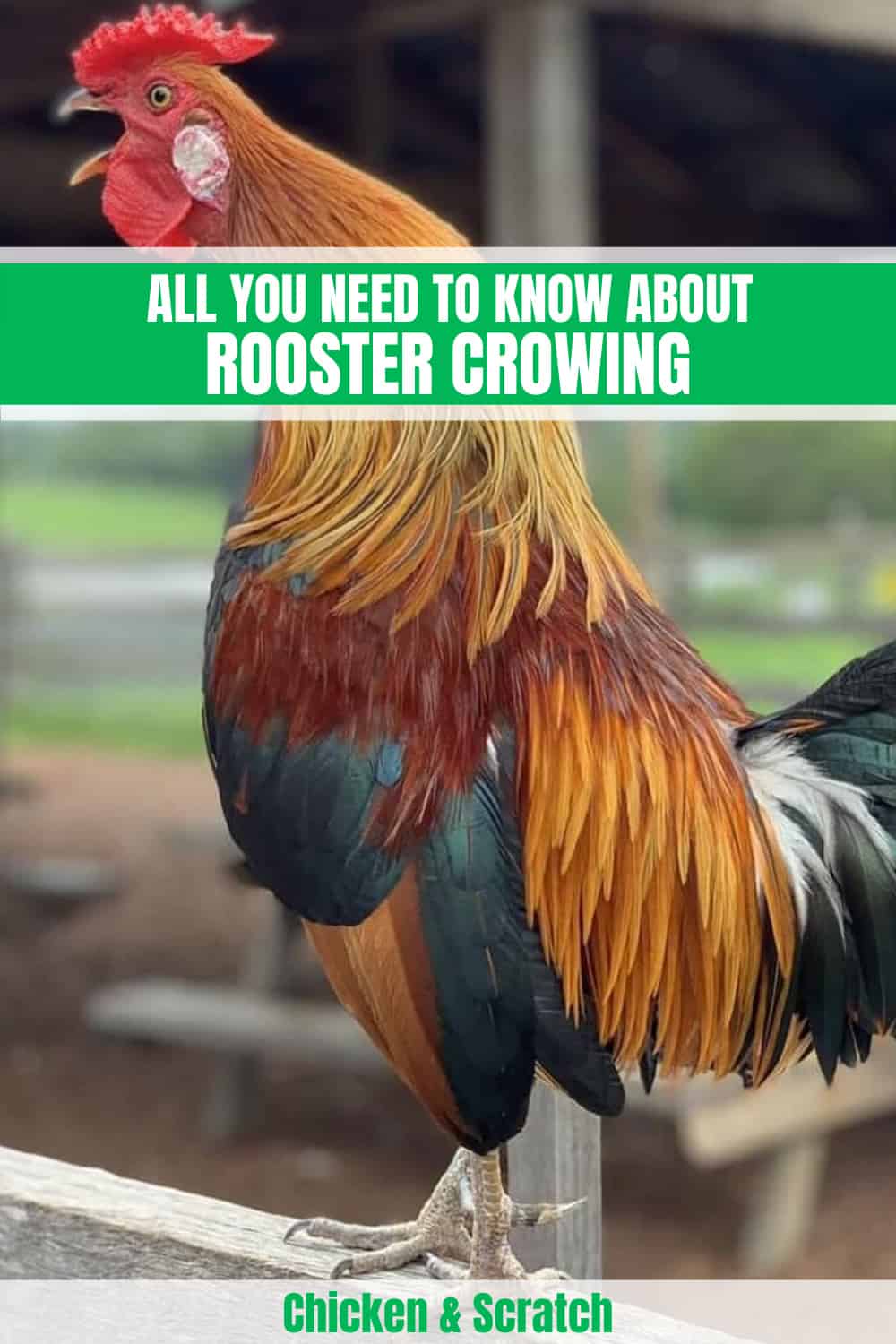 Crowing is a behavior that is inseparably tied to roosters. Whether depicted in a cartoon, a book, or a movie with a rural setting, if you see a rooster it almost certainly about to crow. However, rarely do we take the time to ask why roosters behave this way.

While we like to think of roosters as nature’s unwanted alarm clocks, the psychology and motivation behind their crowing behavior are quite complex. There is not a single impetus driving a rooster to crow. Let’s take a look at the myriad of reasons that cause a rooster to sing their distinctive song.

What are the three primary reasons why a rooster crows?

Let’s take a look at each of these fascinating behaviors in more detail.

To Attract a Mate 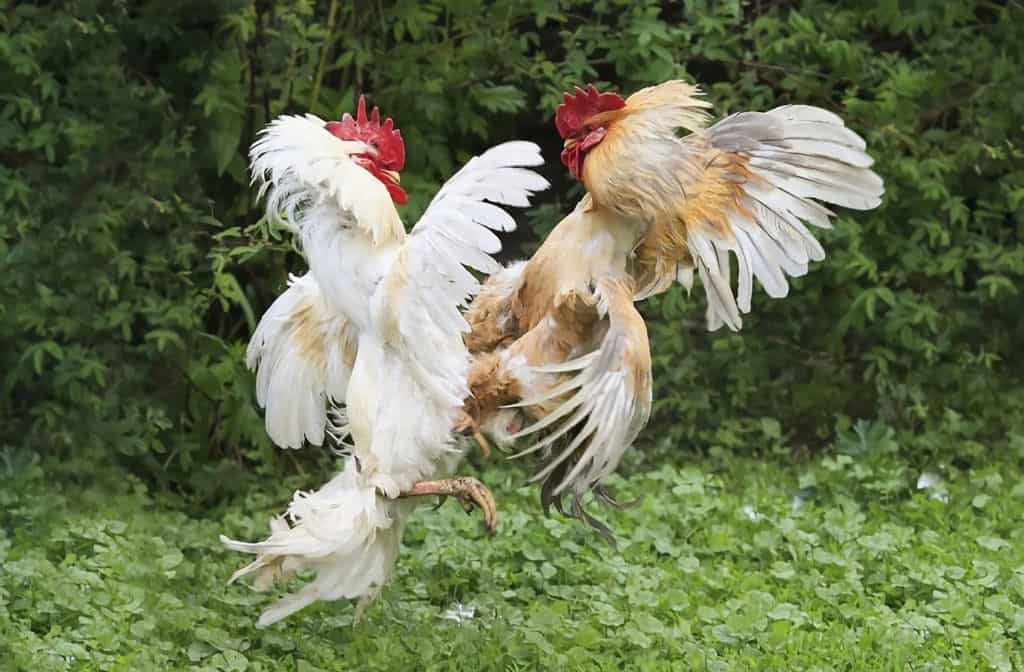 As with a vast majority of seemingly-strange animal behavior, one of the primary motivations for roosters to crow is to attract a mate. While our human ears struggle to detect and nuances between calls, scientists have analyzed the crows of distinct roosters and found that each rooster has a slightly different crow.

Thus, many researchers have concluded that the slight changes between each rooster are used as a method of impressing potential mates and out-gunning competing roosters.

The number of changes is extensive. Many roosters like to introduce a warbling effect into the calls as a sign of complexity and health. Further, the length of the song itself will vary between animals. While a rooster’s crow may seem arbitrary to many listeners, they are playing a distinct and repeatable song.

Depending on the rooster, this repetition may occur as often as every two minutes, or as infrequently as every ten. While the studies have no been wholly conclusive, it appears that hens tend to me more quickly attracted to roosters that exhibit longer and more complex songs.

Beyond the complexity of the call, there is also a much simpler variable: volume. One of the key differences in the crows of different roosters is how long they can become. While not always true, a larger rooster can typically produce a higher maximum volume compared to a smaller specimen. Thus, exhibiting a higher volume is a means by which roosters can brag about their size, strength, and health.

This effect is amplified when multiple roosters are within the hearing range of each other. When placed in the vicinity of another rooster, roosters tend to increase the volume of their crowing. This often results in a kind of competition between the males, resulting in a back-and-forth battle with increasing volume each round.

In extreme instances, agitated roosters have been known to damage their lungs or vocal cords in an attempt to out-shine another rooster. They are liable to become so engrossed in outperforming the other, and winning the affection of a mate, that they forget any self-preservation instincts and overwork themselves. While they typically recover from these episodes, the damage can sometimes be permanent.

The issue of volume has two components. First, if asked to choose between two roosters, a hen is likely to choose the larger and more aggressive rooster. Thus, showing an ability to out-crow their competition is an advantage to winning a mate. However, the issue can be much simpler.

Chickens are fairly simplistic animals who are often distinctly indiscriminate in their mate selection. Combined with their poor hearing, a hen will often choose the first viable mate she encounters. Therefore, sometimes the matter of crowing loudly comes down to being heard first, rather than impressing anyone. 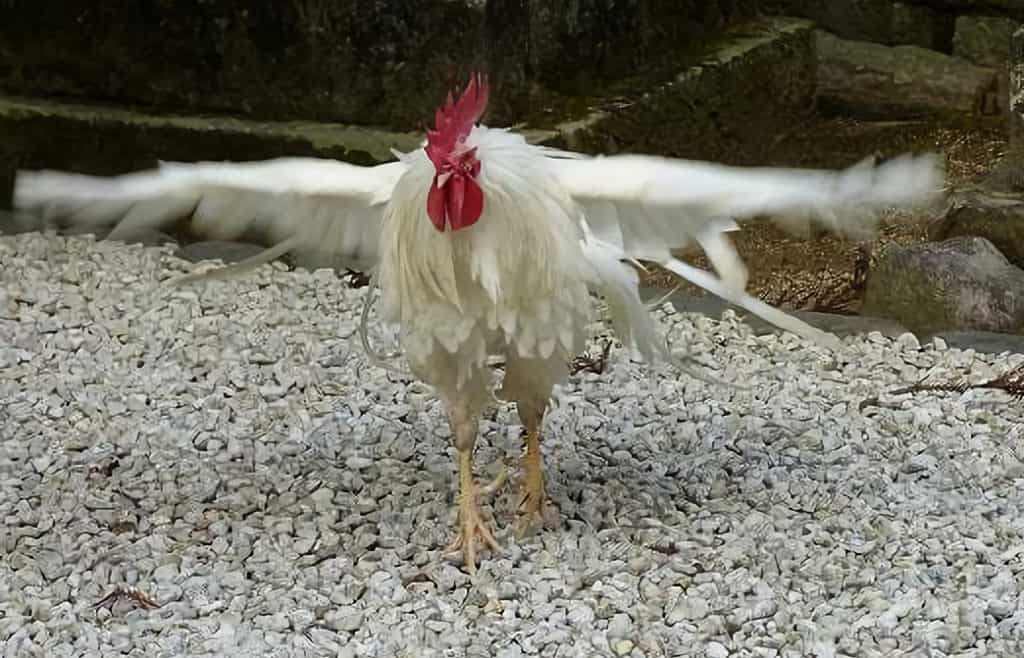 Despite their flashy looks and imposing talons, roosters are surprisingly vulnerable creatures. While they can technically fly, their ability to fly long distances or with any agility is extremely limited. Further, they have limited natural defense mechanisms.

Though they do have a rudimentary ability to fight with other animals by using the talons or beaks, they are simply no match for many predators. Thus, if they are poised with being attacked by a pigeon or other small animal, a rooster will be able to respond with force. However, any larger animals require the rooster to become more creative.

When confronted with a predator, roosters use a shock-and-awe approach to scaring away the other animal. This is a simple learned response based upon their limited options. If being attacked, a rooster will try to make itself look and sound as large as possible. This includes inflating its chest, raising its wings, and crowing as loudly as possible.

This call is often distinct from the mating call discussed above. A warning or threatening crow will be higher-pitched, more repetitive, and louder. Unlike a mating call, the goal is not to be artistic or to display their nuanced creativity. When under attack, the rooster’s goal is simple: make as much noise as possible.

You can often hear the differences yourself. While a typical mating call will have a great amount of tone variation and melodic variation, a threatening call is more simplistic. Generally, a rooster trying to use intimidation will alternate back and forth between one or two tones, similar to a police siren. When it comes to warding off an attack, the volume is the only goal. 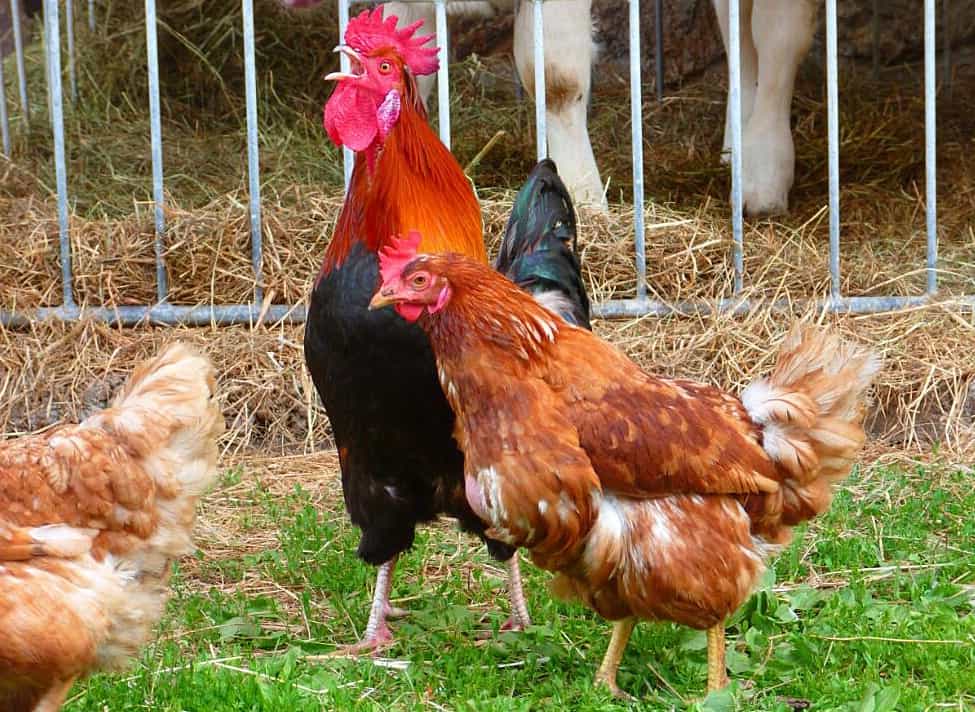 Unlike hens, which are primarily communal and docile animals, roosters are fiercely territorial. Thus, marking their territory is one of the primary reasons why a rooster may crow. In any given community, there will be much fewer roosters than hens. Hens often outnumber their male equivalents by over a hundred to one.

Therefore, roosters are allowed to rule a fairly large range of territory. A typical rooster will lay claim to an area of roughly an acre. It considers this range to be its property and will become disturbed if its land is intruded on by another male bird.

Crowing for territorial reasons takes on two forms. A rooster will often seek to remind other birds in the area that a certain portion of land is its territory. This is generally the function of the “alarm clock” morning crowing that roosters are so well known for. When crowing for this reason, a rooster will attempt to find the highest perch possible.

Normally, this will be a tree or fence post. Then, the rooster will project out into its territory. This call normally resembles its mating song, but with even more embellishments added. In fact, territorial marking will often have the secondary effect of attracting a mate.

However, roosters will also crow to protect their territory. If another rooster invades the area that a rooster considers its own, then an average rooster will not be shy about letting the intruder know it is not welcome. The offended rooster will approach the intruder aggressively with its wings flapping and beak open.

Then, the rooster will let out a loud screeching noise. Unlike a mating call or predator defense, this is a much higher-pitched tone, sounding almost like a smoke alarm. A rooster can only maintain this tone for a few seconds before exhausting its voice. Thus, if a rooster becomes incapacitated in this confrontation, the other rooster will often take a claim to the new territory.

For the Fun of It 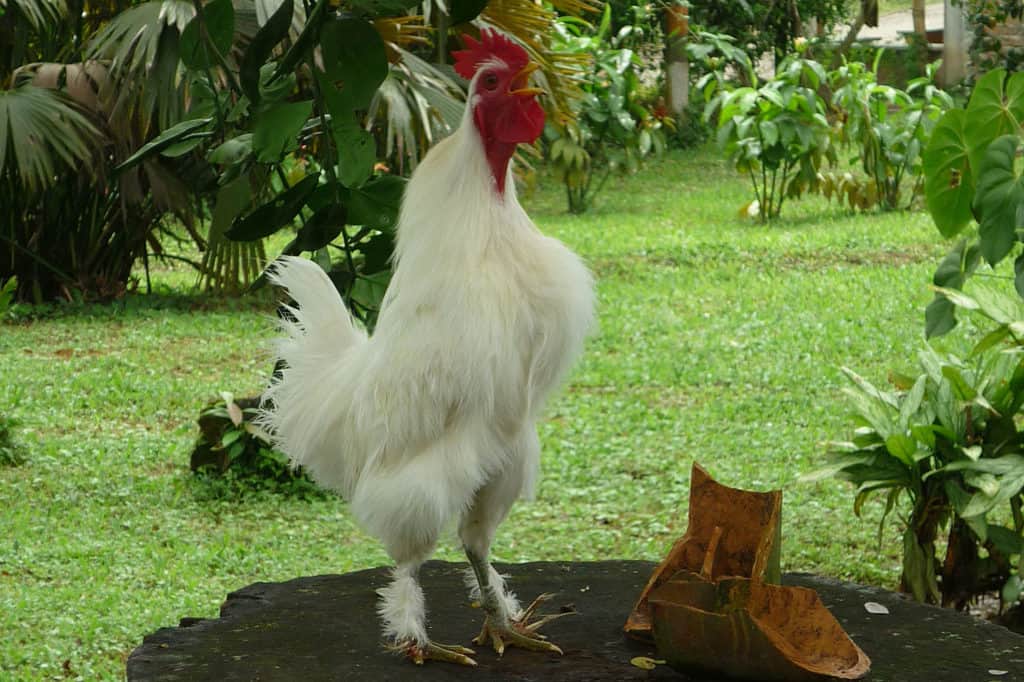 The final reason that roosters crow is also the most wholesome. They simply seem to enjoy it. Scientists observing roosters in the wild noticed that they often appear to crow without any stimulation or apparent reason. A rooster in isolation will crow regardless of light conditions, other birds, or barometric pressure. Thus, the most plausible explanation is that roosters will often crow simply for fun.

Yet again, the style of their song changes when they are crowing for mere recreation. Roosters appear to use this time as a chance to experiment. Thus, a “play” song will rarely be the same twice. Rather, they will vary their tone and melody in an attempt to perfect their mating or aggression calls.

Their behavior during these periods is fascinating. When practicing a happy song, a rooster can often be seen dancing or hopping playfully. However, when practicing a predator or territorial call, they will emulate the aggressive stance as if there was an actual threat. Thus, it appears that roosters are capable of rudimentary role-play that they use to practice their crows.

Finally, roosters will often crow without meaning to. Whenever a rooster is startled, they will commonly let out an involuntary “gasp” noise in the form of a crowing song. Roosters have even been observed to crow while sleeping, similar to a person speaking in their sleep.

So, why do roosters crow? Roosters do not crow just to signal the rising sun. Rather, a roosters crow is an important adaptation that assists it with almost every aspect of their lives.

Thus as a person’s tone of voice may change depending on the circumstance, so too will a roosters song change for varying purposes. So next time you hear a lone rooster crow, spend some time thinking about what it might be trying to say.

1 thought on “Why Do Roosters Crow?”