If you’re in the chicken business in any capacity, you likely know how important it is to correctly sex a chicken. It doesn’t matter if you’re buying, selling or simply looking to sort new chicks into your flock, being able to accurately sex a chicken while it’s still small is a very important skill to have.

It’s also very hard to do.

Luckily, there are a few different ways to sex a chicken, and if one way doesn’t work for you, you can always try another.

The most accurate and successful way to sex a chicken is known as venting or vent sexing. However, it’s also quite difficult and takes someone with a lot of skill to do.

Venting works best on chickens one day old. With this method, you hold the one-day-old baby chick in your hand and push it down slightly below the vent so as to spread it open. This allows you to actually see the chick’s sex organs to tell if it’s a male or female.

Male and female sex organs can look remarkably similar in chicks this young, so while venting is the most reliable way to sex a chicken, it’s still tough. It takes a lot of practice, and even experienced breeders don’t always make the correct determination.

Furthermore, if it’s done incorrectly, it can be very dangerous for the young chick. If you squeeze too hard or do anything wrong, you can irreparably damage its sex organs or kill the chick. This process is never recommended for the average person. You can, however, ask a breeder if they can vent sex your chick for you.

This video shows the venting process and how delicate you must be while performing it.

Feather sexing a chicken, also referred to as wing sexing, is another fairly easy and straightforward way to sex a chicken. As with venting, to use this method, you must do it when a chick is about a day old. If you wait much longer, its feathers will be well-developed, and you’ll be unable to see differences between males and females.

The wing feathers of day-old male and female chicks look remarkably different. Female chicks have alternating feather lengths on their wings. There will be a long one, followed by a short one, then another long one, and so on and so forth. By contrast, male chicks’ wing feathers will all be the exact same size.

This PDF from Aviagen.com has a step-by-step guide with pictures on how to properly feather sex a chicken. Consult it before trying this yourself, and make a special note of how to properly hold the chick while sexing it.

A chicken’s comb can tell you a lot of information about it, including its gender. If you’re looking for a less invasive way to sex a chicken, you can keep an eye on its comb. This method of sexing a chicken is not as accurate as the above two methods, but it’s easier and doesn’t take as much skill or practice.

If you’re using this method to sex a chicken, you’ll have to watch the chick as it grows. Once chicks are a few weeks old, their combs will become much more noticeable. A taller, fuller comb on a chick’s head most likely means it’s a male.

The color of a chick’s comb can also be an excellent indication of its gender. In almost all cases, a male chick’s comb is going to be much brighter than that of a female. It doesn’t matter what color the comb is; it can be pink, red, neutral color or some other. Regardless, the males’ will be brighter than the females’.

The same is true of the chicks’ wattles. In male chicks, the wattle will grow faster, longer and turn a brighter color than those of the females. So if you have a large batch of chicks, watch for those that begin to grow wattles the earliest. Those are likely males.

*Note: Using a chick’s comb to determine its gender may not work as well with pea comb breeds of chicks. Only chicks with regular combs can be sexed in this way.

As chicks grow older, another non-invasive way to determine their genders is to keep a close eye on their behavior. There are certain behaviors that are very unlikely in female chicks. These include fighting and giving humans what some farmers like to call “the stink eye.”

Early signs of fighting among chicks can include several different things. Flying directly into one another or slamming into each other’s chests -think of football players bumping chests on the field – are two examples. Incessant amounts of pecking or kicking at each other are others.

If you notice your young chicks doing any of these things, it’s not likely that your chicks are female. Of course, this is not a 100% guaranteed way to accurately sex a chicken. Every now and then you’ll come across an aggressive female that likes to fight. However, it’s rare. So if you do have chicks fighting, they’re probably males.

The stink eye is another trait common to male chicks as opposed to females. This is when a chick looks you directly in the eye, often cocking its head. This is bold behavior not usually seen from females. If you have baby chicks that do this, they’re probably male.

Other male chick’s behaviors include ruffling feathers at other chicks, being first to the food and cooing at female chicks.

Listen for the Crow

A lot of times, people discount listening for a crow as a way to sex a chicken. The idea is that by the time a chick is crowing, it’s large enough to visually see it’s a rooster. However, this isn’t always the case. Roosters will generally start crowing at about four months of age.

By this time, it’s true that most breeds already look like roosters. However, there are actually some instances in which a chicken actually begins crowing before you can visibly tell that it’s a rooster. In these cases, when all visual cues have failed you, you can simply listen for a crow.

There are other instances of chicks crowing as young as a month old. A one-month-old chick is still fairly gender-ambiguous visually. If you’re lucky enough to have roosters start crowing at a month old, you can be pretty positive you have a rooster.

Despite rumors to the contrary, we’ve never heard a hen crow. People claim it happens, but in all our experiences with chickens, this has not been the case.

So if you have a month-old chick crowing or a half-grown chick whose gender you can’t determine, listen to see if it starts crowing. If a chicken has reached six months of age and still hasn’t crowed, it’s probably a hen.

Color of Their Down Feathers

In cases where the parents of chicks came from two different breeds, you can actually use the color of the down feathers to sex a chicken. If the parents of a chick are both from the same breed of chicken, this will not work. However, if you mix two separate breeds, the down is a great indicator of gender.

There are no standard colors we can give you to use. For instance, we can’t just say, “If your chick is light yellow, it’s a female.” It isn’t quite that easy. However, there are guides all over the internet to tell you what the down colors of different mixed-breed chicks mean.

If you do a simple Google search for “down color & gender in chicks with X and X parents,” replacing the X’s with actual chicken breeds, you’ll find what you’re looking for fairly quickly.

How Not to Sex a Chicken

There are tons of old wives tales out there telling people how they can identify the genders of their chickens. Please don’t listen to these. The only credible ways to sex a chicken are those listed above. If someone tells you another “sure-fire” way to identify a chicken’s gender, it’s not going to be accurate.

Some of these old wives tales include the following:

The Shape of the Egg

For decades, people have been saying that you can tell the gender of a chick before it ever hatches simply by looking at the shape of the egg. It’s believed by some that if an egg is round, that egg contains a female chick. Conversely, if the egg is narrow and pointed, it’s believed to hold a male chick.

This is utter nonsense. The shape of an egg has literally nothing to do with the gender of the chick inside. Don’t fall for it. If you’re determining your chicks’ genders based on this, you’ll have just as much luck flipping a coin.

Turning a Chick Upside Down

Another false tale about determining gender involves turning a chick upside down. It’s believed that a female chick will stay that way, just hanging there limply. It’s believed that if the chick is a male, though, it will start fighting to right itself.

This, too, is nonsense. Furthermore, turning your chicks upside down can potentially hurt them. So please don’t flip baby chicks upside down. It will not give you any reliable information about the chick’s gender, and it could cause a lot of harm. 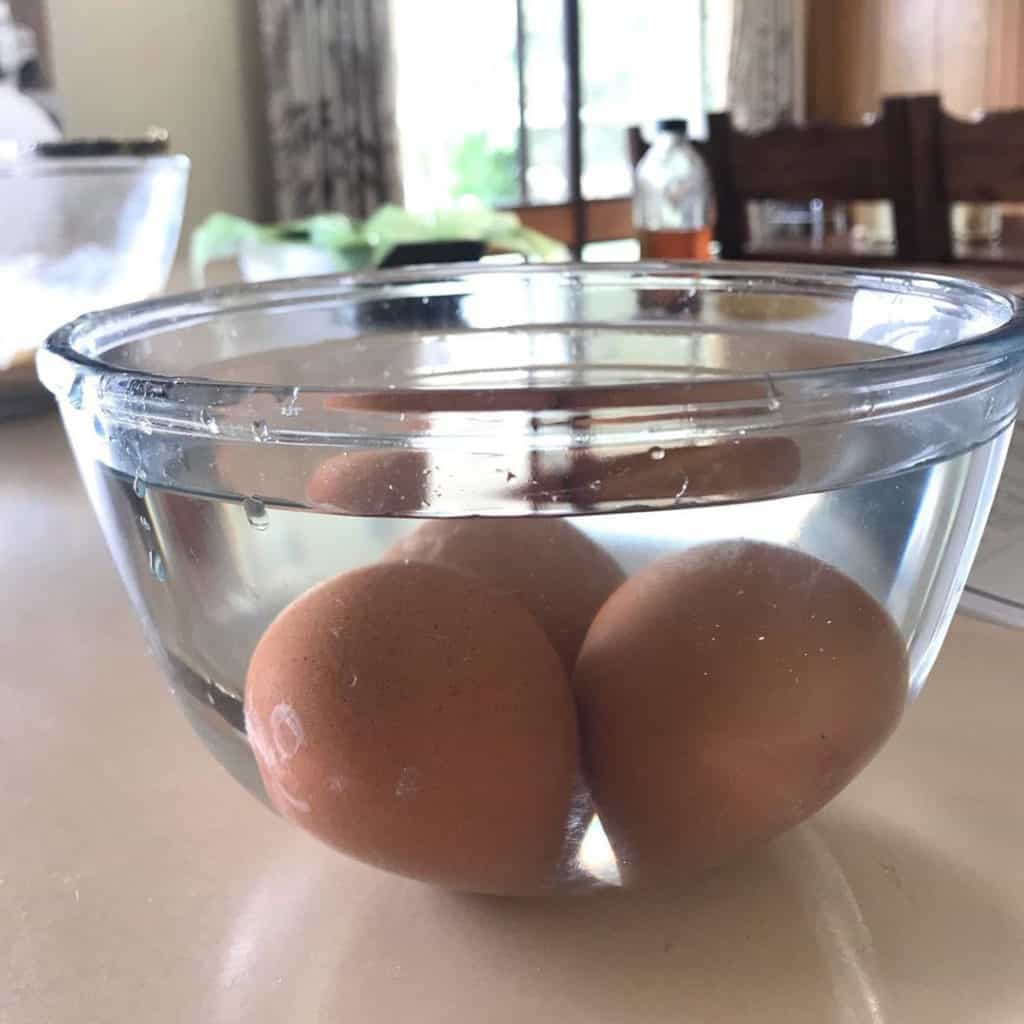 Another crazy story about determining gender is to put an egg in water and see if it floats. If it does, the egg is assumed to contain a female chick. If it doesn’t, the egg is supposedly home to a male chick. This is utter rubbish and can potentially kill the chick inside the egg.

There is actually an egg float test, but it has nothing to do with determining the sex of a chicken. What the egg float test actually does is tell you how fresh an egg is for eating.

You drop an egg in water. If it floats to the top, it’s an old egg and should be thrown away. If the egg sinks to the bottom of the glass of water and lays on its side, it’s a very fresh egg. If the egg sinks but sits upright, it’s not super fresh, but it’s still edible.

There are six reliable ways to sex a chicken. Of these six ways, there are only two (venting and feather sexing) which are incredibly reliable; we’ll say 90%. Listening for your chick to crow is also a very reliable way of determining gender, although it’s not always helpful if the chick is half-grown before it crows.

The other ways are less reliable, but they can still be effective. They are also less invasive than venting or feather sexing. Other than these ways, there’s no other reliable way to sex a chicken. Please avoid old wives’ tales, and be aware that mistakes do happen. Never count your chickens before they hatch, and never count your roosters before they crow. 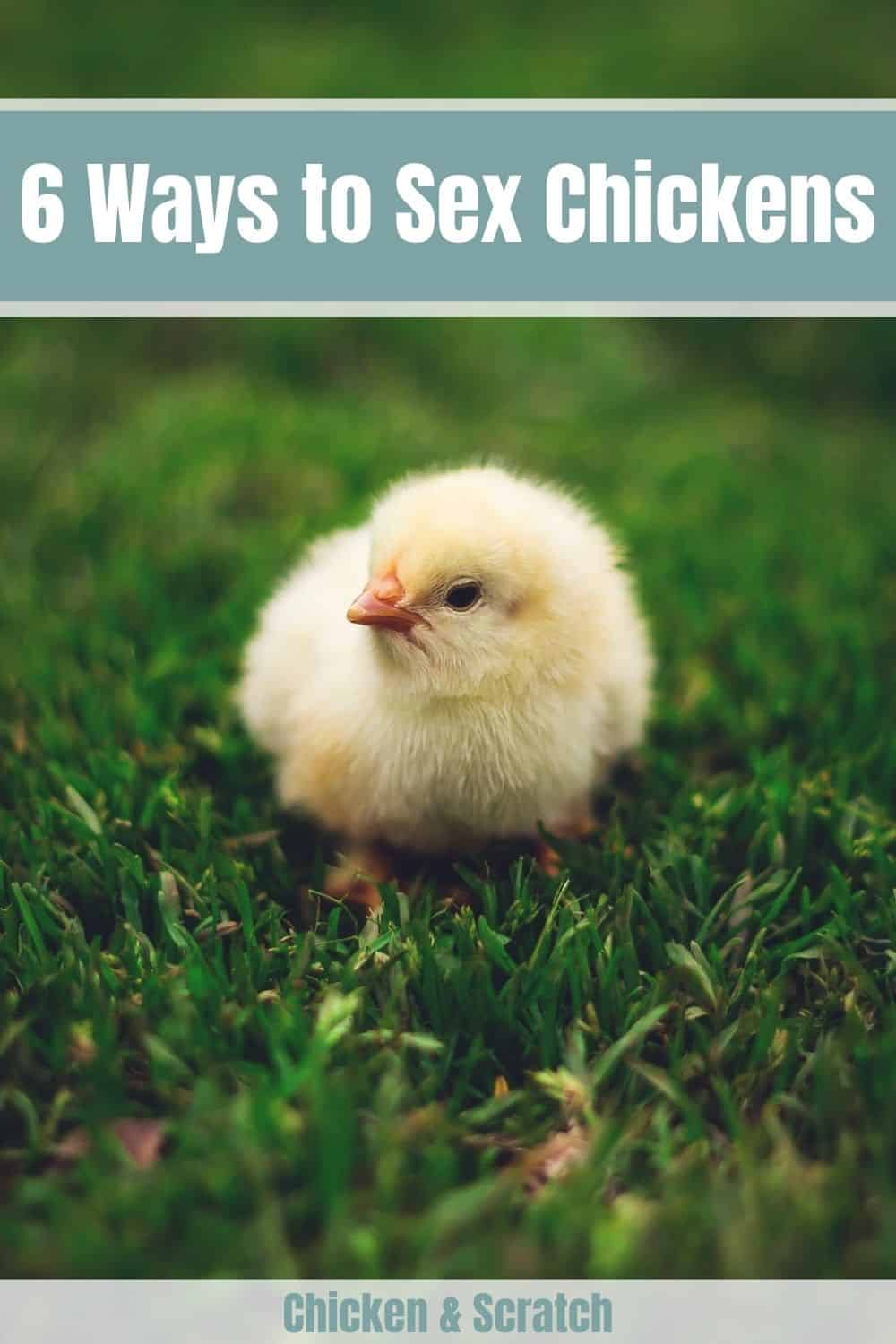 13 thoughts on “How to Sex Chickens: 6 Ways to Determine Hen Or Rooster”

Chicken Scratch & The Foundry is a participant in the Amazon Services LLC Associates Program. As an Amazon Associate, I earn from qualifying purchases by linking to Amazon.com and affiliated sites.
56K Shares
Tweet
Pin56K
Share23