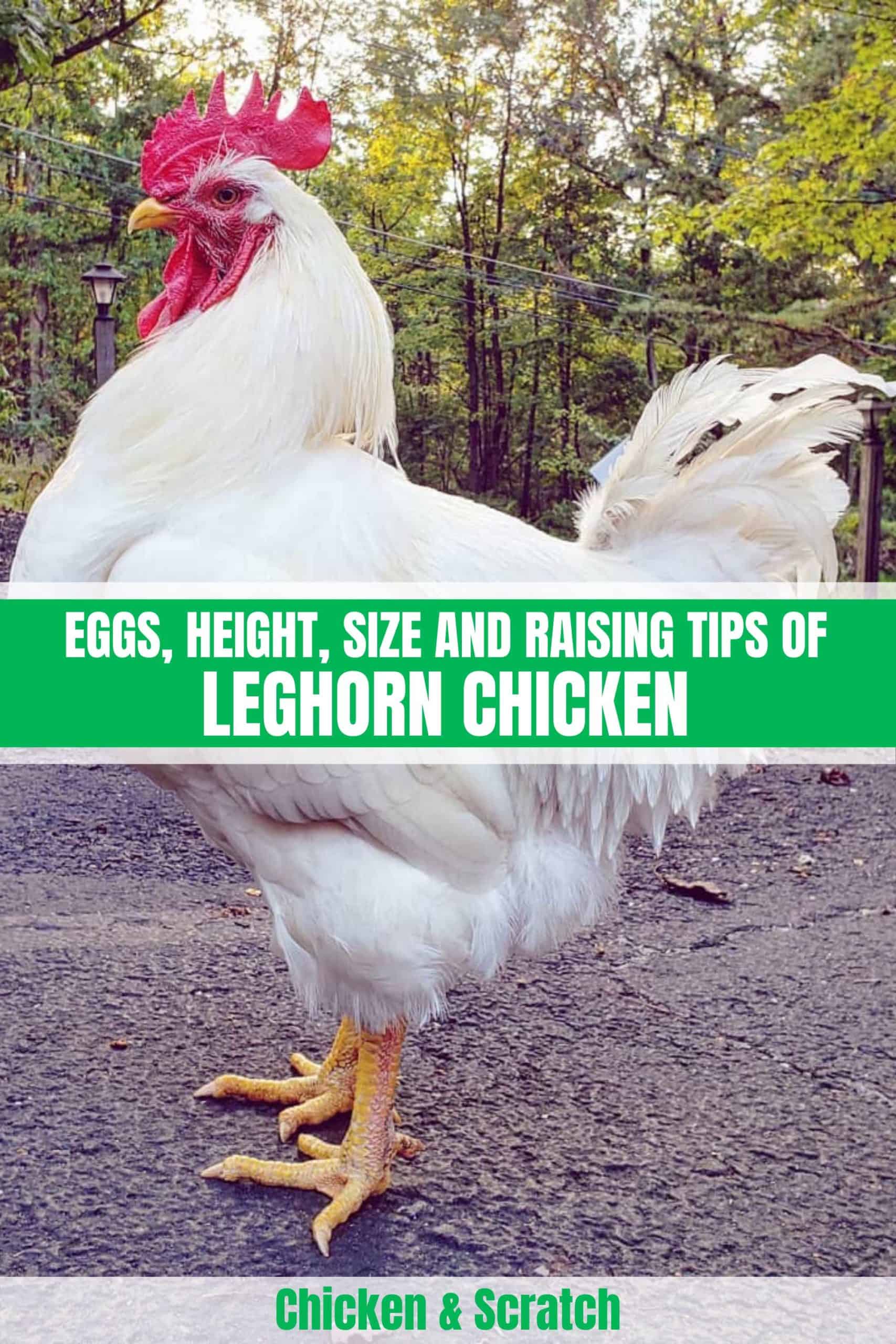 If you ever watched the Looney Toons cartoons as a youngster, you likely remember the regal rooster Foghorn Leghorn. Foghorn often feuded with the farmer’s dog, and he was often not nearly as intelligent as he thought himself to be. However, his antics make him the most famous Leghorn chicken across the United States!

The ancestors of the Leghorn originally came from Italy; in fact, the first American Leghorns were referred to as “Italians.” However, it is not known for certain exactly where these chickens came from. The Tuscany region of Italy was home to many landrace chickens with white feathers over their bodies.

We do know that the chickens exported to the United States from a port city in Italy named Livorno. The word “leghorn” is a derivation of the word “Livorno,” and, since the chickens were shipped to the US from this city, they became known as Leghorn chickens.

Documentation shows that these birds were shipped to the United States in 1828, but once they were brought on American soil, little is known about them. 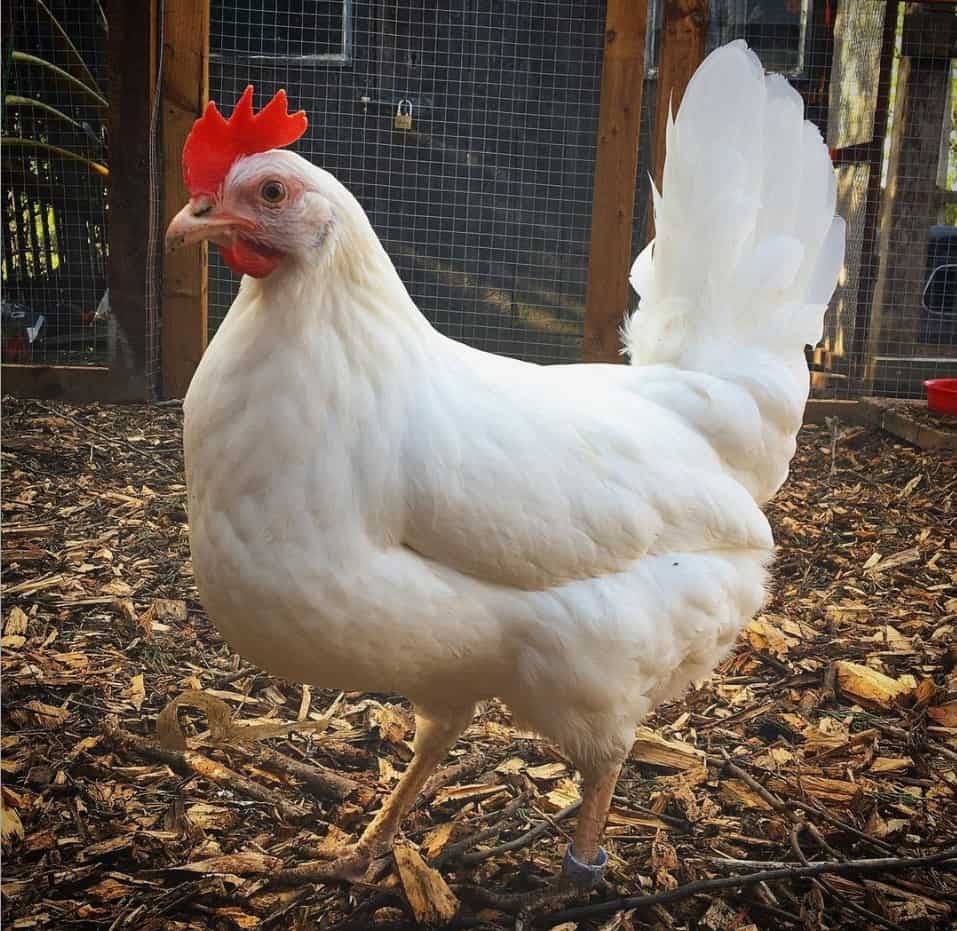 The first Leghorns were brought to Mystic Harbor, Connecticut by Captain Gates. Once introduced to American farmers, these birds were interbred with other chickens in order to produce a rose comb.

European chicken enthusiasts bred the Leghorn with the Minorca and then exported the resulting chickens to the United States. It was these later versions of the Leghorn breed that were introduced to the poultry industry in 1910.

Leghorns tend to be a rather thin bird, so they are not normally considered “table fare.” However, the hens are sought out for their production of eggs. The bulk of Leghorns utilized in the poultry industry function as industrial hens.

Breed Standard and Appearance of Leghorns 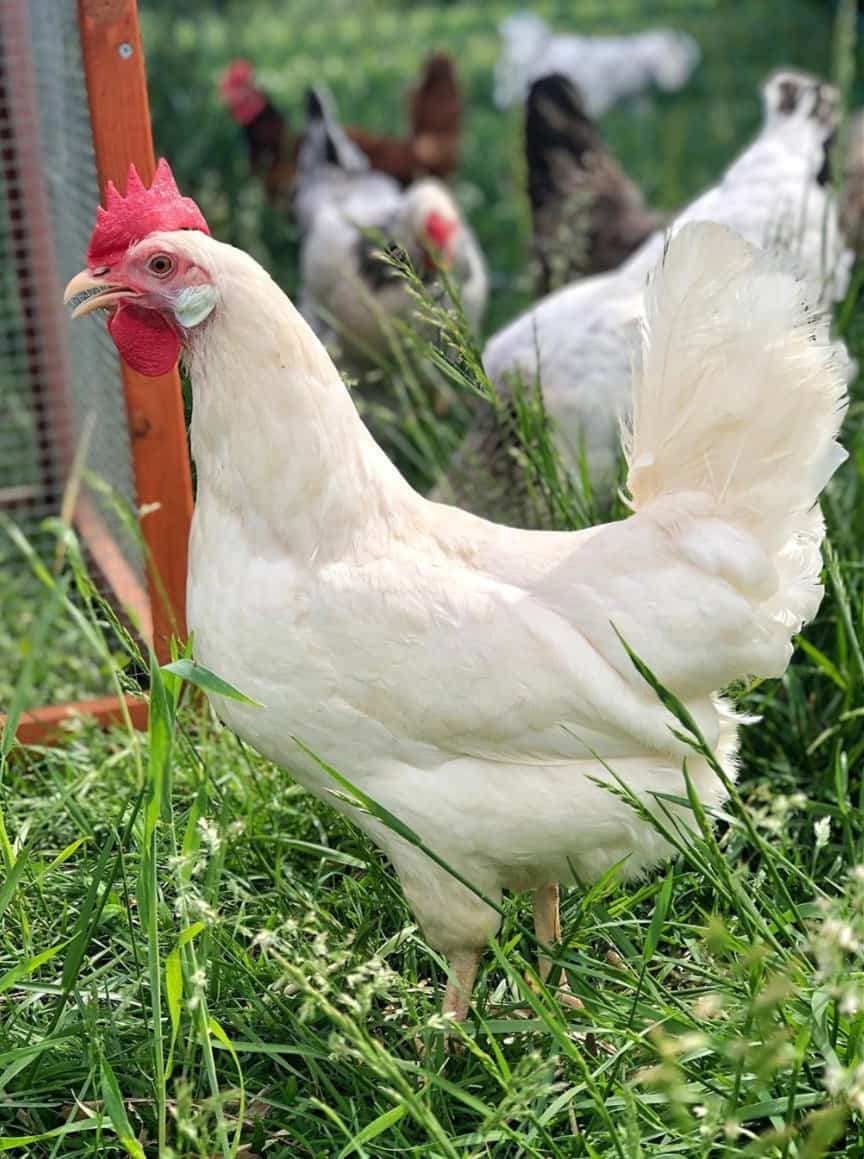 Although most Leghorns are white in color, they actually come in a variety of colors. The chicken will also either have a single comb or a rose comb. They also typically have a red wattle. The white earlobes of the Leghorn are a designation that they lay white eggs.

They have yellow skin and legs; their eyes border on an orange/red color. They have four toes on each foot.

It should be noted that the standard weight of a Leghorn is 7.5 pounds for males and 5 pounds for a female.

Some groups do not accept the rose comb as a part of the standard for Leghorn chickens.

Foghorn Leghorn is known for his often ill-fated but brilliant plans. This is a nod to the fact that Leghorn chickens are actually quite intelligent. In fact, some experts describe them as “resourceful,” as they have a tendency to find their own food when left to their own devices.

They love to be active, and foraging is a favorite activity. They actually prefer to be “free range” chickens, but, if raised in confinement, they will adapt. It is best to provide some type of activity for them even when they are confined, such as proper perches.

The Leghorn actually flies quite well. If allowed to do so, they will roost in trees. They are also known to be noisy (the cartoon character was known to talk too much; again, this might be a clever allusion to the noisy Leghorn chicken).

Another word to describe the Leghorn is “high strung.” However, if the Leghorn is given ample room to forage and expel energy, he will be a great addition to any farm.

Be aware that the Leghorn does not interact much with humans, unlike some other breeds of chicken. Some experts advise that small children should not be left unsupervised around Leghorn chickens.

The Leghorn does tend to be shy and they may be flighty. While they might not actually cause any harm to a human, they might frighten young children who have little experience with animals. 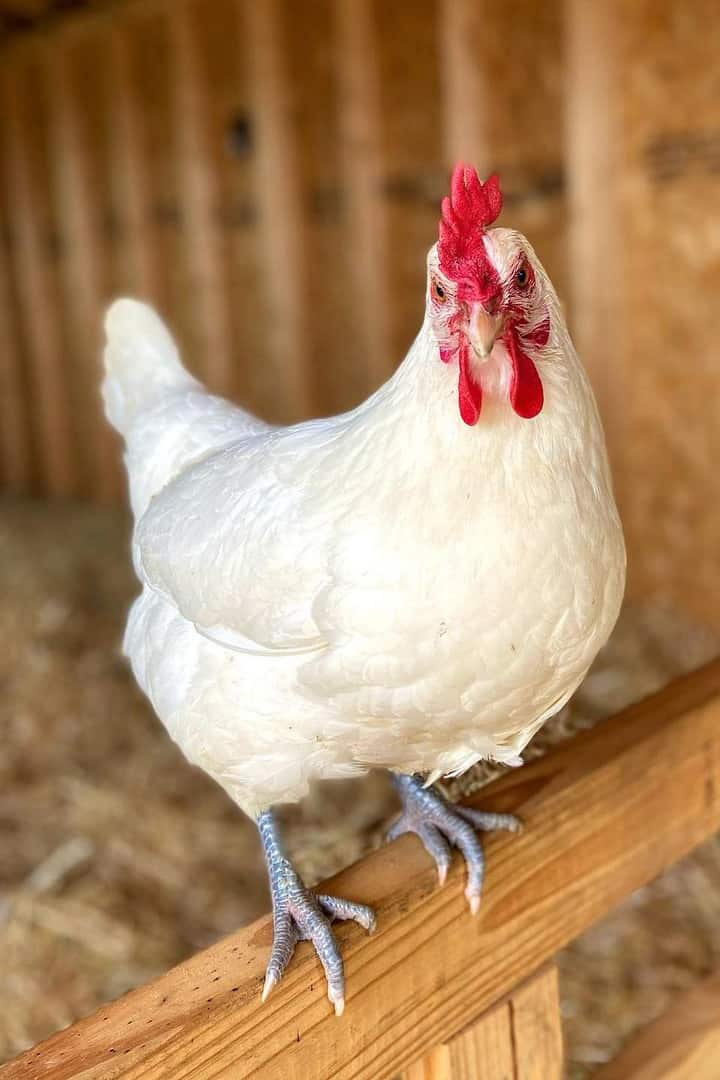 As previously stated, the Leghorn is typically used as an “industrial hen,” which means the Leghorn is a highly sought after laying hen. This is not without good reason – the Leghorn hen typically lays between 280 – 320 eggs per year, or at least four eggs per week.

Unlike some other breeds of chicken, the Leghorn is not one that will lay for up to a decade. They “lay well” until they are about four years of age; after that, the number of eggs which they produce per year drops.

The Leghorn is also highly sought after by the poultry industry because Leghorn hens lay larger eggs from the beginning of their laying cycle. In fact, by the time the Leghorn reaches age four, her eggs may be considered “extra-large” by industrial standards.

They tend to produce healthy eggs. However, they are not very good at being “broody.” In fact, this description of a Leghorn tends to be rare. 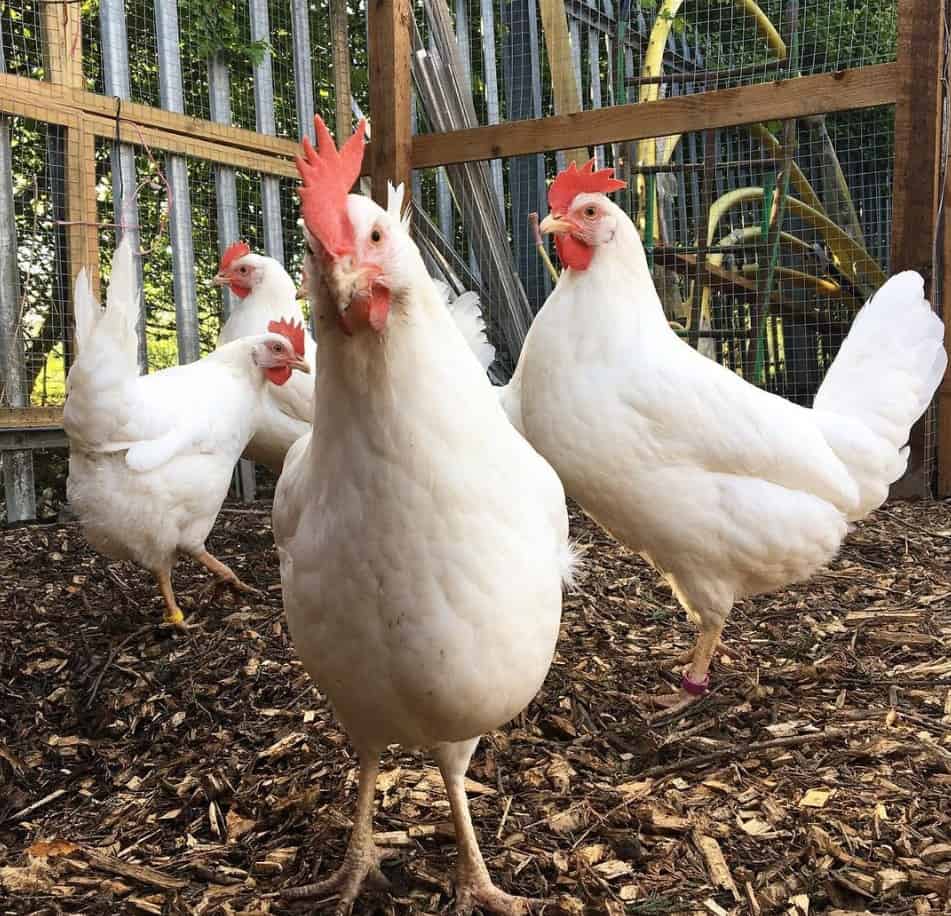 One other reason that Leghorn chickens tend to do so well in the poultry industry is the fact that they carry no real health issues.

The worst health issue they seem to have is a tendency in the single comb variety Leghorns to experience frostbite in the comb. The rose comb Leghorns do not have this issue.

They are great laying hens, and they rarely have any issues producing healthy eggs. 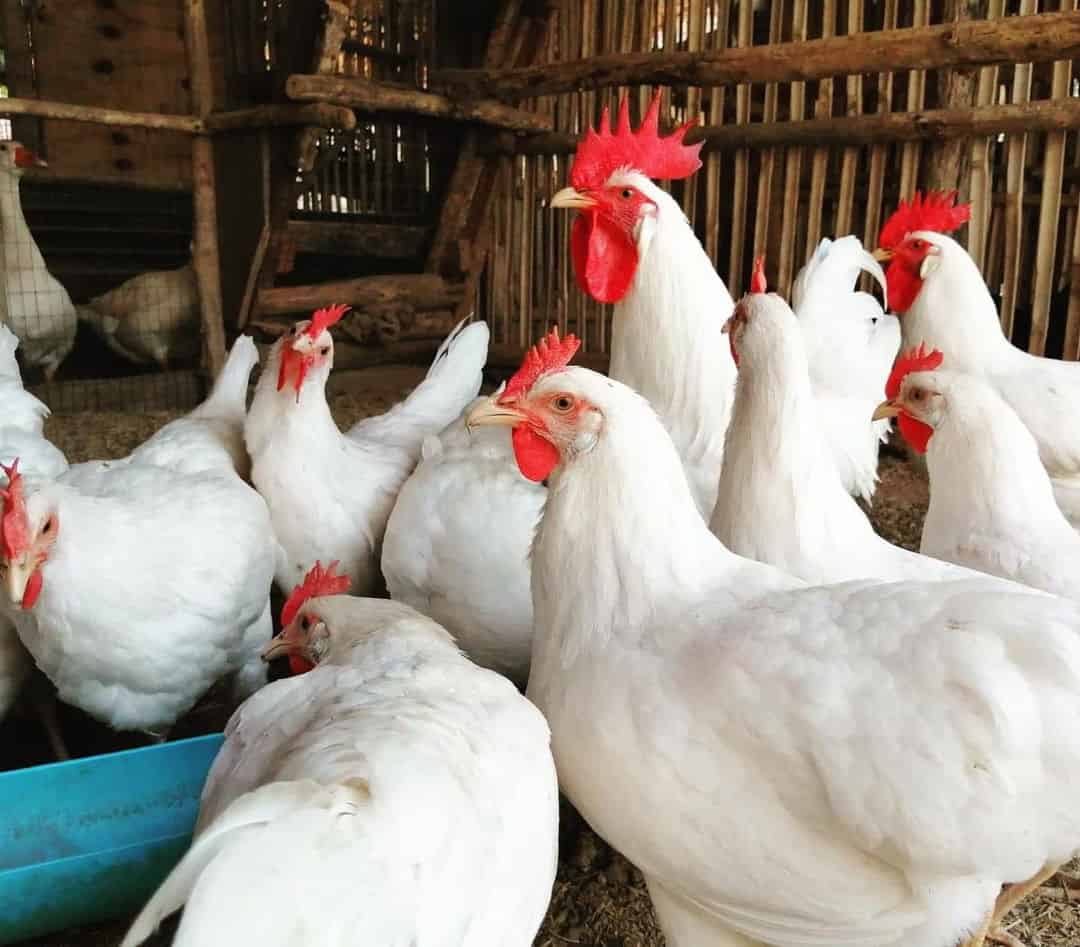 When it comes to raising Leghorn chickens, do furnish a place for them to roost and to be protected from the winter cold, but also give them plenty of areas to forage and “peck about” in.

This makes for a healthier bird. Also, in colder climates, be sure to “insulate” the comb of the Leghorn (single comb, particularly) with Vaseline.

The Leghorn is not recommended to be a free range chicken in an area that might be described as “urban” or “suburban.” The Leghorn does not mind territorial lines, and he pretty much goes exactly where he wants to go. They are also rather smart.

Keep this in mind when building a roost for the Leghorn. If you have neighbors to consider, you’ll want to build a covered roost and a covered run. However, let just one of the areas in your fenced-in run become open for any reason, and you’ll have a Leghorn that flies the coop!

These birds are also known to roost in trees, so a covered roost and run really is best if you do not have unlimited areas for the Leghorn to explore.

They love to forage, and they are also rather determined birds. Again, unless you have an unlimited place for the Leghorn to wander about, you’ll want a roost with a covered run to keep him contained.

Don’t expect the Leghorn to be a cuddly chicken, either. He will likely remain independent as this is what the original bird was like. At the same time, there are a few Leghorn owners who state that their chickens present a good bit of interaction with them.

The Leghorn chicken is one of the healthiest varieties of bird to raise, but give her a place to roost and be protected from harsh winter cold. They are independent birds that tolerate humans but aren’t considered very friendly. They lay well and have no real health issues.

The Leghorn is a favorite of the poultry industry, particularly where laying hens are concerned. However, this also makes them one of the most abused breeds of chicken.

Interestingly enough, many laying hens get a second chance at life when they are allowed to be rehomed (from the industrial life) to a backyard, free range life.

Remember, these hens tend not to lay past their fourth year, so many poultry farmers will allow for them to be bought and put in someone’s backyard. (Keep in mind that the Leghorn is not a very sought out “table” chicken; this probably gives him a little more attractive as a bird to be rehomed.)

The Leghorn does not require much in the way of food either. In fact, they love to look for the occasional worm or other tantalizing natural food (ticks, anyone?). They thrive on being allowed to be independent creatures, and they are a great addition to anyone’s backyard flock. 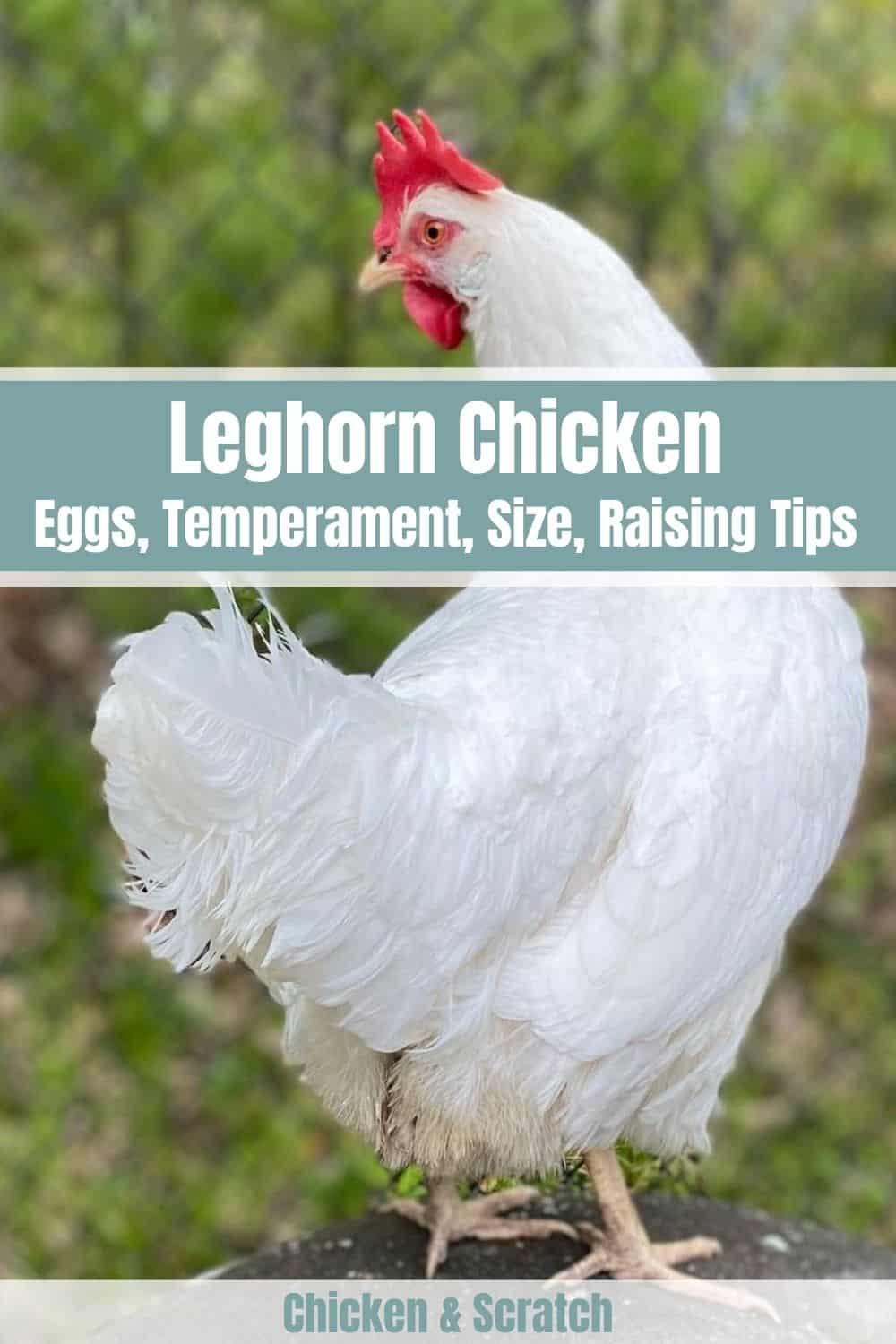