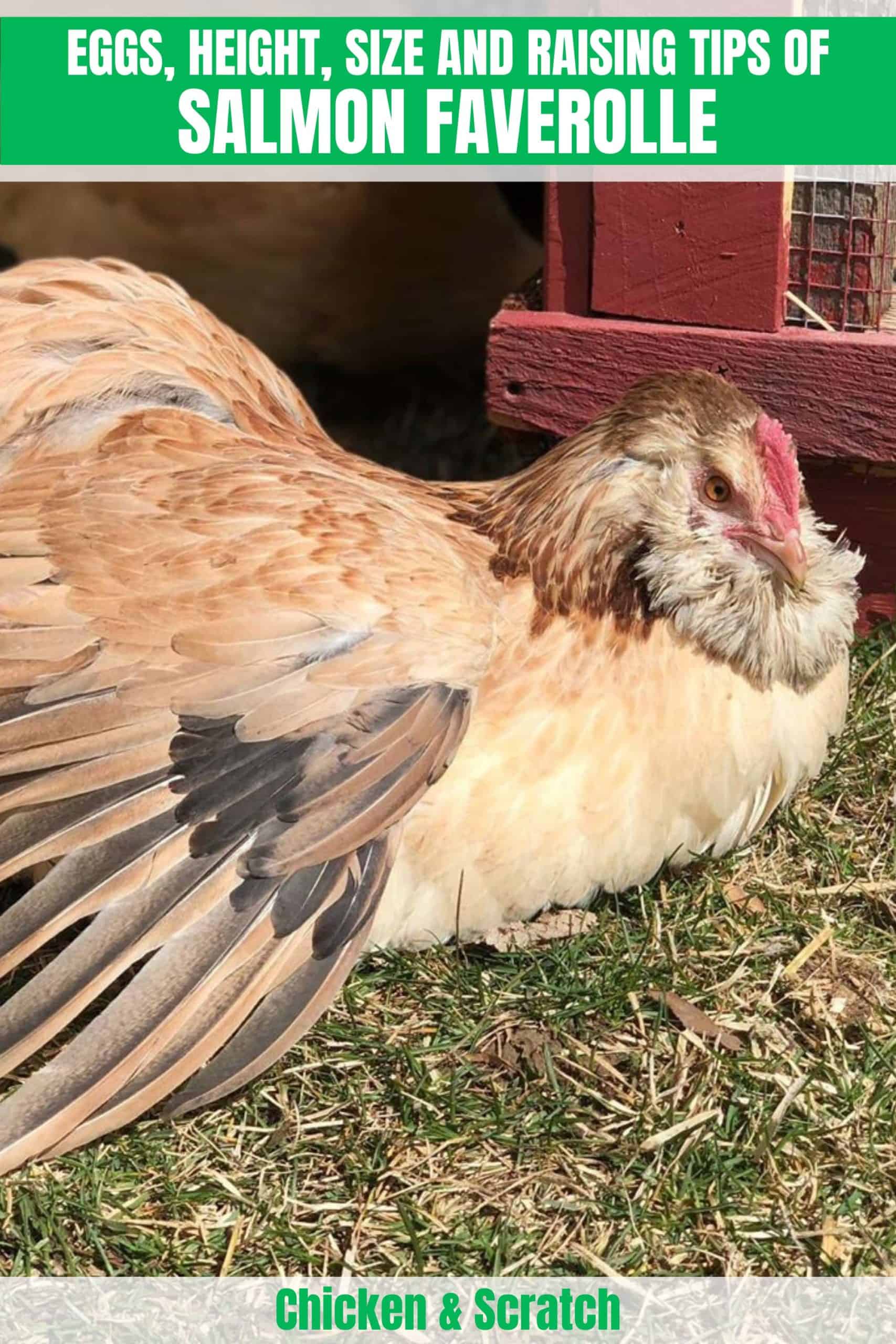 If you’re looking for the combination of an absolutely beautiful chicken with a great personality, you’ll find it in the Salmon Faverolles. This personable chicken is described as a “barnyard comedian,” and they are much more likely to interact with their human owners than other breeds of chicken. 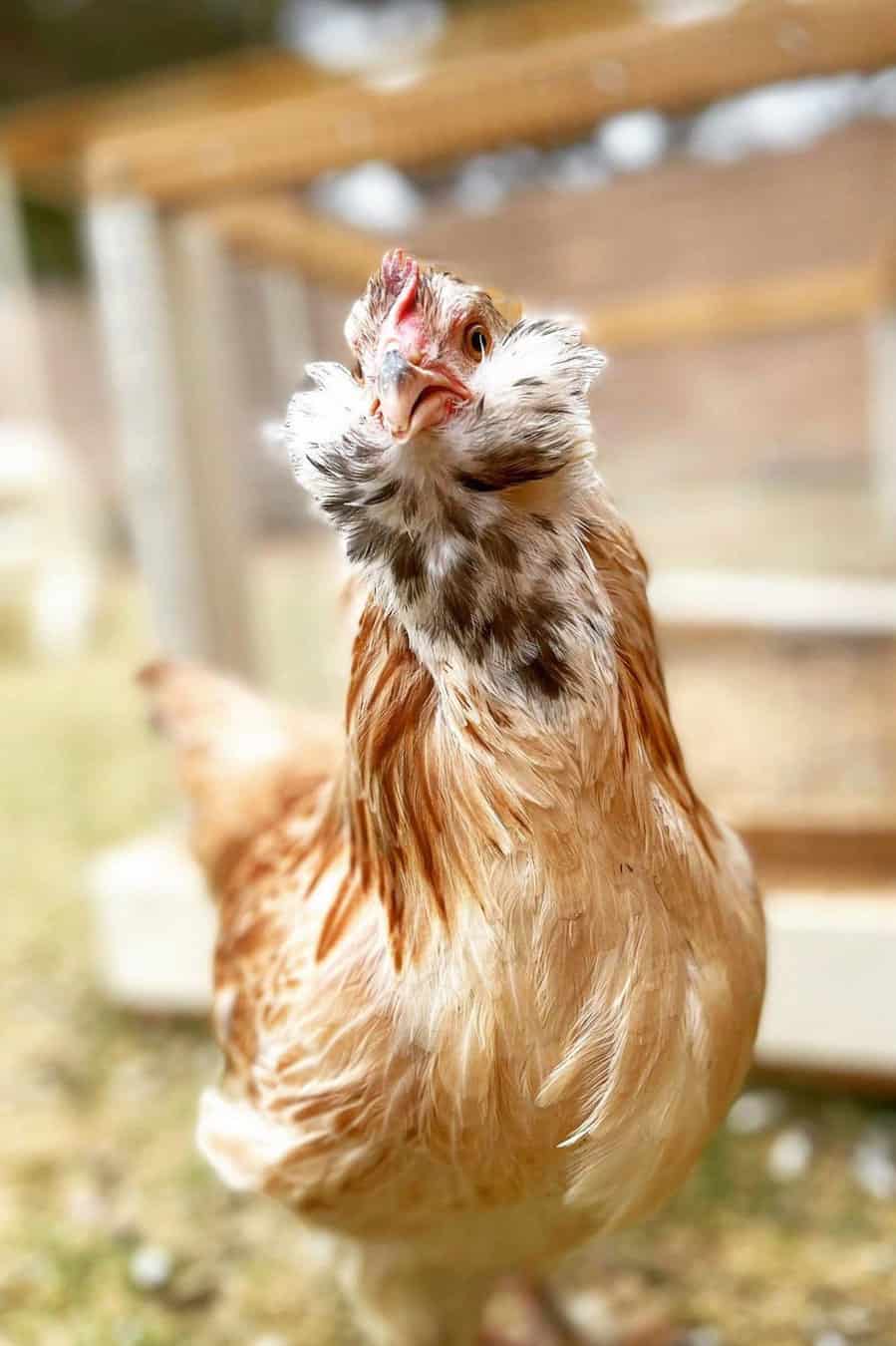 We do know that the Salmon Faverolles originated in France, but we are not sure exactly what breeds contributed to the lineage of the Faverolles of today.

We do know that they came from a village in the French countryside of the same name (Favorelles). Most experts believe that they are a mixture of Brahma, Dorking, Houdan, French Rennes, the Malines and the Flemish cuckoo.

We also know that French farmers sought barnyard birds that laid eggs well (enough to send to market) in addition to being “fleshed out” enough to sell well alongside those same eggs. Farmers also looked for a bird that would tolerate being confined to a coop.

At the time the Salmon Faverolles was developed, the Houdan chicken was the most popular. This was due to their propensity to provide meat and sell well at the market.

Houdan was also fairly good at supplying eggs, but they did not like being kept in a coop at all. In fact, due to being “cooped up,” the Houdan would develop bad habits that presented problems for the farmer as well as posing health problems for the Houdan chicken itself.

The Salmon Faverolle is named not only from the French village from which they are thought to originate, but the “salmon” part of their moniker has to do with the flecks of salmon-colored flecks of color on their chicken breast. In addition, their beak is a pinkish color (again, hinting at the color “salmon”).

The Faverolle is described as “fluffy” and “adorable.” They have a beard that comes to an adorable point at the bottom of their fluffy faces, and many owners say this is an endearing quality. 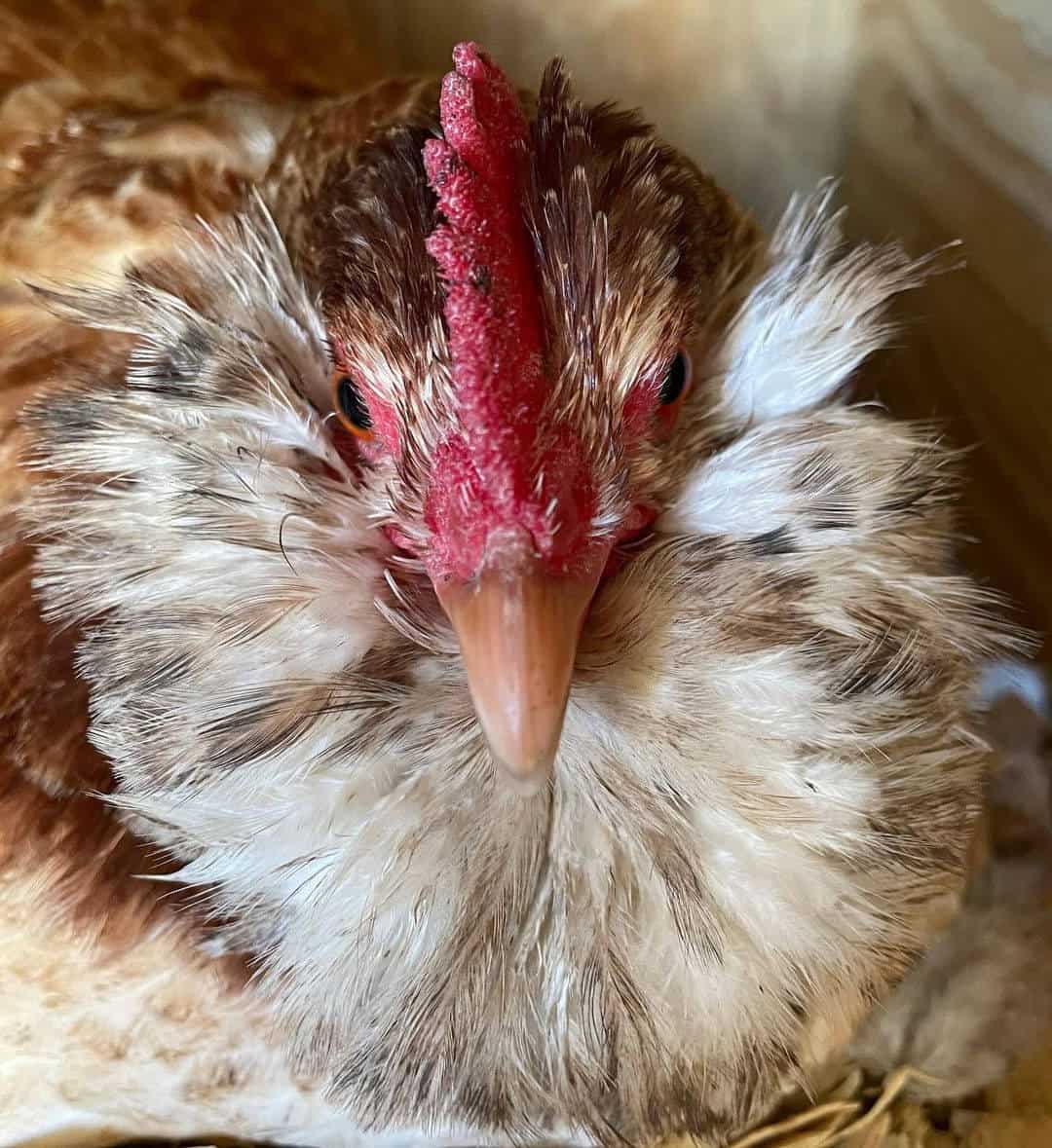 The Faverolles features a single comb that sports five points, a small (almost non-existent) wattle that, if present, is red in color (the comb is also red).

Another feature that makes the Salmon Faverolles appear larger than it truly is is the fact that its feathers tend to be loose and, again, “fluffy.” The color of the feathers is described as “a rich, honeyed salmon” color that is concentrated across the head, neck, and wings of the chicken.

The breast area of the Faverolles is white with the salmon speckles, and the muff and lower half of the body are more of a light cream color.

The under-fluff is gray in color.

It should be noted that these descriptions fit the Salmon Faverolles hen. The rooster is, well, a chicken of another color. The Salmon Faverolles rooster will sport a black beard, black breast, and black undercoat. The hackles, back, and saddle will all be the color of straw.

The rooster’s wings will be golden in color with the tip of the wing white. The Faverolles rooster will have shades of green in its tail, and the feathers on its legs will be black rather than white.

Both the rooster and the hen of this chicken breed are known as “regal” in the way they promenade about. 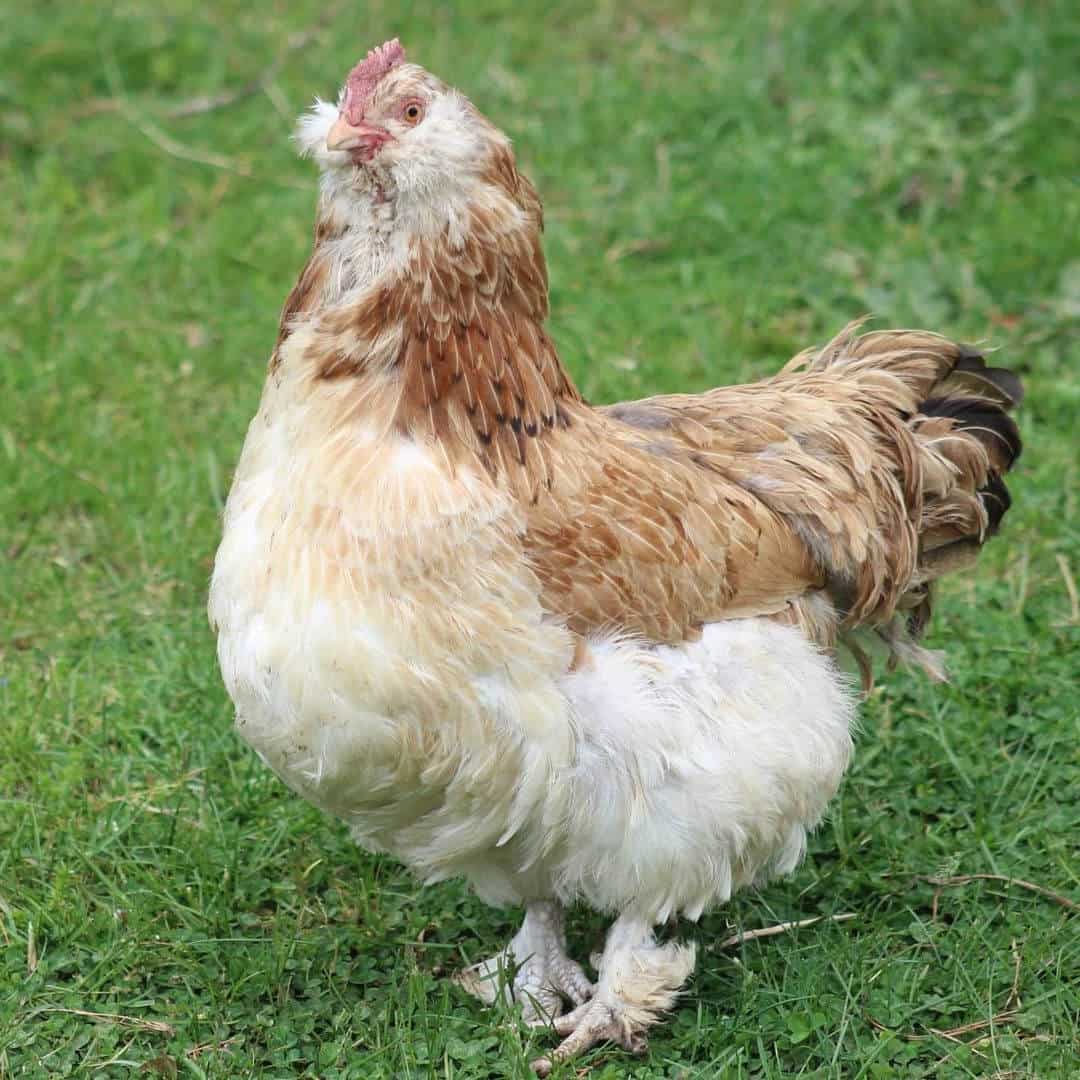 These summations can be chalked up to the fact that when humans appear in the barnyard, the Salmon Faverolles will march over to greet them (this is especially true if said human has ever proffered a treat or food to the Faverolles).

They are considered cuddly, not only because of their fluffy appearance, but also because they tend to tolerate and, in fact, interact with humans much more than other chicken breeds.

You might be surprised to find that Salmon Faverolles hens will enjoy a personal relationship with their humans; they particularly enjoy spending one-on-one time with people.

One expert (who also happens to own a few Faverolles) states that her chickens won’t even bed down for the night without her personally speaking to them and herding them toward their coop. She even laments that they chatter right back with her.

Only every once in a while you’ll find a Salmon Faverolles that has a bad disposition, but this is a rarity.

The Salmon Faverolles are so gentle that owners are cautioned to make sure that the Faverolles are not “bullied” or picked on by other, more dominant breeds of chickens. As far as “pecking order” goes, the Faverolles will often fall at the bottom of this hierarchy.

The Salmon Faverolles will lay approximately four eggs per week. This adds up to a total annual production of about 240 eggs per year! The eggs will be classified as medium-sized, and they are typically brown in color. Some eggs will, however, have a creamy tint to them. 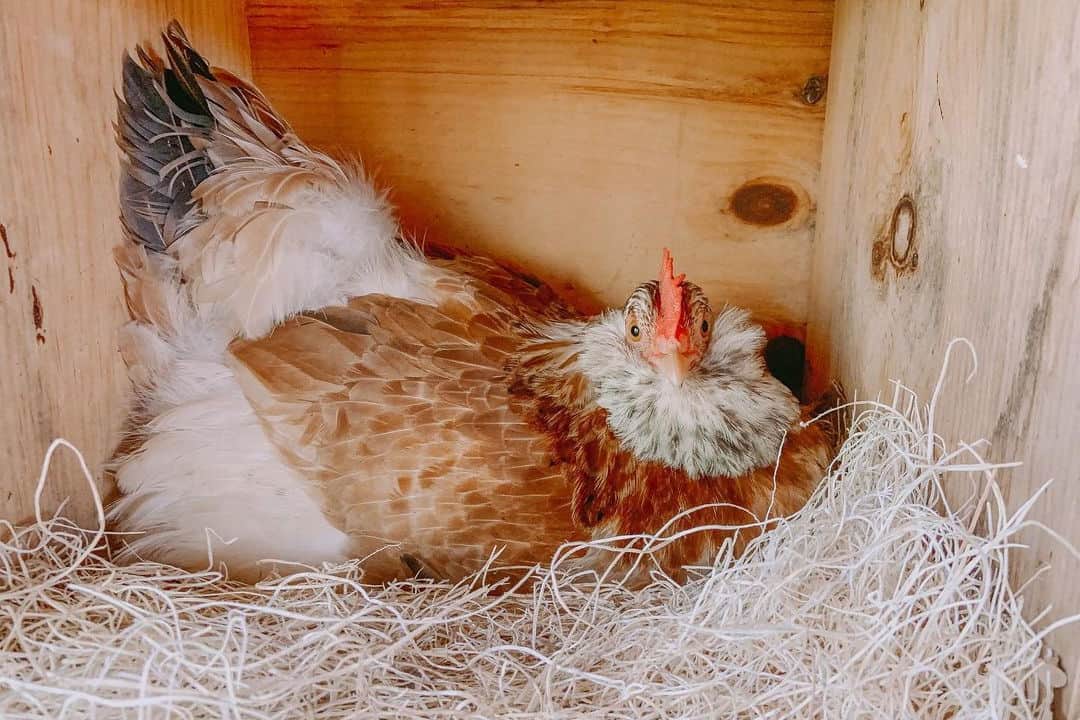 The fluffy feathers of the Faverolles can present a bit of a health problem to the chicken, so it is of the utmost importance that you keep a check and ensure that common parasites do not take up residence on the chicken.

One common issue that the Salmon Faverolles tends to have is the presence of lice in its fluffy feathers and under-fluff. Preventative measures mean simply checking the chicken for the presence of lice. If you observe them, you can treat the parasites quickly and easily.

It is when lice are left on the chicken for long periods of time that the chicken may develop further health issues. Be sure to check for lice in the feathery legs of the Faverolles as well.

The feathery legs of the Faverolles are also prone to becoming infested with mites. This problem is often one that is difficult to detect due to the leg feathers, so one must be proactive in looking for the scaly leg mites that may attach themselves to the Salmon Faverolles. 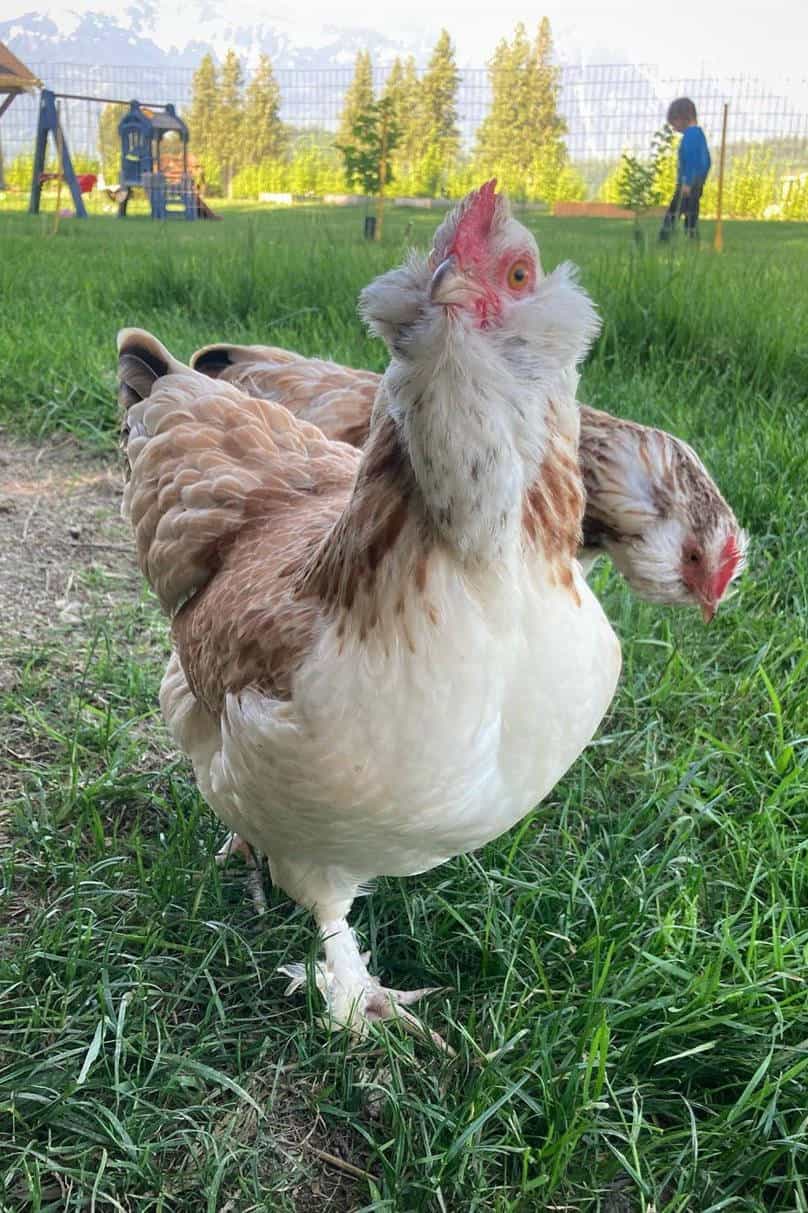 The Salmon Faverolles is a very sweet bird that loves to interact with humans, and this makes them quite wonderful as pets. They are not difficult to raise at all.

If you raise them from chicks, the Salmon Faverolles will be particularly bonded to you. Even if you do not, the Faverolles tend to be a “people” chicken. They will follow humans around the yard, and they will allow you to hold them quite often.

The Salmon Faverolles is not a difficult chicken to raise. They tolerate being confined fairly well, but they also need an area to forage outdoors. They need a safe place to roost, but for the most part, they tend to be docile, happy chickens.

The Salmon Faverolles is a happy-go-lucky chicken that actually enjoys being around humans. They are healthy chickens that produce a great amount of eggs each year. The hens are good “moms,” but not too broody. They are prone to be bullied by other, more dominant chicken breeds. 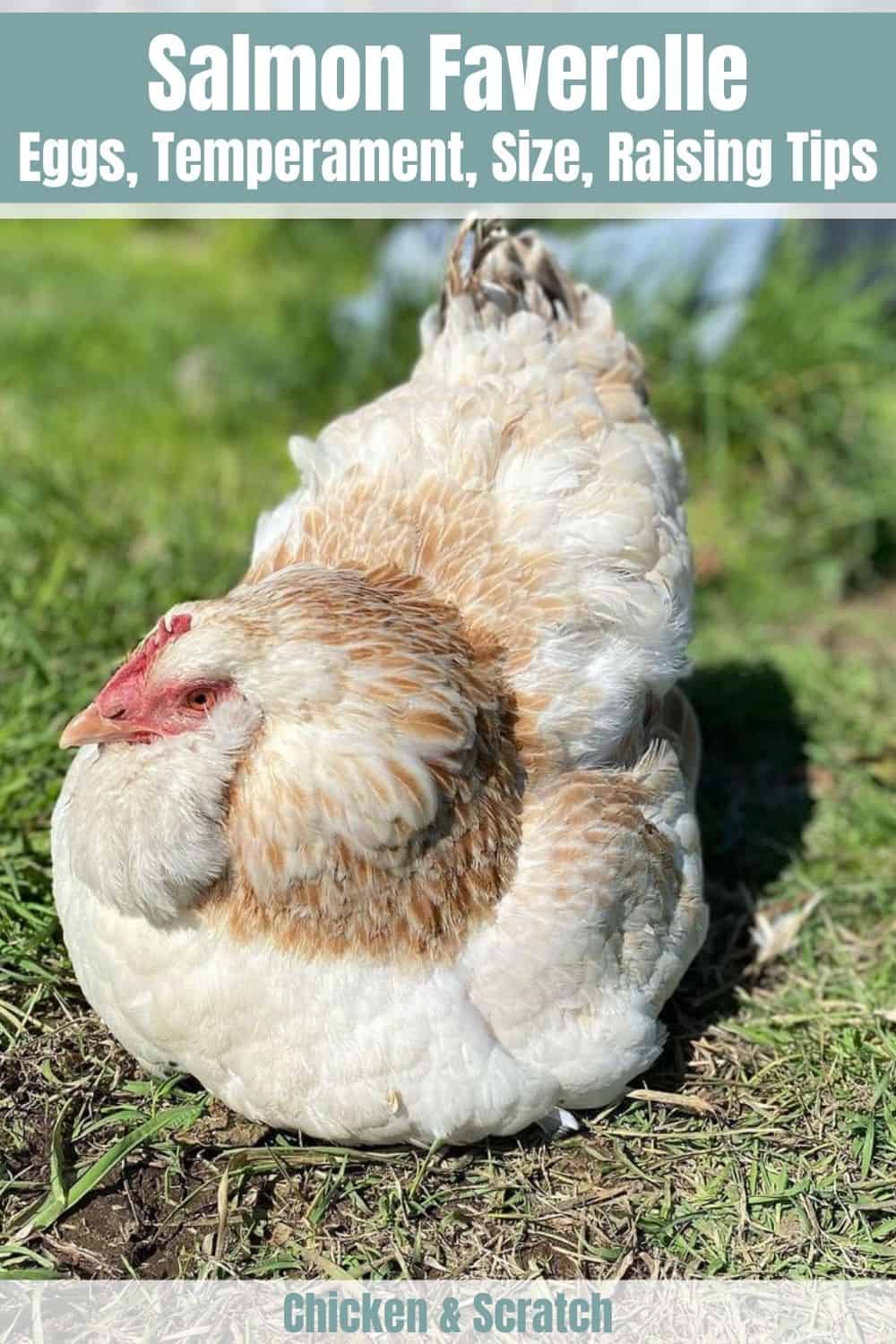