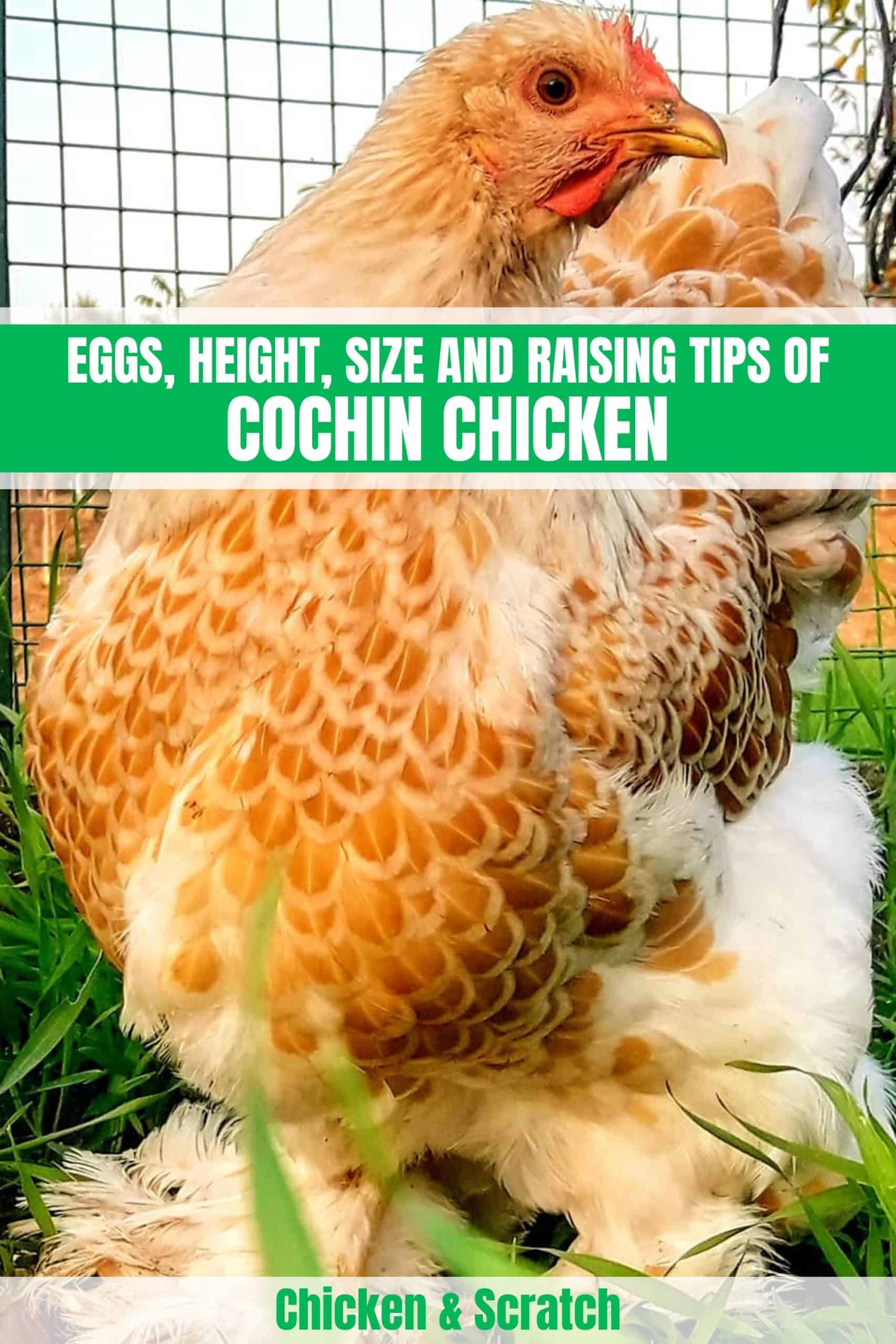 The fluffy, impressively-sized Cochin chicken is one of the most distinctive-looking breeds you can choose. Originally from China, these birds are quiet, docile, and sociable, and they come in a range of unique colors.

Whether you’re planning your first poultry purchase or want to add a few new birds to your flock, here’s what you need to know about the Cochin.

The American Poultry Association divides chicken breeds into classes, and the Cochin is a part of the Asiatic class. The group includes two other breeds: Brahmas and Langshans.

While we do know that Cochins first came to England from China, the exact origins of the breed are unknown. These birds were developed primarily to be used as meat birds, and breed developers emphasized both the size of the birds and the size of their eggs.

Cochins earned their place in history when they, along with Brahmas, started the 1850’s phenomenon known as “Hen Fever.” Once these two large, fluffy, and majestic new poultry breeds reached England from Asia, they inspired a wave of interest in poultry keeping from Europeans and Americans alike. 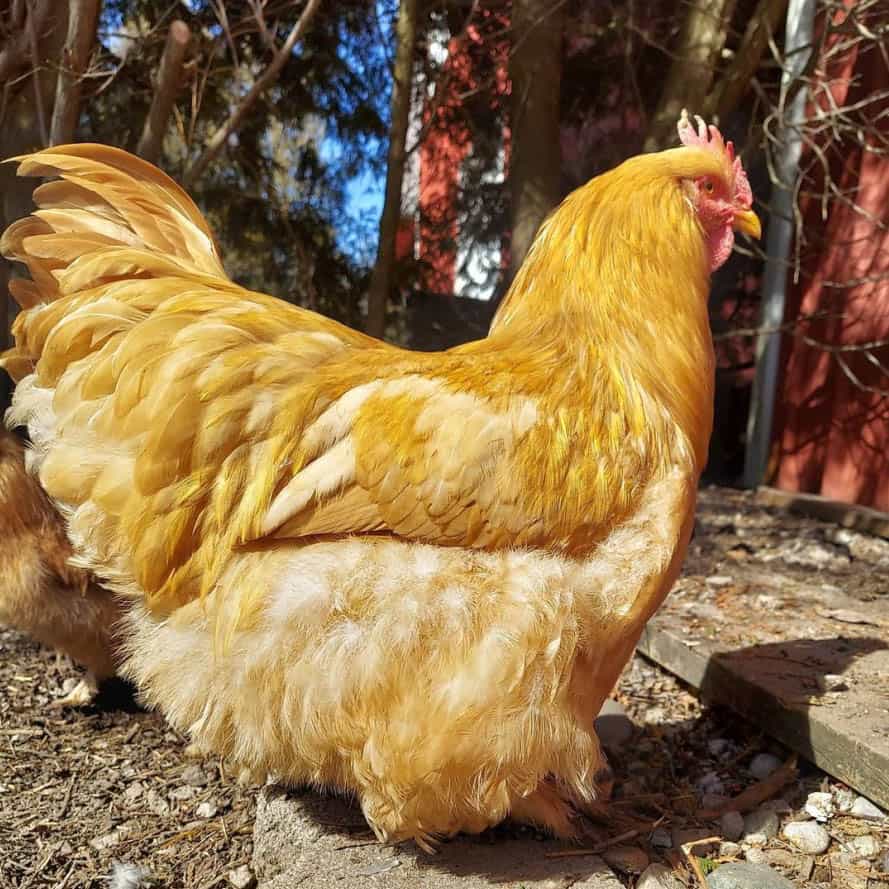 However, despite their large size and initial popularity, Cochins weren’t successful as commercial meat birds. This may be because they grow relatively slowly. And while they were never intended as commercial egg-laying birds, Cochins are fairly reliable layers with an interesting caveat–they tend to lay most during the winter.

Over time, the Cochin has been bred more for aesthetics. This means that meat quality and egg production have both suffered somewhat.

While Cochins were once incredibly popular, they are a heritage breed currently listed by the Livestock Conservancy as a “recovering” breed. This means that Cochins are no longer in immediate danger of extinction, but that they still need to be monitored.

This is likely due to their popularity as ornamental chicken–Cochons is beautiful to look at, and their easygoing nature and low level of activity mean that they tolerate the confinement of exhibition cages fairly well. Even for those who don’t intend to show them, the unique Cochin temperament makes them ideal to keep as pets. 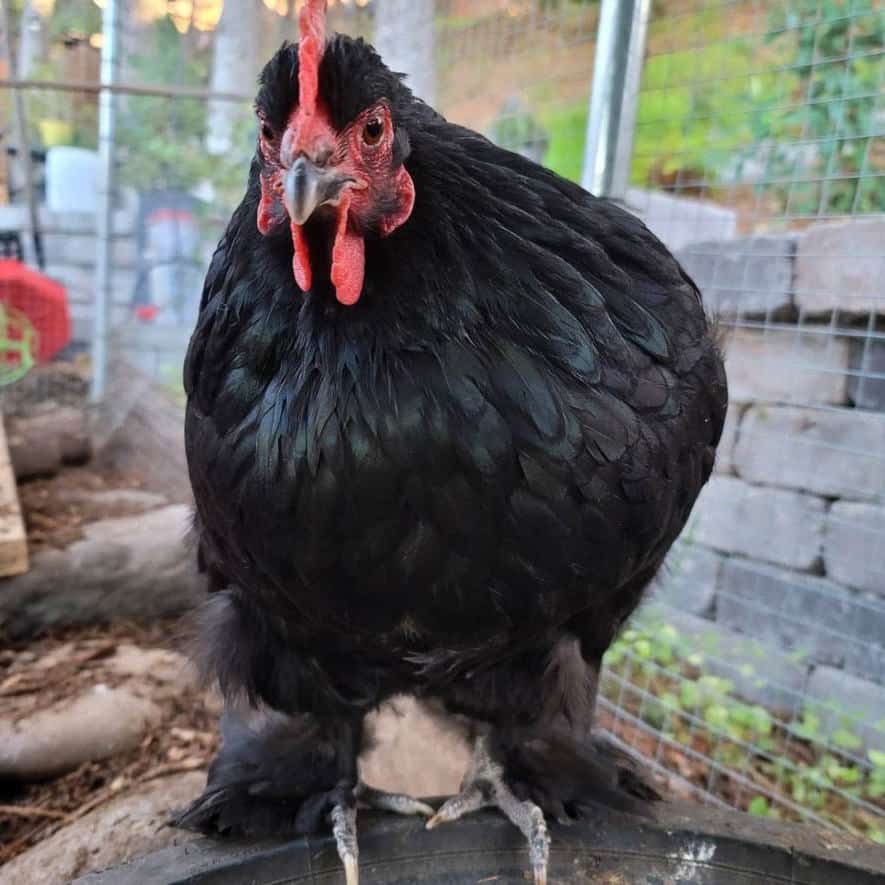 The Cochin was added to the American Poultry Association’s Standard of Perfection in 1874. Both the large fowl and bantam varieties are recognized, although bantam Cochins are called Peking bantams in the UK. Both large fowl and bantam birds are sturdily built, with ample feathering on their legs and toes.

The breed comes in several color varieties. The APA recognizes these:

While standard Cochins usually have feathering typical of most other breeds, they also come in a frizzle variety. Frizzle Cochins have feathers that curl outward, giving the birds a windswept appearance.

Cochins are known for their extraordinarily docile temperament. Due to their large size, it’s difficult for them to fly, which makes them easy to confine even with short fencing. That said, these slow-moving birds tolerate confinement very well. They aren’t usually as fast-moving as lighter breeds, and they aren’t avid foragers.

However, anyone who has owned Cochins will tell you that their temperament makes them excellent pets. Cochins seem to like to be held, and some owners have even posted social media photos of their Cochin hens in strollers. Because they seem to do well with people, Cochins are also good pets or children. 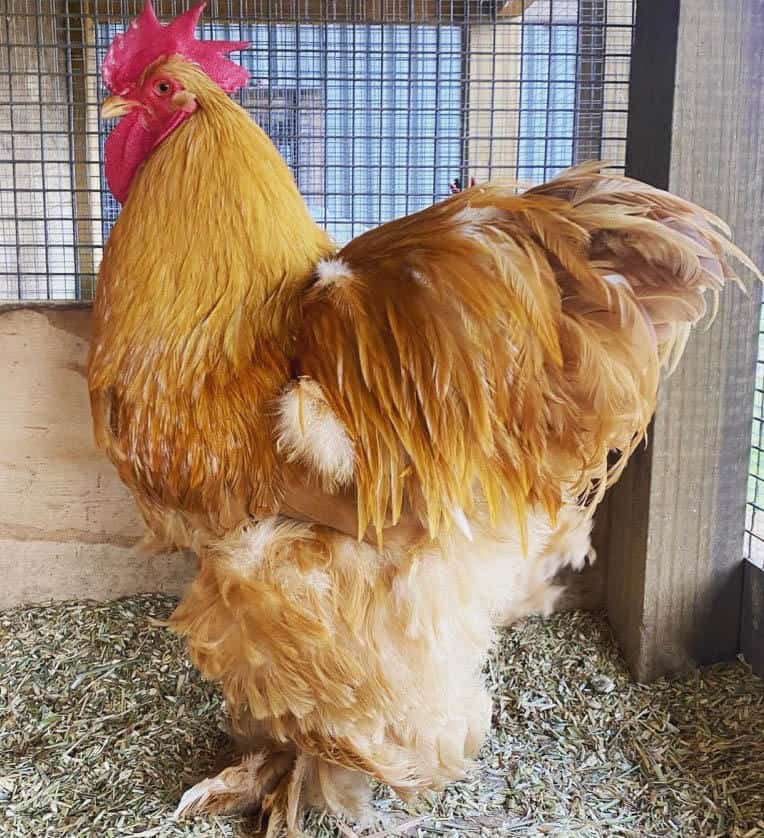 When it comes to flock dynamics, Cochins are also a great choice. They’re very peaceful, and most of them don’t antagonize or pick fights with other birds.

Cochins also are superb broody hens, and some roosters even will take turns sitting on the nest. Unlike some breeds, Cochins take good care of their chicks–this video shows a mother hen teaching her chicks to take dust baths.

If you’re looking for a flock that reliably produces a large volume of eggs, Cochins may not be right for you. Since they mature relatively slowly, hens usually don’t start laying until they’re eight to nine months old. Most other breeds start at about six months, with production breeds starting at about four.

Cochins also only lay about 150-180 eggs per year. Their eggs are light brown, and they can be large. But while Cochins aren’t the most productive layers, they are some of the best chicken parents imaginable.

Cochin hens are known for easily going broody, and they will even willingly hatch eggs that aren’t theirs. If you raise a breed that isn’t often broody (like Welsummers), it may be worthwhile to purchase a Cochin hen or two–they can both hatch and raise chicks, and they are mild-mannered enough that they won’t make waves in an established flock. 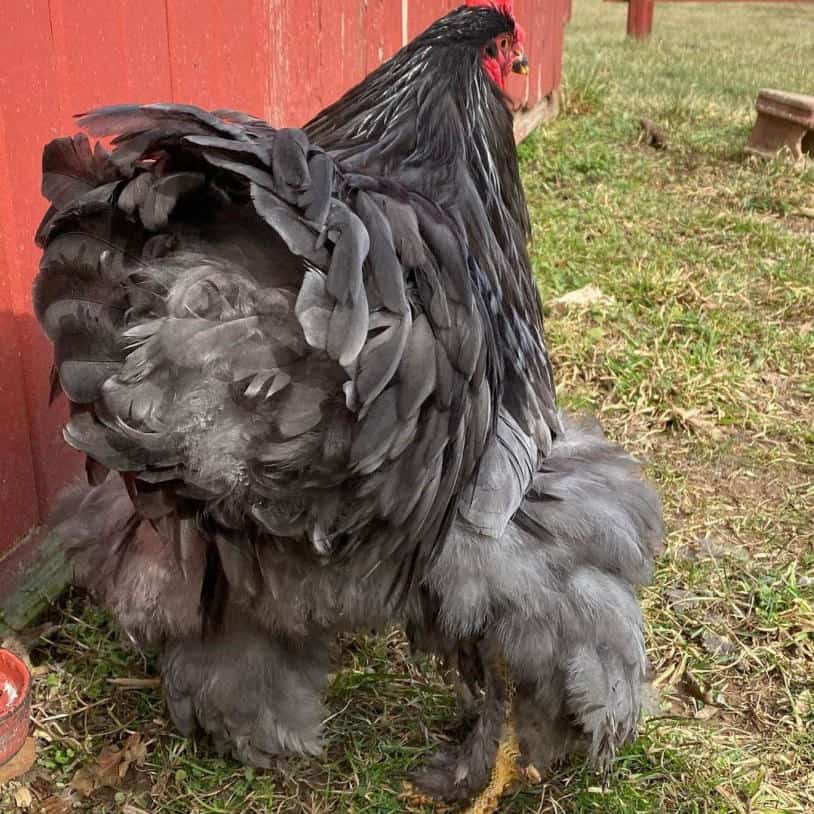 While Cochins make a wonderful addition to just about any flock, they aren’t without health issues. One potential issue to be on the lookout for is obesity. Cochins are large birds who move slowly, and they prefer eating the food you give them over foraging. If possible, measure and ration their feed to avoid weight gain.

In mixed flocks, this can be difficult or impossible, so it may be wise to regularly weigh your Cochins to make sure they aren’t gaining too much weight.

Due to their very fluffy coats, it’s very difficult to assess changes in body mass just by looking at them. While Cochins aren’t too interested in foraging, it’s a good idea to give them access to grass. If they’re hungry, this gives them something low in calories to eat. 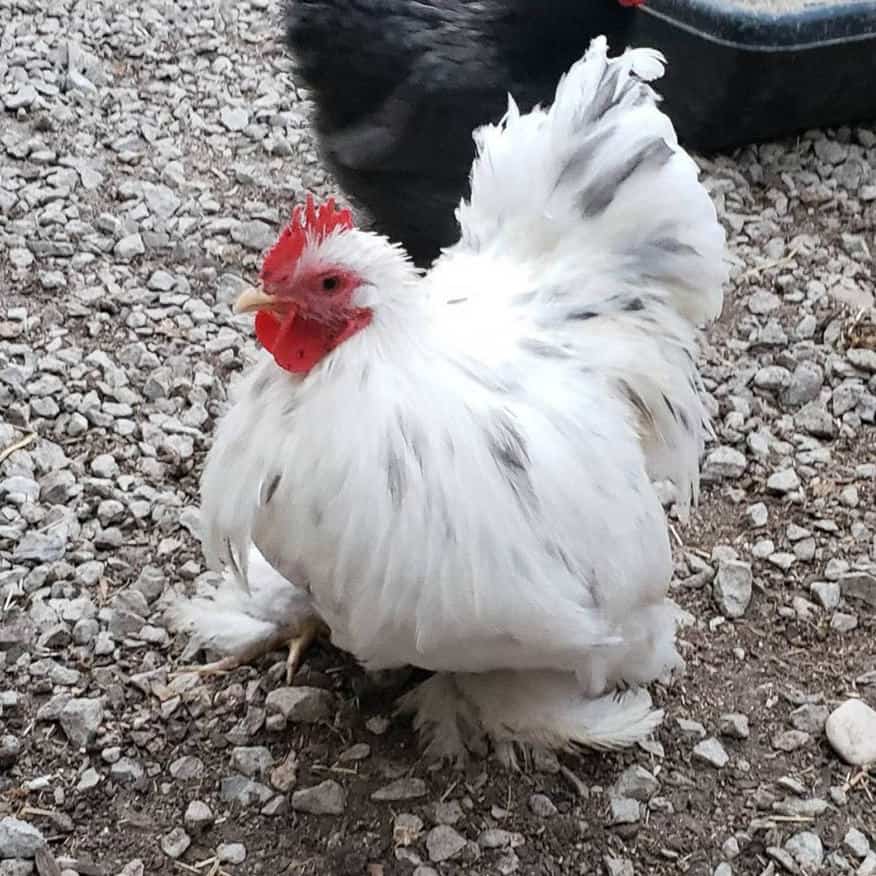 Cochins also are at risk of frostbite if their feet become muddy. These birds have very densely feathered legs and toes, and when mud cakes on, it can become frozen. This puts the birds at risk for frostbite, which can mean they need toes amputated in severe cases.

Because of their extremely dense feathering, Cochins have trouble staying cool in hot weather. If you live in a warmer climate, make sure they have access to plenty of water, and that they can access shade to get out of the heat when necessary.

Their dense coats are also susceptible to poultry mites–be sure to regularly check them and treat any mite issues that may arise. 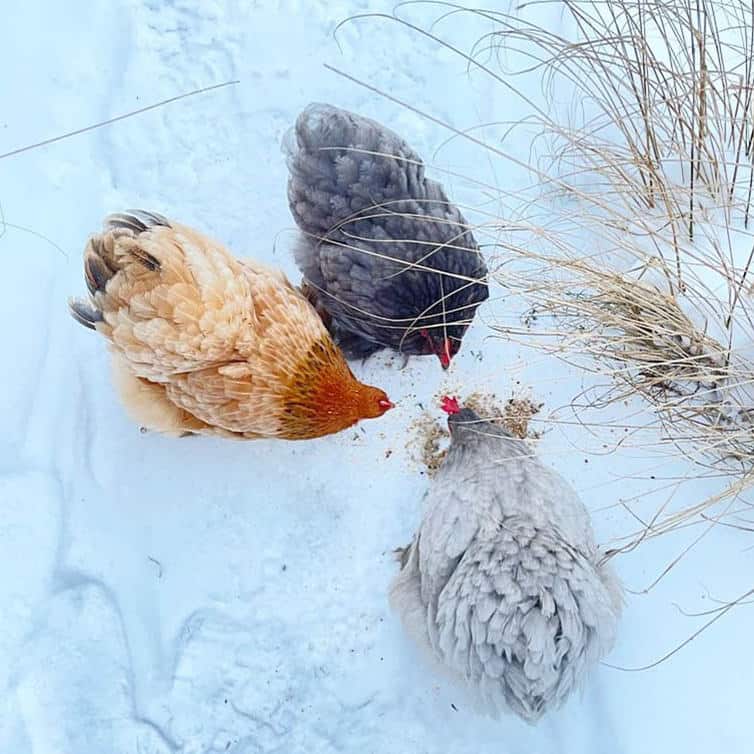 Aside from their predisposition to obesity, Cochins are fairly easy to care for, and their care is fairly similar to what’s needed for most breeds. If you’re considering adding some Cochins to your flock, here are some tips to keep them happy and healthy:

Protect Them From Predators

One of the advantages of keeping Cochins is that they can be confined with short fences. However, when making an enclosure or outdoor play area, remember that fences are also necessary to keep predators out.

A shorter fence is ok if you only let your birds roam with close supervision, but if you’re making a permanent structure, make sure it’s tall enough to keep predators out.

While Cochins can be free-ranging birds, their large size and slow movements make them a prime target for hungry predators. If you want to let your birds roam, make sure you have a few large bushes or similar hiding areas–these will give your Cochins shelter if they see an airborne predator. 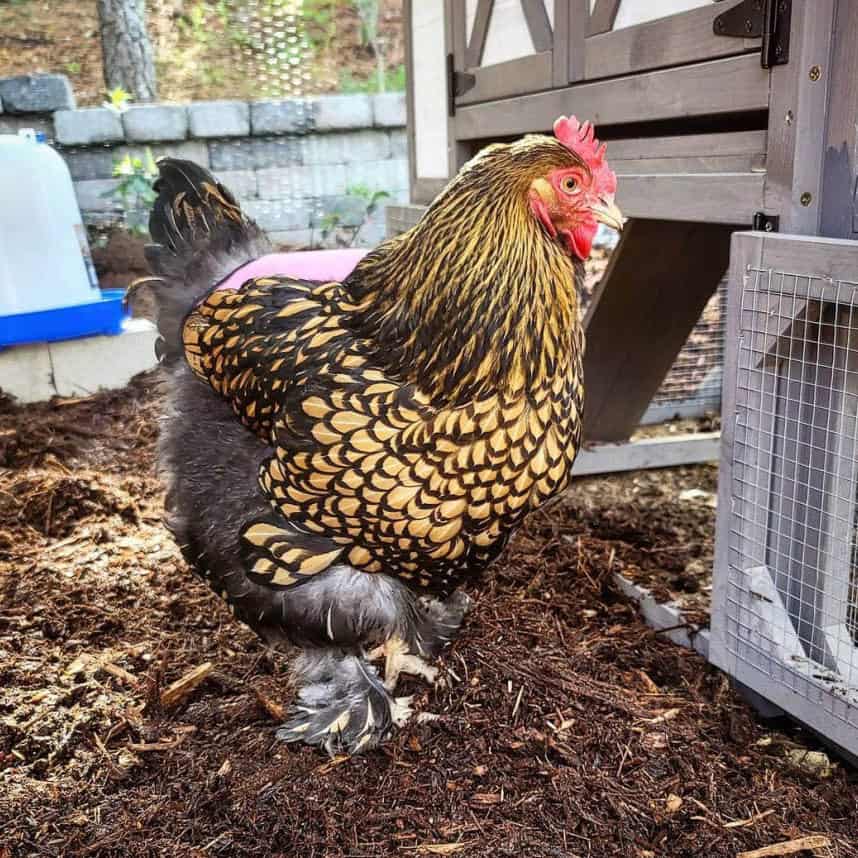 Part of the draw of the Cochin is its beautiful, abundant plumage. However, the extra feathering on these birds means you may need to take additional care to keep your flock in good health. As mentioned earlier, the plumage on their feet can easily become wet and muddy.

make sure to clean your Cochins’ feet as needed, since this can help them avoid foot disease as well as frostbite in the colder months. It’s also good to regularly check them for poultry mites, which often make themselves at home in Cochins’ thick undercoats.

It’s often necessary to carefully ration food for Cochins, but you also can offer them healthy treats to keep weight off and give them something lower calorie to eat.

Greens, vegetables, and fruits (in moderation) will add some dietary variety. Additionally, you can also spread out their feed (or create multiple feeding stations) to encourage them to stay active. 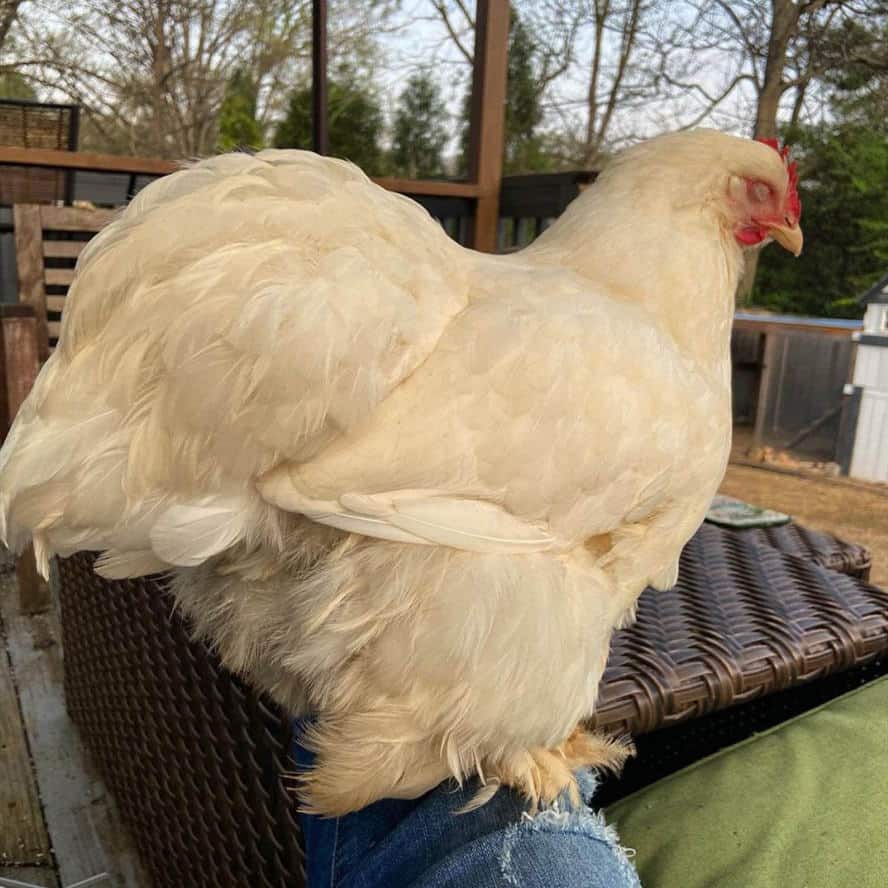 For the exhibition breeder or the backyard poultry keeper, the Cochin is a sweet-tempered, easy-keeping bird. Their beautiful feathering makes them a great aesthetic addition to any lawn, and their laid-back attitude means they won’t add drama to your flock. When you bring home a Cochin (or several), you’ll be adding some joy to everyday life. 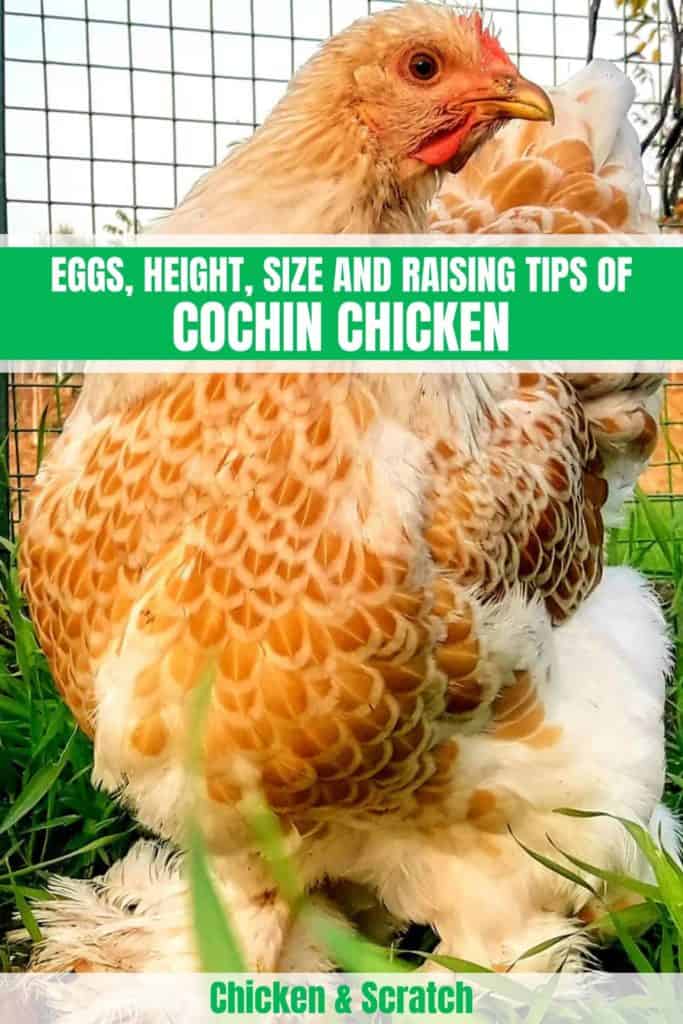