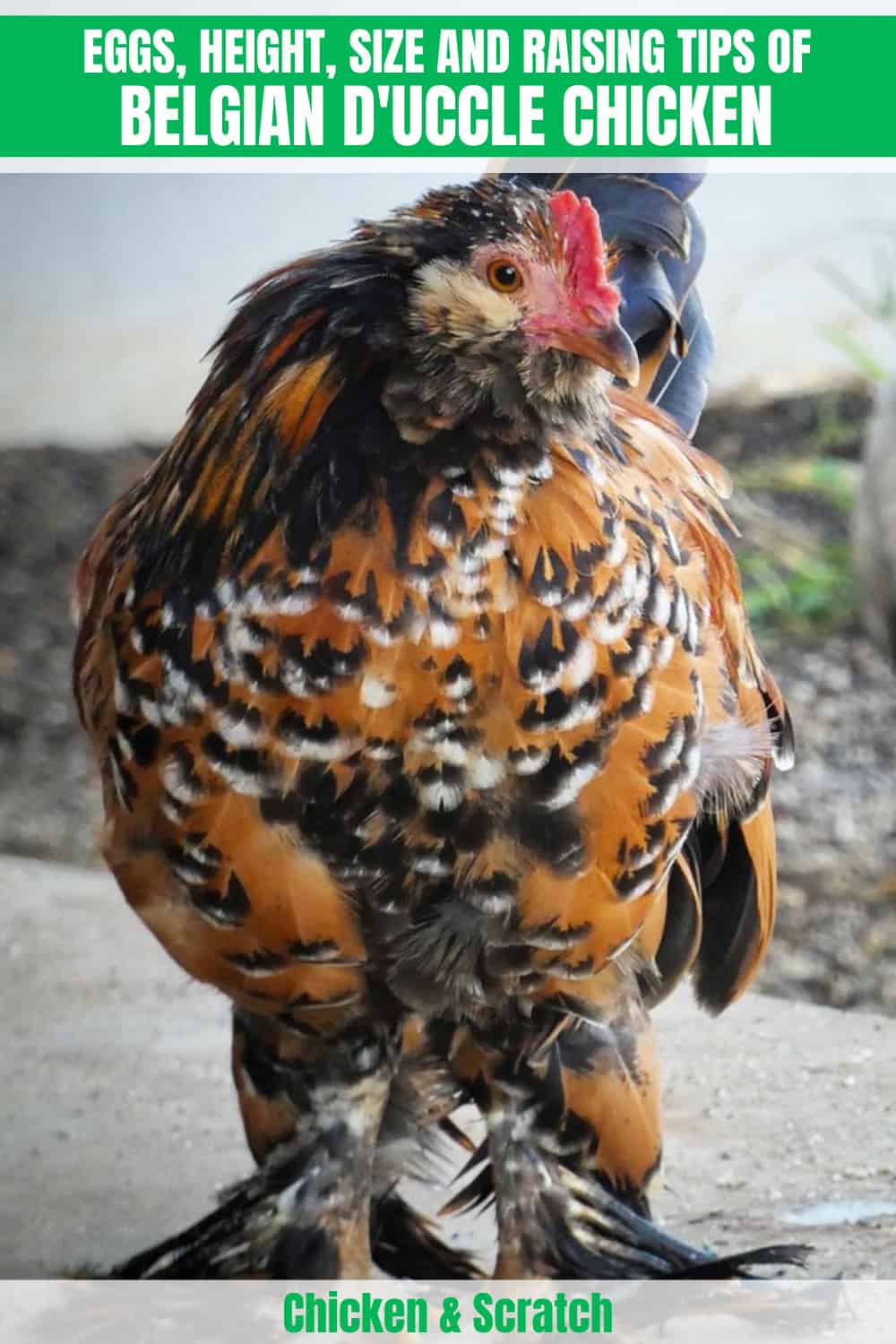 Lovely, frilly, and sweet mannered, Belgian d’Uccle chickens are an excellent addition to a backyard flock. Their curiously fluffy legs and bearded faces make them look almost cartoonish. An easy-going disposition matches their refined appearance. Read on to find out why the Belgian d’Uccle chicken is one of our favorites.

As the name suggests, the Belgian d’Uccle chicken breed originated in Belgium in the city of Uccle. Sometime between 1890 and 1900, Michael Van Gelder bred the d’Uccle. Most likely, the seed stock came from Dutch Boooted Sablepoot and Antwerp Bearded bantam breeds.

The Belgian d’Uccle was accepted in 1914 into the American Poultry Association’s (APA) Standard of Perfection. At the time, the three recognized colors were mille fleur, porcelain, and white. Now six additional colors are accepted by the APA and the American Bantam Association (ABA).

In 1905 the first Belgian d’Uccle was entered in a poultry show. It took him several years of hatching more than 1,000 chicks per year to get the right genetic material for his vision.

Robert Powells and Louis Van der Snickt assisted and advised him respectively on his mission. The goal was a bearded bantam chicken with “boots,” or feathered legs and feet. 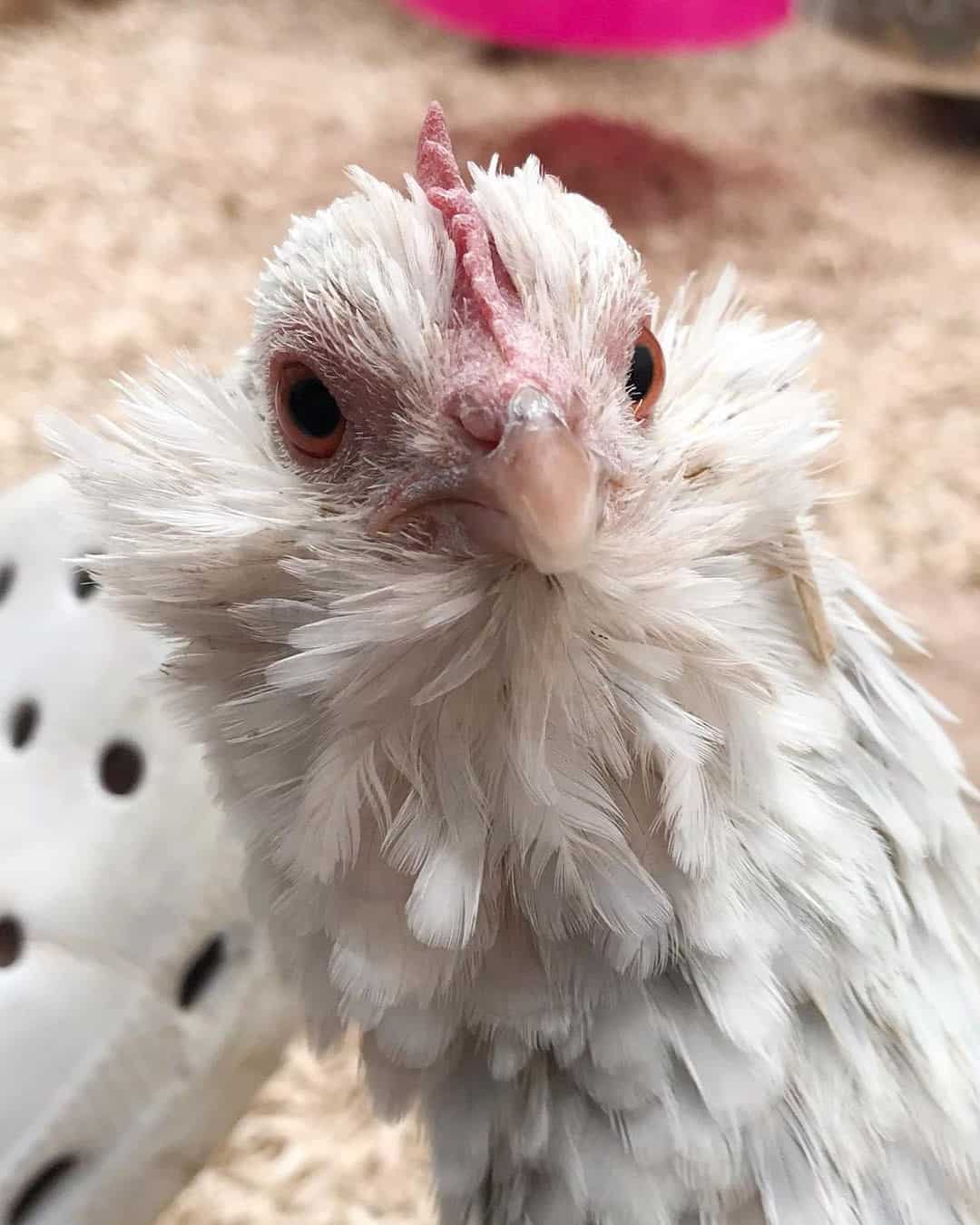 The charming appearance of the d’Uccle chicken earned them the nickname “fleur Vivante de nos Jardins.” In other words, “living flowers of our gardens.”

Competition from similar breeds from neighboring countries didn’t happen the popularity of this little flower. Though many breeds like the Sablepoot and Booted Bantams are similar, none have quite the appeal of the Belgian d’Uccle.

The Belgian d’Uccle became so beloved in England that it beat out their own creation the Booted Bantam in popularity. The English continued to tinker with and expand the breed to their tastes.

Unlike in the U.S.A., there are over twenty recognized breed colors in Europe. The quail coloration is one of the finest colors to come from British breeding programs.

Efforts by breeding clubs to renew interest in this vintage breed have resulted in a surge in popularity since 1969. Now a Belgian d’Uccle chicken stands a good chance of winning bantam breed poultry shows. Their refined aesthetics make them an absolute stand out. 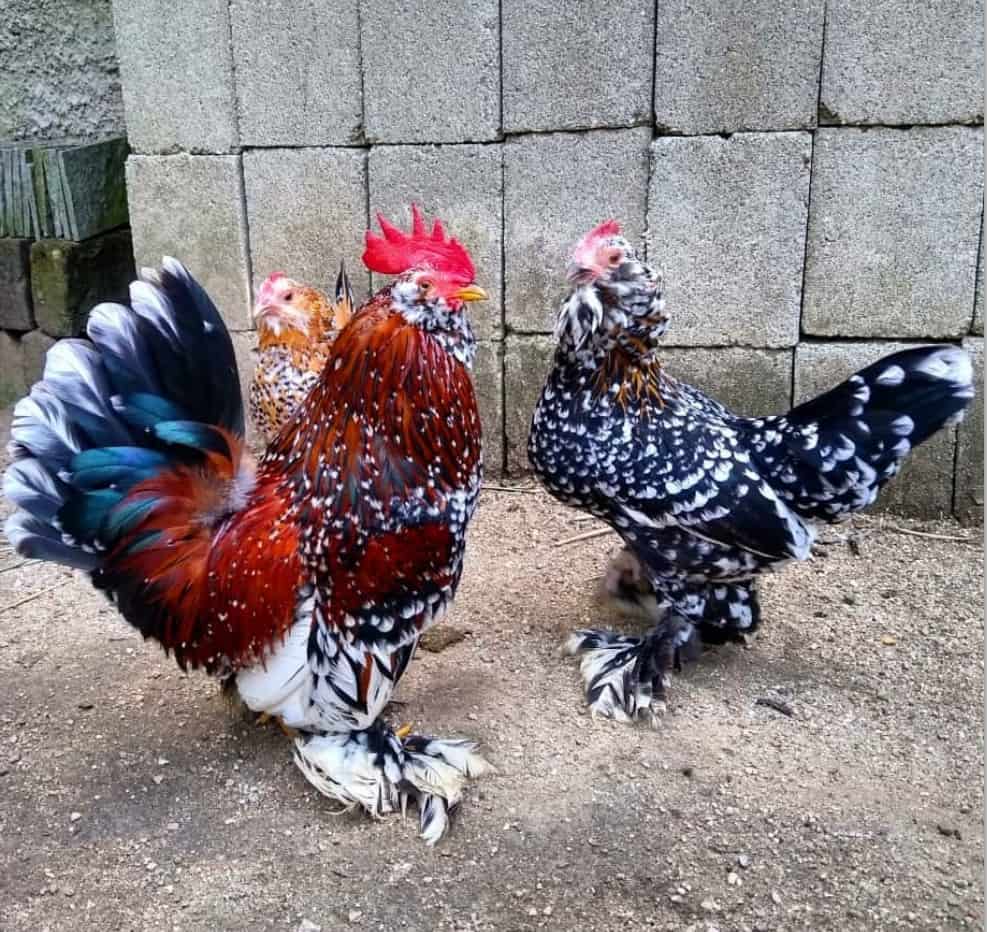 Belgian d’Uccles are easily confused with Bearded Antwerp, Booted Bantam, and Sablepoot chicken breeds. Careful attention must be given when observing and judging them. With a little experience, it is not too difficult to tell which one you have.

A Belgian d’Uccle chicken has a bearded face, whether it’s a hen or a rooster. Beards, or muffs, are fluffy feathers on the face of the bird. They grow under the beak and the eyes, like a beard on a man. The three lobes of feathers forming the beard are to be very full, growing backward to meet the neck hackles.

In addition to their beards, Belgian d’Uccles have fully feathered legs and feet, called boots. You should not be able to see the scales of the legs or feet through the feathers.

The final distinguishing feature of a d’Uccle is the size and backline. All are small in stature, with the roosters weighing 1 lb 10 oz and the hens 1 lb 6 oz. The back and tail should form a “V” shape, not a “U.” The head and tail are held high, and the chicken should have a broad chest.

Belgian d’Uccles are a calm, friendly bantam chicken breed. The roosters and hens are all fairly quiet. The hens will let out an egg song, and the rooster crow is high pitched. It isn’t a very big problem unless you have a particularly talkative chicken. Most d’Uccles don’t make noise frequently.

Bantam chicken breeds are more susceptible to bullying by larger breeds. Belgian d’Uccles are no exception. If you keep a standard breed chicken flock, consider housing your Belgian d’Uccles separately.

It is rare to get a Belgian d’Uccle that is aggressive towards people. Most are calm and can be easily trained to respond well to human interaction.

Some chicken keepers have luck training their d’Uccles to fly up into their laps and tolerate being held. Even their interaction with other d’Uccles tends to be mild and gentle. Given enough room and food, fighting is not much of an issue. 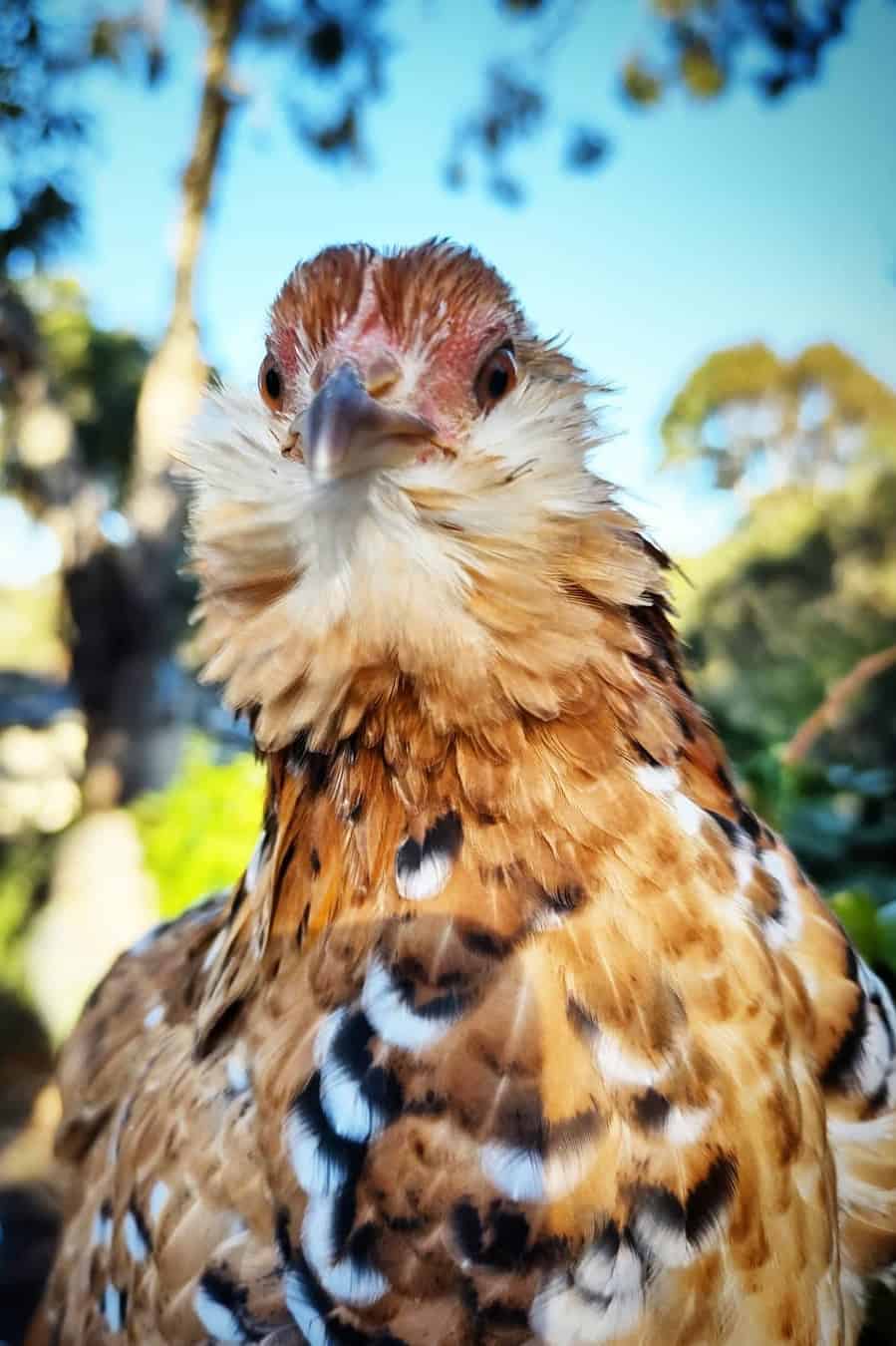 No bantam chicken breed is an egg-laying workhorse. Belgian d’Uccle hens can be expected to lay a couple of times per week. You’ll get about 100 eggs per year, assuming she doesn’t go broody.

Some chicken keepers appreciate the lower egg count. They aren’t forced to deal with several dozen eggs per week from their flock. If you don’t have a large family but want to enjoy keeping several chickens, d’Uccles are a good choice.

The eggs are small and cream-colored. They weigh just a little over 1 ounce. You can substitute two d’Uccle eggs for every one egg listed in a recipe and come out okay.

Belgian d’Uccles have a tendency towards broodiness, as do most bantam breeds. If one of your d’Uccle hens goes broody, her egg production will stop until several weeks after her clutch hatches. This will naturally lower her overall yearly egg total.

A broody d’Uccle chicken tends to make an excellent mother hen. They typically sit on the nest faithfully and have good hatch rates. Once the chicks are hatched, they are adept mothers. The activity level of d’Uccles helps her easily show the chicks the ropes, so they have high survival rates. 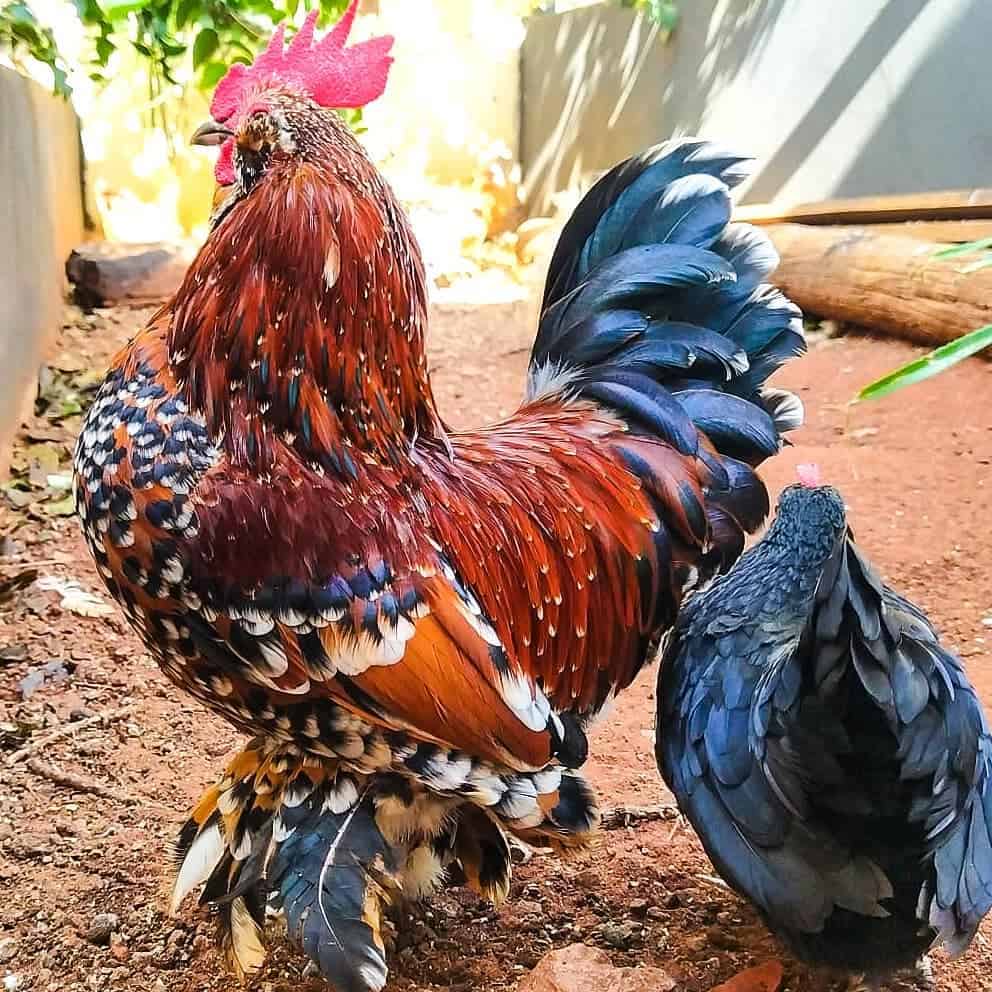 All chicken breeds are susceptible to the same ailments. When you become a chicken owner, there are a couple of main ones you have to watch out for. Other, rarer diseases and conditions do not affect most flocks.

Coccidiosis is caused by the coccidia parasite found in infected chicken droppings. Your flock may pick it up from a new chicken you introduce from another breeder or hatchery.

Coccidiosis can be lethal, especially in a young or weak chicken. The main concern is spotting it in time. Paleness, huddling, lethargy, and bloody or watery diarrhea are all symptoms. If you notice these symptoms, dosing your flock with Amprolium will kill the coccidia parasites.

We have a complete guide to treat and prevent chicken coccidiosis if you are wanting something more specific.

Marek’s disease is one of the most prevalent diseases chicken keepers have to contend with. Tumors develop inside your birds and cause a large array of symptoms if any display at all. Signs of Marek’s include paralysis, wry neck, weight loss, and grey irises. There is no treatment for Marek’s. A vaccination does exist to attempt to lessen the spreading of Marek’s.

If you have a chicken with a positive Marek’s diagnosis, it is best practice to cull it. 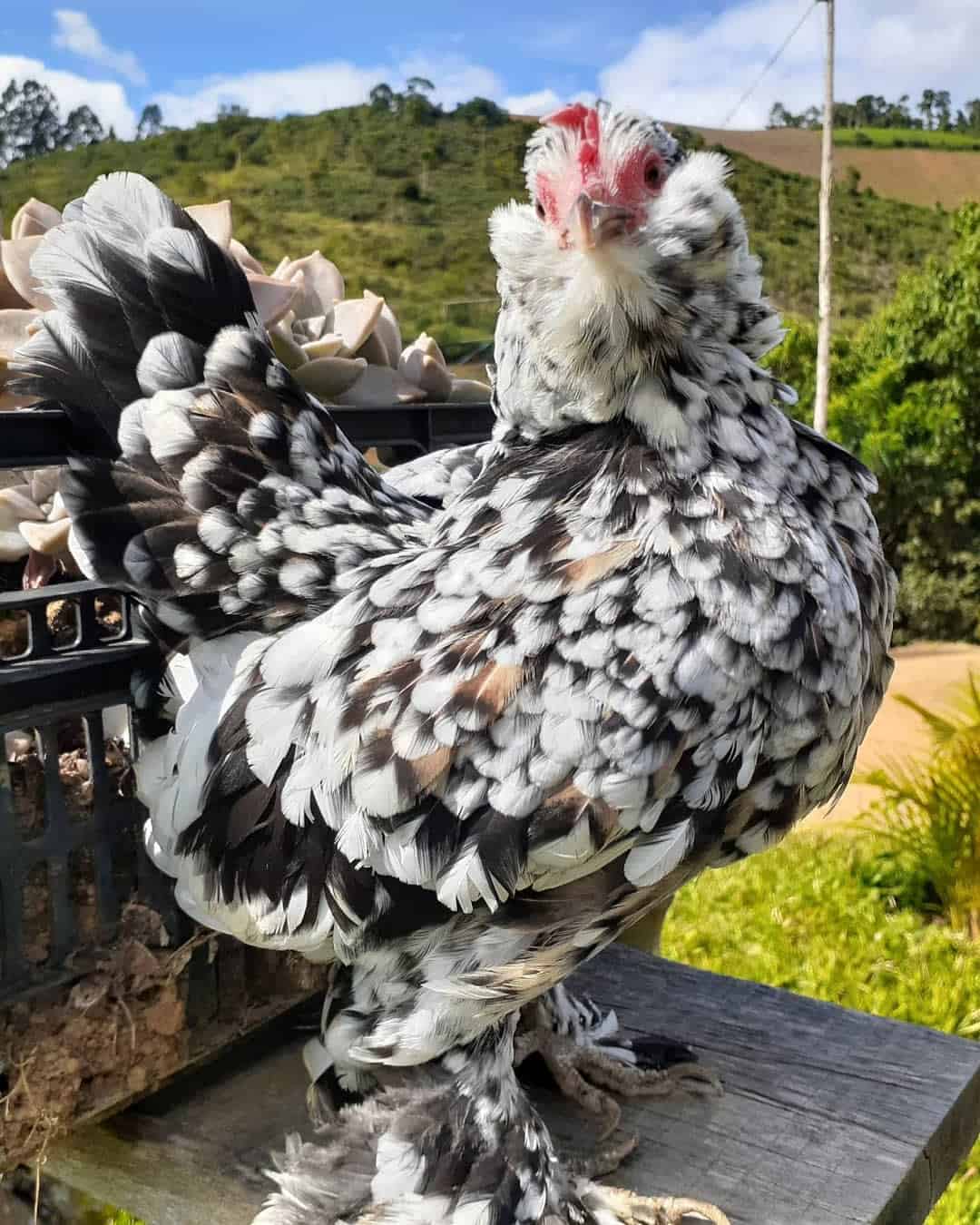 Raising a flock of chickens is not very difficult. They have a few basic requirements, like all animals. Once you have those down pat, you can take your time learning the rest.

Belgian d’Uccles are an active chicken breed. They do well foraging for their food. If you don’t want to free-range your chickens, you need to accommodate their desire for room to roam.

Make sure your chicken run has plenty of space to prevent boredom and enables them to exercise adequately. Your coop also has to have enough roost space for each bird to stretch its wings to prevent fighting.

If your only experience with chickens is from standard or large breeds, you’ll have to readjust to bantams. You may think that a four- or five-foot-high fence is enough to keep them in – it’s not. Belgian d’Uccles can fly better than most standard breeds because of their lightweight. If you’re keeping them in a run, you’ll have to put a top on the run to prevent escapees. 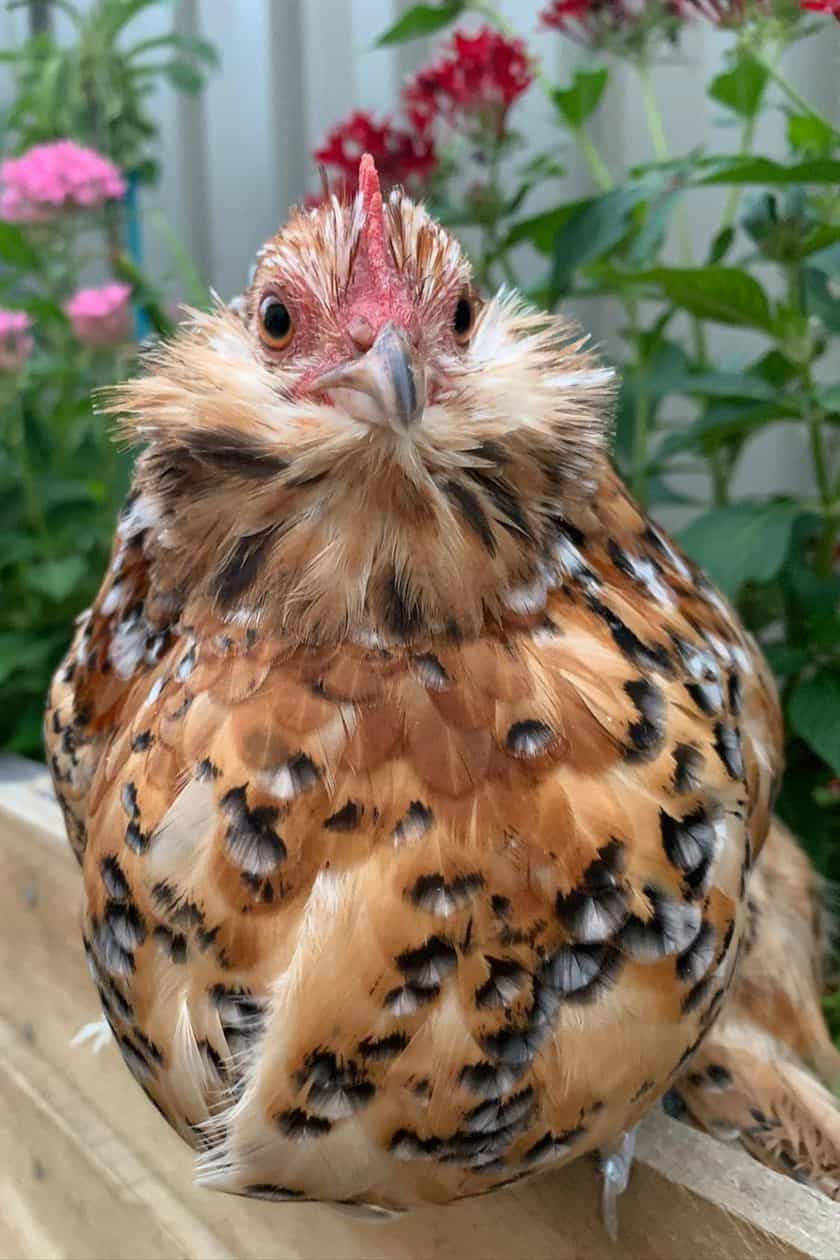 3. Keep their food and water separate

Unless you keep a flock exclusively consisting of bantam breeds, you’ll need to have more food and water stations available. Larger chicken breeds may have between five and eight pounds on a fully grown Belgian d’Uccle rooster.

They can easily get chased away from feed and water if there aren’t other options for them. A chicken that is suffering from hunger and thirst can get sick and die much more easily.

Those pretty feathered feet are more susceptible to mites than clean legged chickens. Mites can easily cling to the feathers touching the ground and infest your d’Uccles.

Chickens combat mites by dust bathing. Rolling in dirt knocks parasites, so they are suffocated between the chicken and the ground. Make sure you have enough room that several chickens can dust bathe.

Belgian d’Uccles are a gentle, lovely chicken to add to your flock. Their old European flair is so mesmerizing when you watch them move across the yard in search of bugs. If you’re thinking of bringing some of these beauties home, go for it, you’ll never regret it. 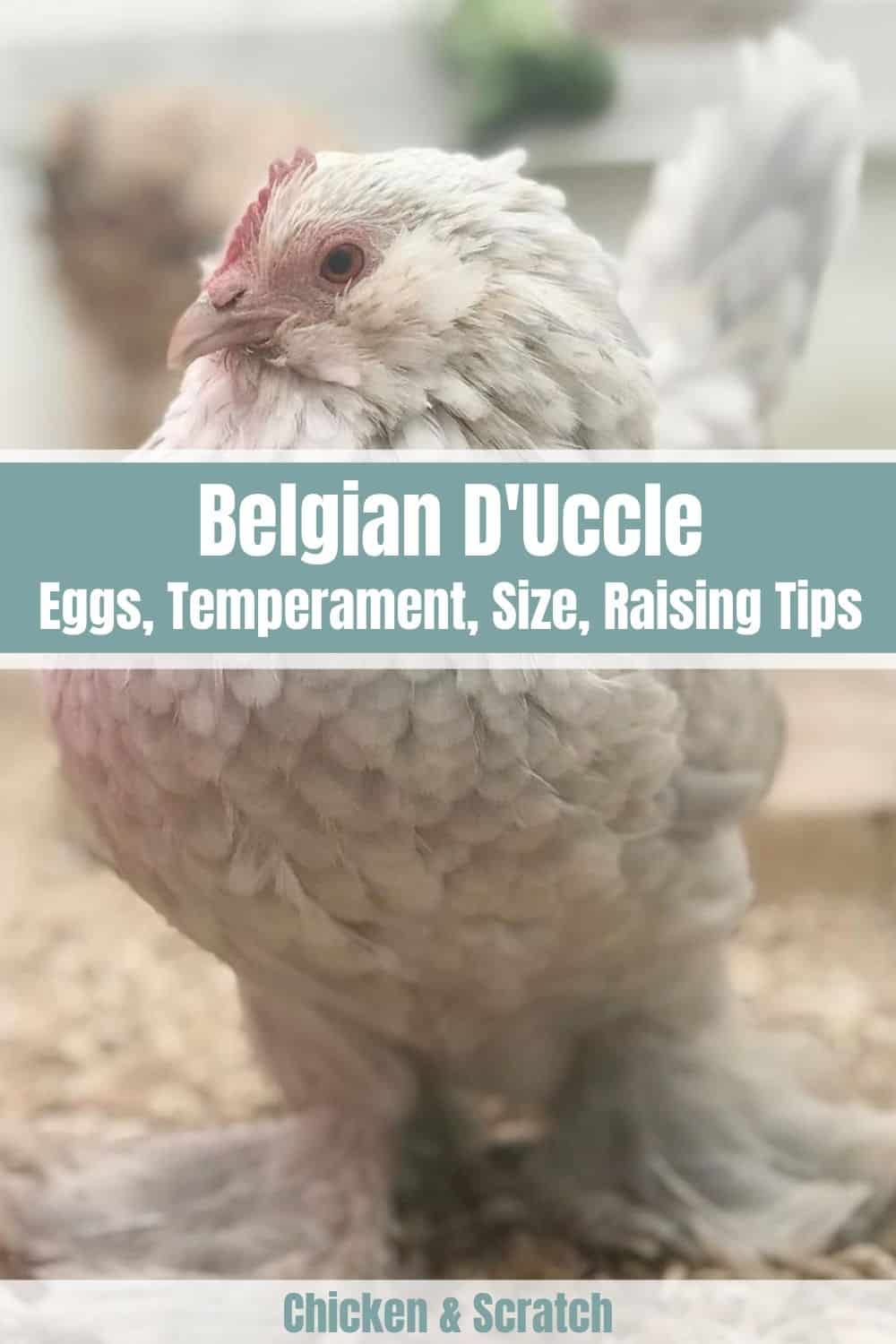